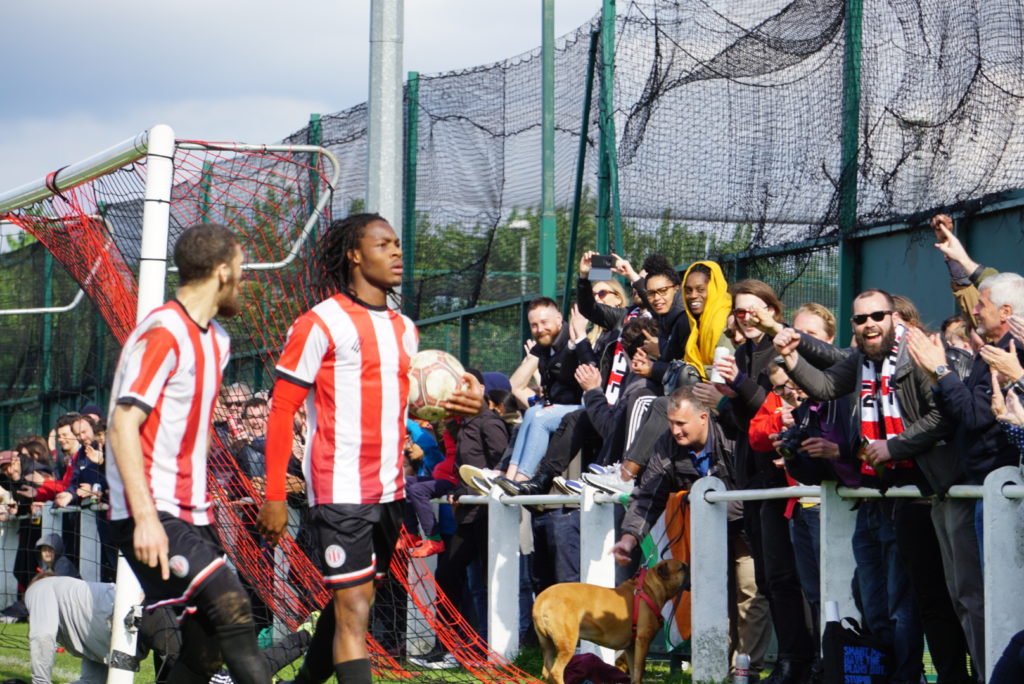 This also clinched promotion to the Middlesex Counties Premier League.

Next season there will be games with the likes of Pitshanger Dynamo, Indian Gymkhana and Larkspur Rovers. We don’t know exactly where they are yet, but we’ll enjoy finding out.

With Dean Bouho suspended after his red card in the Anagram Records Trophy final defeat to Catholic United, early season stalwart Jordan Odofin made a return at centre back, following a spell with Southern League side Cambridge City.

Having picked a strong team for this must-win match, Geoff Ocran just had to hope they could keep their nerves in check.

Here's our starting XI and subs for the title deciding game vs @fcroast1. Kick off 3pm. pic.twitter.com/Yqjewv2Fo8

Against a team in the lower reaches of the division, the Clapton fans were hoping for a less dramatic afternoon than the epic wins over The Curve and London Samurai that set up this title chance.
But having drawn 4-4 with this opposition on the same pitch earlier in the season, the Tons couldn’t take anything for granted.

The actual lineup hasn’t changed so much since that rainy October afternoon. But since then, they have become a real team.

And on Saturday it was Josh Adejokun who scored an early opener to ease some of the jitters. The Roast defence failed to deal with a long throw-in and the winger smashed in from close range.

Then, a classic bit of non-league comedy.

Stefan Nielsen tried to make inroads down the left, but was wiped out by a French bulldog called Pie that had darted on from the sidelines.

Applause from the Roast bench. Consternation from Stu Purcell. It wasn’t the cleanest tackle, but it has to be said that Nielsen went down a touch easily.

>But as Half Man Half Biscuit once sang, Even Men With Steel Hearts Love To See A Dog On The Pitch

>And what did the ref give for this dog fouling? A dropped ball. Contested and won by Clapton.

After 25 minutes (and having recovered from his canine collision) Nielsen made a spectacular effort on goal.

Lurking just outside the box, he caught a volley sweetly with the outside of his boot. It swerved at speed towards the bottom corner, but the alert Roast keeper tipped it round the post.

But a minute later, the Tons did make it two. A chaos-causing Sherwin Stanley long throw was headed on then lashed home at the second attempt by Adejokun.

Either side halftime, Roast threatened.

On 37 minutes, they came close to reducing the deficit. With Dan Anfossy in no man’s land, top scorer Bradley Barraclough tried an audacious overhead kick. It was heroically cleared off the line by Liam Smyth.

At the start of the second period Roast had a header just wide and Anfossy saved smartly from Max Tagliapietra‘s near-post effort.

Clapton knew they couldn’t give their opponents even a sniff of a comeback. Pie’s owner would be the only one to let a lead slip through their hands on the day.

Stick a fork in it

Adejokun had a chance for a third when he bustled through on goal. With the ball bobbling awkwardly, he hooked it wide of the post. No hat-trick. Yet.

On 72 minutes, the ball was sent wide to Stanley. Roast defenders surrounded the striker, had the ball flipped over their heads a couple of time and couldn’t get possession. Jake Stevens accepted a lay-off and fired in to Adejokun, who was standing unmarked in front of the Roast goalie. He side-footed a volley into the back of the net to make it 3-0.

That was the goal that unjangled all the nerves and banished all the jitters. It was party time in the stand and hugs all round in the Clapton dugout.

Towards the end of regulation time, sub Louis Rene went on a mazy run. He turned a couple of defenders inside out and snapped a low shot just past the post.

There was just time for late introduction Sham Darr to have a chance in front of goal. But he hesitated to pull the trigger and the danger was snuffed out. 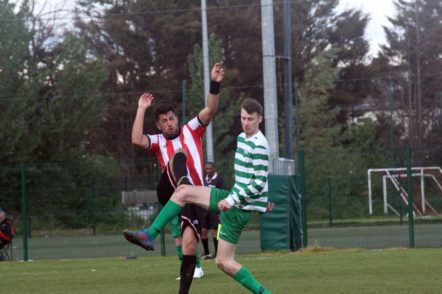 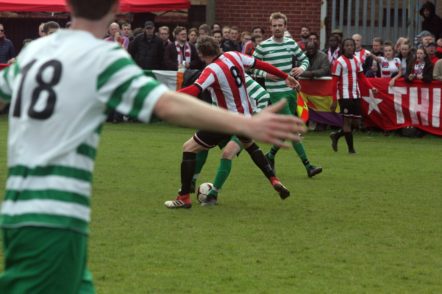 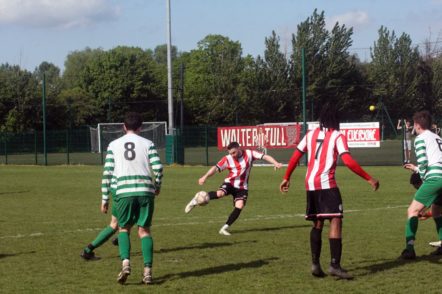 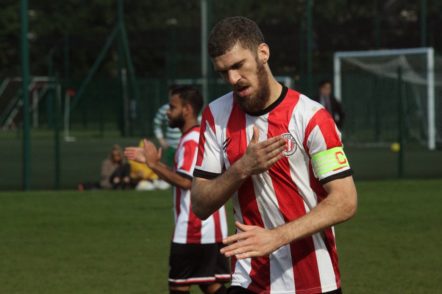 The season closer was far from a classic game.

>But it was exactly the professional performance needed to seal this momentous achievement. The campaign even finished with a rare clean sheet.

All that remained was the celebration. First, the usual sing-song. Then the players were held aloft one by one in front of the fans. Each took a symbolic sip of Tyskie.

Who needs #moet when you have #tyskie @ClaptonCFC (sacrilege to waste it though eh 😉 ) #champions #WeAreTheClapton pic.twitter.com/wTXb3lR38R

The league trophy wasn’t actually on site – it is always presented at the league’s AGM in June.

Luckily, Clapton had won the Jim Rogers Cup the previous month, so they brought that out so they could lift something more traditional than a can of Polish lager in front of the fans.

Not only did a Clapton side take the field in front of over a thousand fans for the first time in the modern era. They actually drew over a thousand more than the 256 who saw the reverse Roast clash.

So it wasn’t just the league title that Clapton snatched from Stonewall on Saturday, but also the league’s highest attendance. 1,054 had seen the Barnes-based side take on Wilberforce Wanderers in December. But that game was played at Wembley Stadium.

Still, these have to be two of the highest figures ever recorded in the 12th tier of English football.
Next season, there will also be trips to play the likes of PFC Victoria London, Sporting Hackney and Lampton Park.

Whether or not it can match this sensational first year, it is bound to be another wild ride.

We spoke to Charlie Fagan, Jake Stevens, Josh Adejokun, Dean Bouho and Phil Blakesley to look back at the championship winning season.

Hat-trick hero Adejokun rightly ran away with it.

Man of the match poll for Saturdays’s title-winning victory against @fcroast1.