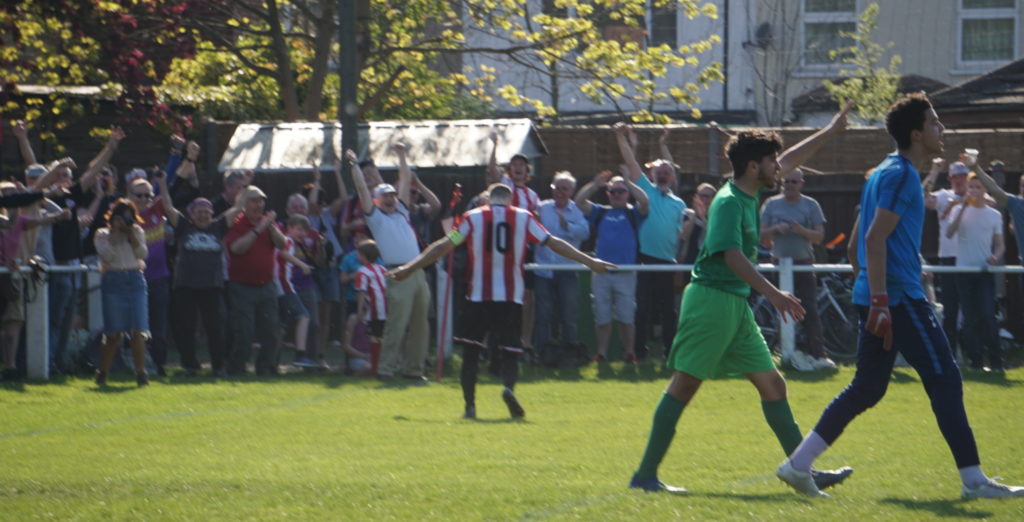 With every game, Clapton pull out a more improbable, more outrageous win. They keep one-upping themselves in the drama stakes.

As with their battling Jim Rogers Cup triumph over Hilltop FC the previous weekend, the Tons put in a mixed performance against The Curve.

The margins were fine. There was some bad, but there was just a touch more good. And in the end it was Geoff Ocran’s side that managed to claim the three points they needed to keep their title challenge alive for another week at least.

Ocran brought Jon Akaly into the attack, with Ellick Coleman continuing at left back. 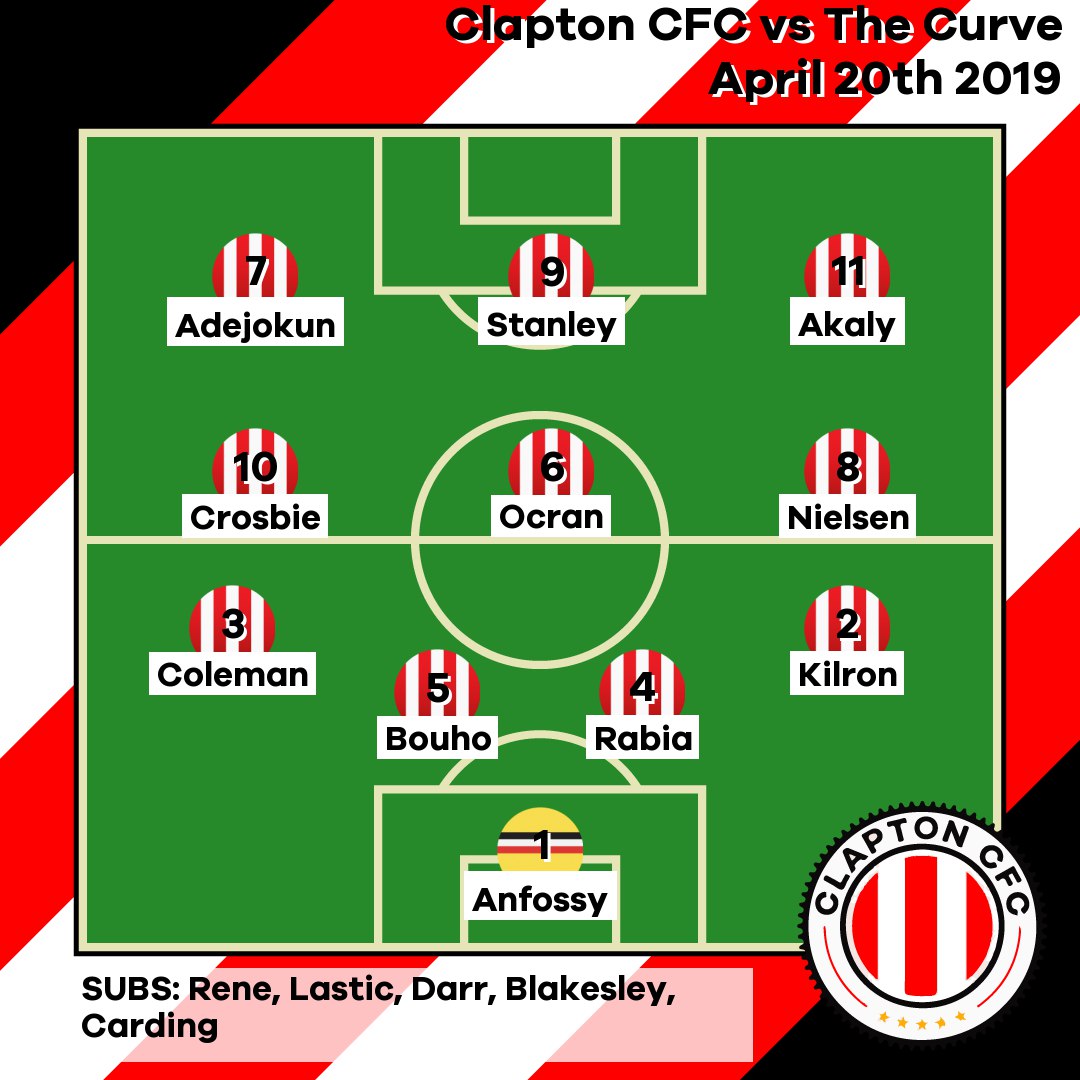 The Curve were without league top scorer Ahmed Mahfouz, who caused the Tons trouble in the reverse fixture.

The pattern of the first half was basically:

The away side’s attackers were making themselves at home in the space behind Clapton’s high back line.

After 10 minutes, Dean Bouho crunched the ball and attacker Ashraf Tougheni at almost the same time. The referee decided the man had been crunched first and gave a penalty. Mohammad Belamouadden disguised his run up well and rolled into the bottom right corner. Dan Anfossy rolled the other way.

A couple of minutes later, Josh Adejokun ran through on goal. He bumped defenders away from the ball and fired into the corner for 1-1.

Clapton then pulled off a quickfire turnaround. Eliot Crosbie nailed a bobbling ball into the bottom corner on the half volley. On the balance of play, it was an undeserved Clapton lead.

The visitors launched another terrifying break on goal. Anfossy saved with his legs, saved a rebound and then some defenders did some saving tackles to preserve the lead.

On 21 minutes, that lead went. Tougheni was played through again. When he received the ball, he was already miles away from the nearest Clapton defender. The gut reaction is to say ‘offside.’ But he probably just ran really fast from his side of the pitch.

With the whole of Clapton’s half to play with, Tougheni advanced to easily slot past Anfossy.

And the Curve went in front shortly afterwards. A free kick from the right was simply side-footed in.

Approaching half time, The Curve got a deserved fourth. Belamouadden had the ball in the box, but with a lot of bodies in the way. From an angle, he did a deft outside-of-the-right-boot dink that kissed the inside of the far post. Classy. 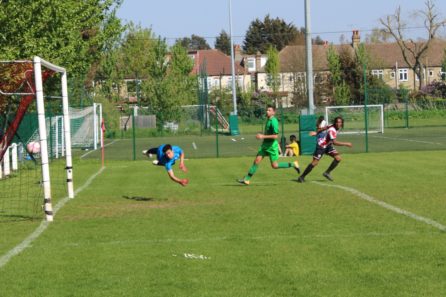 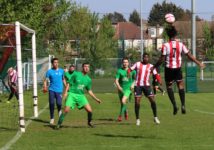 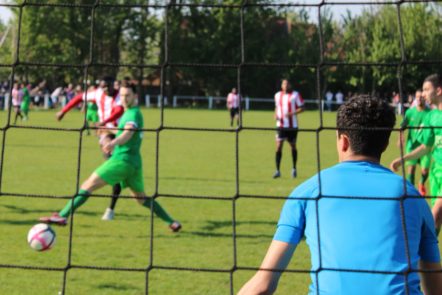 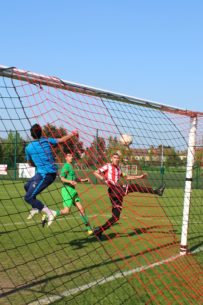 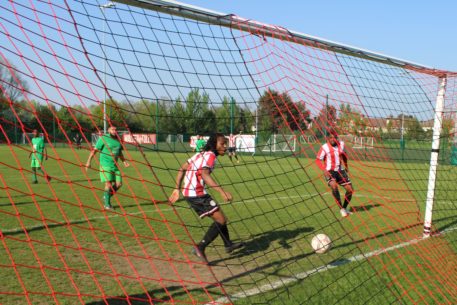 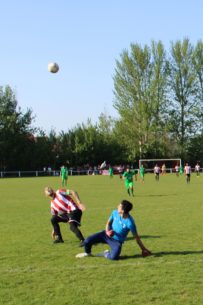 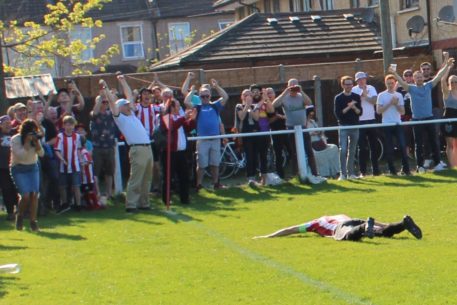 With Clapton clinging on for the break, Curve had another decent penalty claim waved away. This time it was Yacine Rabia doing the heavy duty tackling.

The Curve’s manager was heard bemoaning how many more goals they’d have got if their deadly star striker was on the pitch.

And that was it. Title dreams undone by these fast, tricky West Londoners. This was one unlikely comeback too far. Game over. Right?

The Tons immediately looked both more solid and more threatening at the start of the second period. Crosbie tested the keeper with a low shot and Sherwin Stanley fired into the side-netting. Andrew Lastic and Louis Rene came on to give the opposition different problems to deal with. 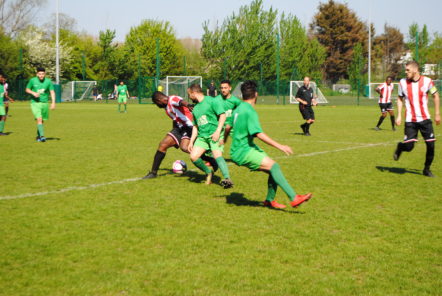 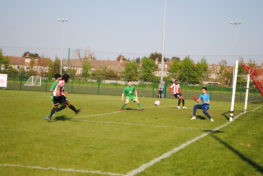 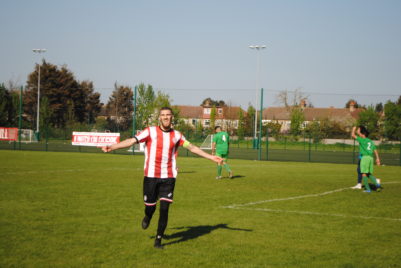 On 65 minutes, Adejokun was barged over in the box. The ref said no penalty. The player who barged him over went down injured for some reason. Adejokun held his head in hands for a solid minute, showing his level of disbelief in the whole situation.

Three minutes later, CCFC got one back. It was a slick takedown and turn and shot into the bottom corner by Stanley. 4-3.

Shortly afterwards The Curve had a player mysteriously red carded. It seemed to be for bad language towards the ref – who brandished the red card with Mike Dean-like levels of relish.

Some confused Clapton fans asked the departing player why we had been sent off:

“Because I’m gorgeous” – The Curve player explaining why he had been sent off, pointing at his face

As he had already been replaced, there was no advantage for the Tons. A quick headcount confirmed that there were still 11 Curve players out there. What is the point in that?

Then, an unbelievable equaliser. Adejokun rocketed onto a ball over the top and smacked it low into the far corner. We’ve seen this goal countless times this season. There is nothing the opposition can do to stop it.

But, Clapton weren’t about to make things easy for themselves. Bouho tussled with a striker in the box. Shirts may have been tugged. The referee pointed to the spot again.

Long-surnamed forward Belamouadden again sent Anfossy the wrong way with a calm stroke. 5-4. The Curve back in the lead.

But again the Tons fought back. Stanley unleashed one of his viciously swirling long throws into the six yard box. In a big melee, Rene tried to force it home. The keeper appeared to block it on the line. The ref pointed to the halfway line. Goal? Free kick to the Curve? How can you tell? It’s the same gesture.

But after some angry argy-bargy and a word with the lino, the equaliser was given.

Straight from the restart, The Curve’s Bilal Aalouache whizzed down the right and pulled a shot just wide of Anfossy’s post. 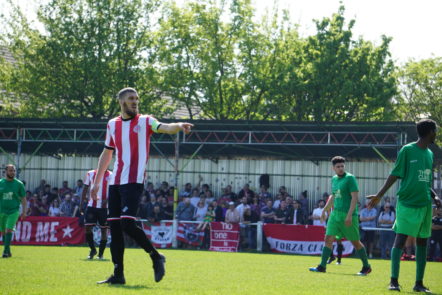 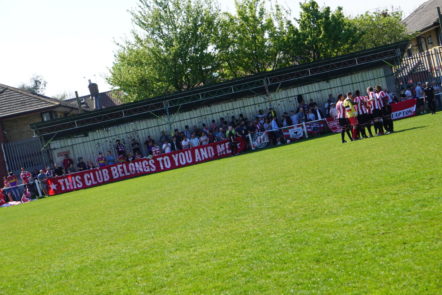 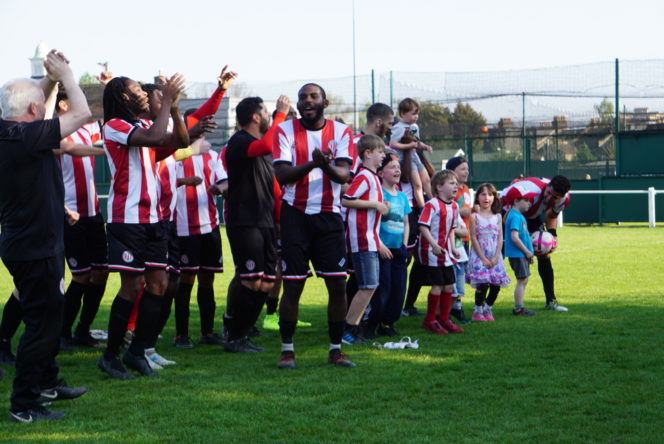 The Curve almost scored from a beautiful move. It started with an overhead bicycle kick clearance from defence. There was a nice backheel in the middle of the park. An attacker was bearing down on goal but Bouho came back to monster him off the ball in a crucial intervention.

By this point, it was mostly just chances. Crosbie stole though and managed to round the keeper, but went too wide to score himself. He cut back. Curve defenders snuffed it out.

Into the closing stages, a deadly free kick delivery from Stefan Nielsen was hooked back by Crosbie at the far post. It hit the inside of the post and dribbled straight along the goal line into the arms of a relieved keeper.

Cometh the hour cometh the Dan

Around the 90 minute mark, a dodgy Clapton pass released a Curve attacker down the wing. He drilled it across the middle. Two strikers were lining up to tuck it away. Anfossy made himself big to block the shot.

At 5-5, with both teams pressing for a winner, that was a valuable stop. And there was still time for an invaluable one.

Deep in injury time, Bilal Bihi danced through the Clapton defence. He tried to place it in the bottom right corner, but Anfossy slapped his glove down on top of the ball. Stopped it dead. Stood up and launched one upfield.

A headed flick on from Stanley and suddenly Crosbie found himself through on the keeper. He tried to slot in, but the Curve keeper blocked with his feet. The ball spun up in the air, but the Clapton man expertly brought it down to smash into the net.

Injury time. @ClaptonCFC drawing 5-5(!). Needing a win to keep title hopes (season?) alive. Defeat would cap off a resoundingly awful week off the pitch. It's unthinkable.

And then @MrAnfossy does that. And then @EliotCrosbie does THAT.

In the stand, beer and bodies flew.

Crosbie lay himself face down on the turf. His teammates collapsed on top of him in a relieved human puddle.

Clapton managed to shut down the remaining couple of nervy minutes to set up a massive clash with London Samurai next weekend. Those 21 seconds could yet define CCFC’s whole season.

In spite of the result, some of the Clapton players we asked about the game in the mix zone (the bit next to the merch stall) seemed traumatised:

Just imagine how the other guys must have felt.

We spoke to Phil Blakesley, Geoff Ocran, Sham Darr and Dan Anfossy after the heart-stopping win.

We’re here with Geoff, Sham, Phil and Dan after a heart-stopping 6-5 win

Eliot Crosbie bagged his second dramatic last-minute winner against The Curve this season and won our Twitter poll.

Man of the match vote vs The Curve