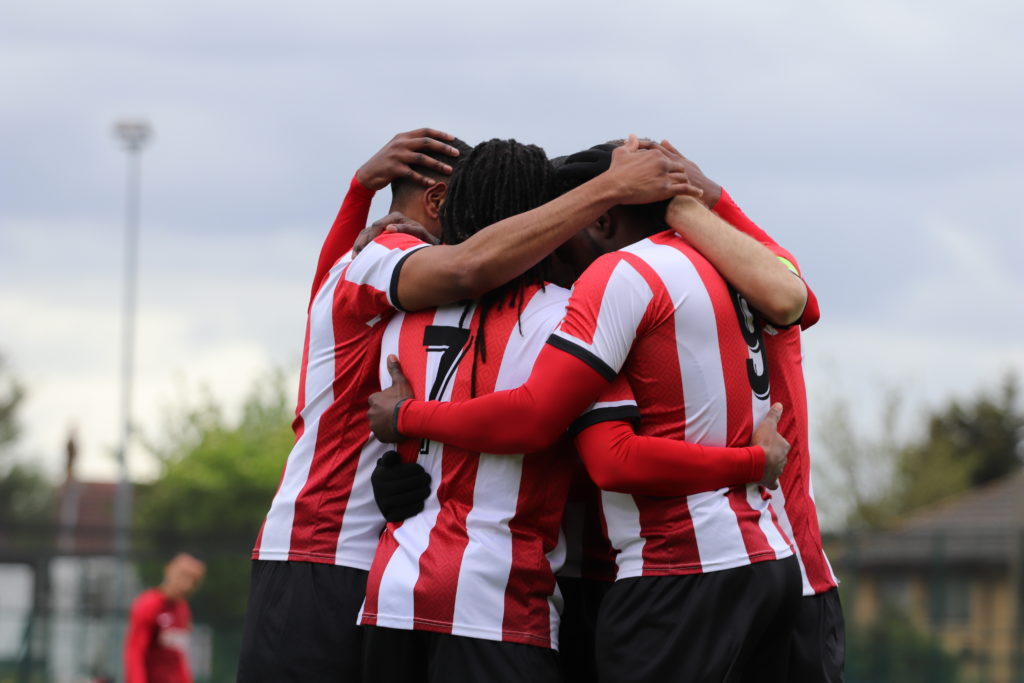 Clapton have won yet another game they had no right to win.

The previous weekend, 4-2 down at half time. Torn to shreds by The Curve’s pacy attackers. Roaring back in the second half to win 6-5.

This time, enduring an onslaught from some of the classiest players we’ve seen grace the Stray Dog. Holding out.

Now they are within touching distance of an unthinkable debut season title.

London Samurai, who had only lost one league game this season, really looked the business.

Mop-topped number 6 Wataru Tobe was orchestrating things in midfield. He repeatedly fired diagonal balls to send number 15 Koshi Takeuchi through on the right. Tons left back Alby Miller needed to be at the top of his game.

The first chance came as Takeuchi latched onto a punt straight from the keeper and lobbed Dan Anfossy, but was flagged offside.

On 12 minutes, an innocuous ball by Cemal Agdelen over the top. The Samurai keeper rushed out. The centre back rushed back. They both left it to the other. Sherwin Stanley snuck in between to tickle it past the stranded goalie into the net.

It was all Samurai. But Clapton’s desperate defending was keeping them at bay. Josh Adejokun‘s pace was providing an occasional outlet.

Then on 37 minutes, Stanley had a great chance to double the home advantage. He burst through between the centre backs. Bearing down on the keeper, he tried to slide it into the bottom corner, but it slipped just to the right of the post.

Takeuchi had a close range chance that he prodded straight at Anfossy. Stanley had a headed chance that their goalie managed to smother.

Into first half stoppage time, Dean Bouho wiped out Takeuchi in the six yard box. No penalty. A lot of pain for the Samurai man as he eventually hobbled back to his feet.

In the dying breath of the opening 45, Samurai got a deserved equaliser.

Bouho took the sting out of a Samurai through ball with his head. But in the swirling wind, it dropped awkwardly just below Anfossy’s crossbar. He could only knock it straight up in the air. It fell for an easy tap in. Goal: Tobe. Assist: Storm Hannah.

The ref peeped his whistle literally one second after the restart.

It was a big psychological blow for the East Londoners, having held on so well since taking the lead. But the break offered a chance to regroup and refocus on the task at hand.

Clapton sprung out of the traps in the second half. Stanley made a foray to the byline. He drilled it across the six yard box, where Louis Rene was waiting to tap home. 2-1 Tons.

The Samurai captain, centre back Cameron Gilmartin, turned to the Clapton support to give it all that.

A couple of minutes later, the Tons edged back in front. Stanley is as good at throwing as he is at shooting, heading and casting defenders aside. He launched a spinning wind-backed throw-in towards the box. Rene rose to head into the top corner.

Did you enjoy that Gilmartin? Huh? 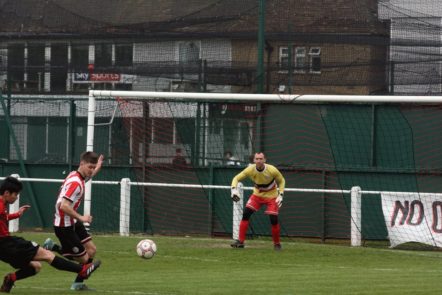 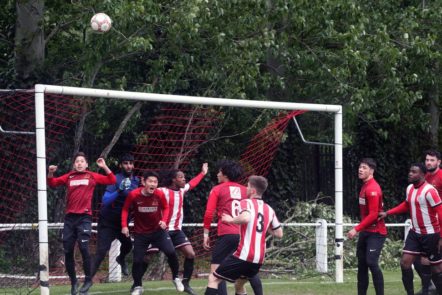 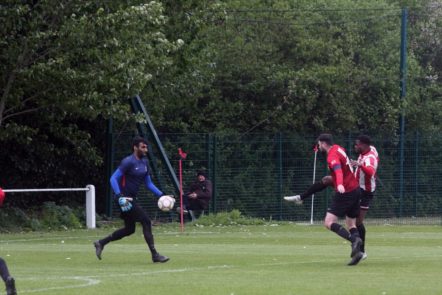 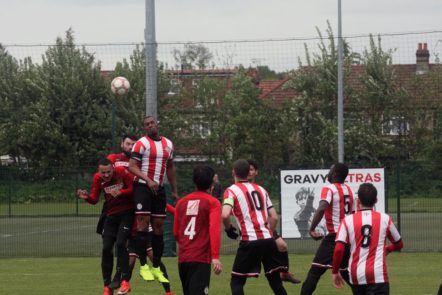 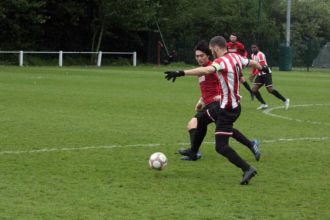 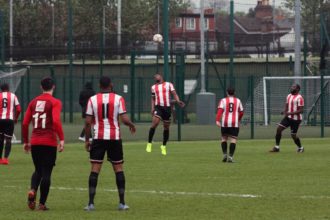 Backs to the wall

After the trademark goal flurry, Clapton still had ages to keep their impressive opposition at bay.

But all-action defender Bouho was powering himself up to maximum Deano-levels. A nuclear tackle here. A last-ditch goal-line clearance there. The Samurai forwards were not enjoying his efforts at all.

In his own understated manner, Ocran was doing some invaluable breaking-up-the-play in the middle of the park.

As the clock ticked down with cruel slowness, Samurai ratcheted up the pressure. The chances came thick and fast. A couple of one-on-ones were dragged round the post. Anfossy made an excellent save from a bottom corner-bound header.

It had seemed impossible for Clapton to hold on. But they held on. This was arguably CCFC’s greatest triumph to date. 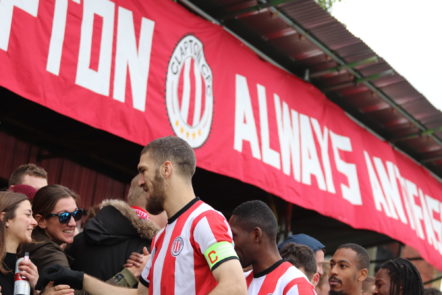 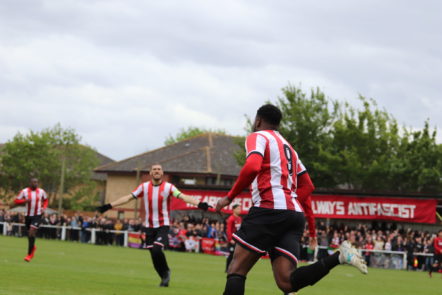 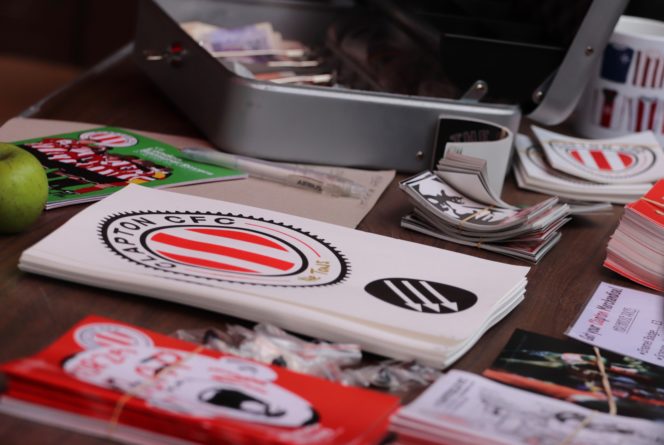 Do we go again? Yes we do

It was a cruel end to the season for Samurai. They are skilful and organised enough to play at a higher level. They have amassed by far the most points. But their admin issue that cost them 15 points has cost them dearly.

As the full time euphoria subsided, fans milled about in the stand waiting for news to come through from Ive Farm. If Eastfield had beaten Stonewall, the Tons would already be champions. But the league leaders had scraped a 2-1 win.

All eyes on The Stray Dog on the 11th of May, when Clapton take on FC Roast in an ‘away’ game that has been switched to Walthamstow to accommodate the expected crowd.

Three points and the Tons will have reached the promised land of the Middlesex Counties Premier Division.

The thoughts of the coaching staff (Geoff Ocran and Sham Darr) and players (Dean Bouho and Louis Rene) in the dressing room after the game.