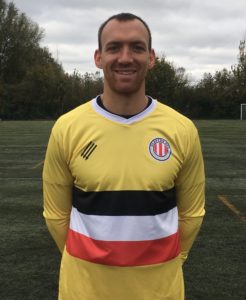 Full Name: Daniel Anfossy
Place of Birth: London
Place where you live: Clapton
Day job: Maths teacher
Favourite player: David Seaman
Favourite team, apart from Clapton CFC: Arsenal
Most memorable match played in: Salisbury City vs Enfield FC in the FA Trophy 3rd round in front of 2000 fans
Favourite ground played at: Highbury
Biggest high in football: Winning the English schools FA Cup
Lowest point in football: Losing in the final of the National Conference U19 Youth League while playing for Loughborough University
Likes and hobbies: Cycling, travelling, gigs, eating out
Dislikes: British winter, cleaning, mustard
Favourite charity: St Joseph’s Hospice in Hackney – the care they provided my best friend’s mum with her battle with cancer was invaluable
Favourite country visited: Brazil
Favourite food: Italian food – pizza and pasta
Favourite music/performers: Hip hop
Favourite TV shows: Game of Thrones
Favourite film: American History X
What you love about football: The buzz you get when we score or making a crucial save
What you hate about football: The shift in teams operating as businesses rather than sports clubs
Biggest influence on you: My mum and my girlfriend, Phoebe
Footballing ambition: I’ve only got a few years left in me but it would be nice to see Clapton CFC get back to where they belong, in the ESL (or beyond!)
Who you would most like to meet: Nelson Mandela