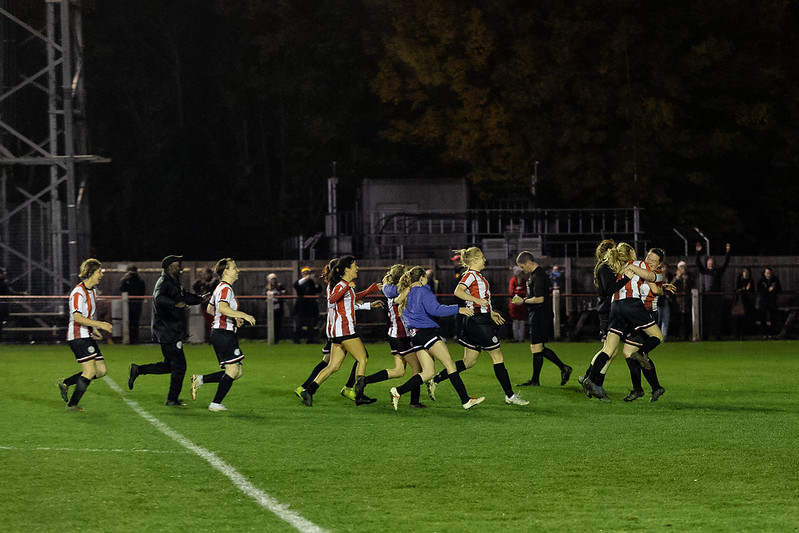 Those who made the trip to Bedford for Sunday’s Women’s FA Cup clash were lucky enough to witness one of the all time great moments – and performances – in the club’s history. Not just the fan-owned era. The club. The one that’s been doing it since 1878.

Having ejected higher league opposition in the previous two rounds, it seemed an off chance that the Tons would continue the run. But what transpired proved that the defeats of Haringey Borough and Biggleswade were no flukes. CCFC are a quality side that could do damage if they were dropped in couple of tiers up.

Worth mentioning: each of these games against higher up teams has been away from home. It needs to be stressed that this time, due to issues tying down a local pitch, the Tons GAVE AWAY the home advantage. And Bedford even drummed up a healthy support – featuring a very vocal and partisan contingent from their youth teams.

Claudio Gomes was able to name an unchanged eleven from the 4-2 defeat of Regents Park Rangers that kept the Tons top of the GLWFL Premier.

Clapton took it straight to their hosts and scored from their first attack. Emily Link raced onto a throughball and the Bedford keeper raced out rashly. Link’s shot hit the base of the post and Marta Boiro reacted quickest to tuck away.

On 10 minutes, Polly Adams tipped a long range Bedford effort onto the bar. It was the first of many top saves.

Then Boiro whipped a trademark corner. It went all the way across the face of goal without a touch and out the other side.

On 19, Bedford fired in a cross from the right that Adams did brilliantly to knock away from any lurking foreheads.

The Tons back four of Mim Chadwick, Annie Lyons, Alice Nutman and Kiki Marino were calmly dealing with most threats before they got that close.

In addition to some incredible work in defence, left back Chadwick had a good chance at the other end. After a Clapton corner she found a touch of space in the box, but pulled her low shot just past the post.

Just after the half hour mark, there was a let off for Clapton. A Bedford forward bore down on goal, but scooped over the bar.

Sadly, the Tons could not take their advantage in at the break. Bedford’s number 7 broke into the box and slotted past Adams.

Knee slide. Cupped ears to the crowd. She must have wanted to hear more tunes.

Defiantly, the away fans cranked the volume on We Are The Clapton, serenading the teams as they headed up the tunnel.

In the second half, Clapton grew further in confidence. They were containing Bedford fairly comfortably. In the middle of the park, it was as if Boiro was playing in felt slippers with a string of delicate turns and passes. Link and Lucy Spours were holding the ball up well, feeding Maria Mendonca and Marta Casanovas to menace the Bedford fullbacks.

Boiro drifted a free kick just past the post.

On 65, a Bedford player made a dangerous challenge on Link. It fell to Mendonca some 35 yards out, surrounded by defenders, and the referee played advantage. Without any support (Link down in pain) the winger did brilliantly to carry the ball forward. She skipped a couple of challenges and managed to fire off a shot, which the keeper parried to safety.

Shortly afterwards, Casanovas picked up on the right and angled a perfect throughball for Link. The striker could not quite find the corner with her shot and again the Bedford number 1 beat away.

On 72, Adams made another top stop from a point blank header from a corner.

Bedford’s number 7, who in fairness has the ability to back up the cockiness, continued to be at the heart of everything dangerous they did. She crossed from the left only for her teammate to skew past the post.

This was developing into a high-octane, end-to-end-to-end thriller. What they call a PROPER cup tie. And as a spectacle, there is little better.

Daylight turned into floodlight, setting a fitting backdrop for a dramatic finale.

As both sides tired from the non-stop nature of the tie, Gomes brought on Camila Marcolino for Casanovas then Ana Holmes for Boiro. This gave the visitors energetic new outlets on the wings and pinned Bedford back, just at the right time.

Into the first half of extra time, Clapton seemed to be going for the jugular. They were not holding out for penalties by any means.

Of course nor were the home side, although they had come through the previous round this way.

Adams plucked one long-shot out of the air.

Chadwick made a sensational challenge, got up and played an equally sensational ball down the left. Link seemed to be fouled in the box, but the referee was quick to wave away. Still, the ball broke to Steiner, who hooked just past the post.

Into the second half of extra time, Li Steiner did what she did brilliantly all game (and all Clapton career) and broke up an opposition move. She fed Link, who shot just over the bar. They must have been running on fumes, but you would not have been able to tell. The 11 in red and white were still charging around like it was the first minute.

Marcolino broke free on the left and had an effort on goal. Again saved.

Straight up the other end and the Bedford 7 (yes, her again) was one on one with Lyons. The Clapton centre back was even more impressive on this occasion and made a crucial challenge. The stakes were high. Lyons calm as you like.

Marcolino, then Gomes gestured for the Clapton support to get louder as they passed. Somehow, they did.

Approaching the end of extra time, a massive moment. Lenny Holmes, on for Mendonca, darted down the right and found herself one on one with the keeper. She dinked it past and seemed to have been taken down. Surely a spot kick! The referee consulted with the assistant and decided was not a penalty. He gave a drop ball.

This referee loved nothing more than a drop ball. There were almost as many as there were throw ins.

There is an interesting backstory with the assistant. She played in goals for Enfield against Clapton, even proudly sharing pictures of her saves in that game in the bar after the game. Sadly unable to continue playing due to injury, she is now trying to become a referee. Then that part in a big decision against us…

It would have been easy for the underdogs to have been disheartened by losing that big late chance.

Their opposition were not just two divisions above but on a nine game unbeaten streak as well. Just matching them over the 120 minutes was an incredible achievement. But there was a little more work to be done…

Penalties are not a lottery as they are sometimes unfairly described. They are the ultimate test of nerve. Cruel way to decide a game of football in a way. But in other ways, the best!

The hosts buried their first two, with Marcolino converting for the Tons. Then Link hit her effort off the inside of the post…and it agonisingly bounced out. Millimetres away, but advantage Bedford.

Their next effort was fairly central and Adams parried away. 2-2 after three penalties each.

Lyons was next to make the long walk from the centre circle and fired in to the keeper’s left. The hosts ballooned their next one over the bar and the momentum seemed to have swung decisively in Clapton’s favour. Spours stepped up next and although she did not make a great contact, the Bedford keeper had a bit of a nightmare and it slipped in. Tons on the brink.

Bedford had to score to keep themselves in the contest. They did. And the stage was set for Clapton captain Nutman to seal the glory.

She absolutely thrashed it to the helpless goalie’s right. 4-3 to the Tons! Nutman turned to see a wave of red and white teammates rushing towards her…and braced for impact!

Flashback to the development team’s game on Clapham Common the day before. Nutman was there, wearing a coat and nice boots, placing the ball in the exact same spot throughout the halftime break. She had been practicing it all week. We had nothing to worry about all along!

The Tons have been drawn away to Hounslow in the second round. The West Londoners play in the third tier, but will be low on confidence on account of getting destroyed every week, albeit by some very good rivals. They are on zero points from eight games, with a goal difference of minus 37. Can momentum and confidence bridge the gap? We will find out on November 28.

With this Clapton side, you cannot rule out further miracles.