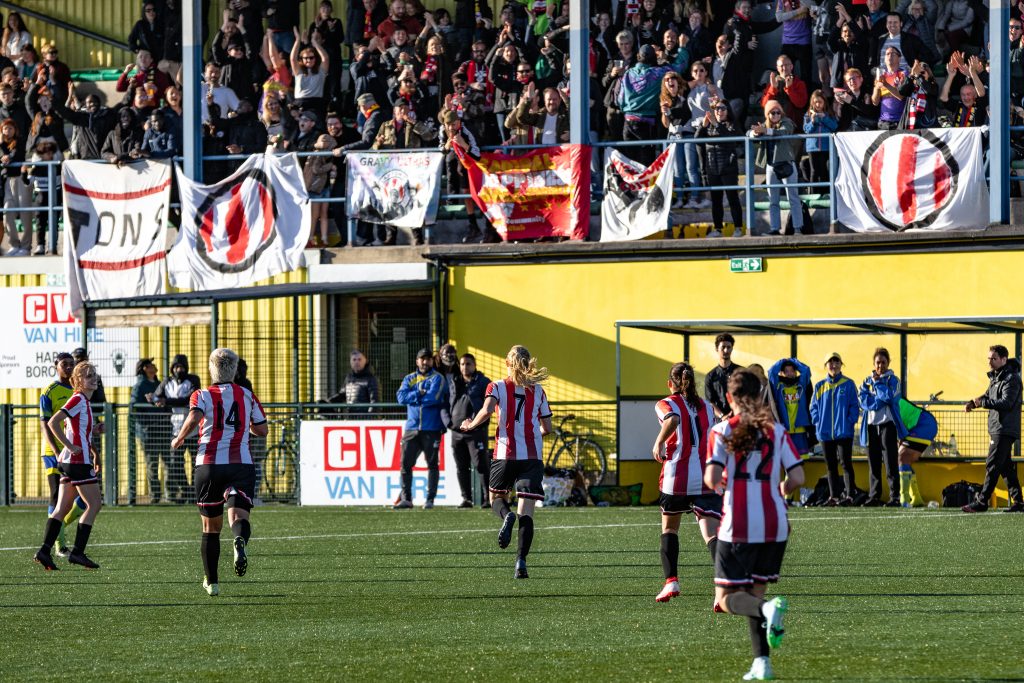 Our women’s first team has started the 2021/2022 season strongly. Last Sunday they recorded the biggest Clapton win in history, and it was clear from before the game had even started that they were exuding confidence.

Coach Gomes made only one change in the starting lineup from the game against Enfield Town Thirds, with Verity Phillips slotting back in at right back.

Haringey Borough started brightly, but it wasn’t long until Tons made their mark on the game.

Less than 10 minutes in, Annie Lyons scored a header from a Marta Boiro corner. After that opening, it was all Tons. 32 minutes in, Marta Casanovas came flying down the right wing. After passing several Boro players, she found Emily Link in perfect position to curl the ball over the Boro ‘keeper’s head and put CCFC 2-0 up.

Just five minutes later Link secured her brace when she slid in to finish from a perfect Maria Mendonca cross. Two minutes after that, Boiro scored an unbelievable free-kick from 25 yards out. At 4-0 up after 40 minutes, the Tons looked unplayable.

However, it wasn’t long before Haringey got their own back, as a shot was deflected and sailed over Polly Adams. The first half finished Boro 1, Tons 4.

Boro came out a different team in the second half, and pushed down CCFC deep. With an unstoppable long-range finish in the 57th minute their chase was truly on. Not long after they were awarded another chance, but Adams was not to be beaten.

The Tons managed to push forward again, and Boiro secured her brace for the day as she headed in a Link cross.

The game still had more in it though. Adams was called into action on several occasions, as Boro tried to close the gap. 81 minutes in, their persistence was rewarded, as they headed in another long-range shot.

CCFC had one more in them yet. Substitute Annie Bartkowski sent the ball forward, to be picked up by Link. By remarkable talent and graft, she passed several defenders and finally saw the ball hit the back of the net to clinch her hat-trick of the day.

When the final whistle blew the scoreline said 3-6 and the cupset was a fact.

Clapton CFC have now been drawn to face Biggleswade United away in the Third Round Qualifying on 24 October.

The Outside Left match report