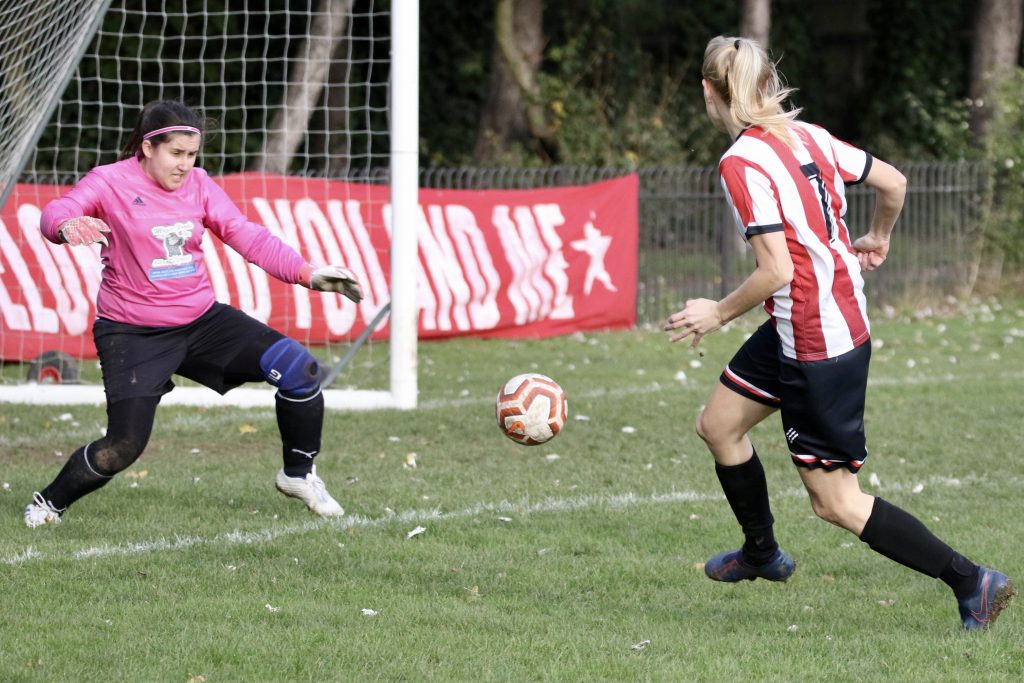 Clapton were back on the third grass pitch at Wadham Lodge (that’s known variously as The Lost Dog, The Park Pitch, The Secret Garden, or the LRT Sports Ground) for a match against Regents Park Rangers.

Coach Claudio Gomes was able to name a strong 16-player squad with a bench that most teams would add quality to most teams starting XI’s.

Skipper Alice Nutman returned to the centre of defence alongside the indomitable Annie Lyons. Kiki Marino was at right back with Mim Chadwick getting the nod on the left.

The midfield had a more familiar look about it with Lucy Spours returning to the fold alongside Li Steiner and Marta Boiro.

Up front, Emily Link was accompanied by Maria Mendonca on the left flank and Marta Casanovas on the right. A special mention too for Polly Adams who was in goal despite feeling unwell.

It took about 90 seconds for Clapton to take the lead. The opener coming from who else but Emily Link! Link broke down the left-hand channel and coolly slotted home past the Regents Park Rangers ‘keeper with the ball nestling satisfyingly in the far corner of the net. Had we scored too early or was this a sign of things to come?

The Tons were certainly keen to impress. On 14 minutes a beautifully weighted pass from Lucy Spours split the visitors defence allowing Marta Casanovas to go clean through. A the faintest of shimmies wrong-footed the ‘keeper and Casanovas was able to walk the ball into the empty net.

To Clapton fans keeping an eye on this fixture via social media, this might’ve started to look like a walk in the park. It wasn’t. Whilst Clapton – and Lucy Spours in particular – always looked to have a defence splitting pass in them, the visitors had a lot of possession in the middle of the park.

On 27 minutes, that possession translated into a dangerous attempt on goal which was spectacularly tipped round the post by Polly Adams who leapt to her right – a brilliant fingertip save.

However, just five minutes later, the Tons added to their lead. Marta Boiro had already had one go at curling a dangerous corner under the cross bar. Her second attempt was clawed out by the Regents Park keeper, but all she could do was divert the ball into the path of Annie Lyons who bundled the ball home from close range.

Again, to the casual observer, it looked like the game had been put to bed. The visitors had other ideas. On 37 minutes they were awarded a penalty and the Regents Park penalty taker sent Adams the wrong way. 3-1 and game on.

At the interval Claudio Gomes made three changes. He brought Lenny Holmes, Verity Phillips and Ana Holmes on for Marino, Chadwick and Boiro respectively. Camila Marcolino had also been swapped in for Marta Casanovas just before the break. With the Tons relatively comfortable it made sense to give everyone in the squad some game time ahead of next weekend’s historic FA Cup tie against Bedford Ladies.

With the visitors also making changes, some of the intensity seemed to have dropped out of proceedings. However, Clapton were still creating chances at will on the flanks. It was just the final ball into the area that prevented them adding to their tally.

Clapton’s fourth came from another of these chances – an Emily Link sortie down the right flank. She pulled the ball back from the by-line and Camila Marcolino did brilliantly to take the pace off the cross and fire home from close range.

Done and dusted now, surely? Regents Park didn’t think so. They never gave up and were rewarded with a second goal when a fierce shot was blocked by Polly Adams but fell at the feet of an opposing striker who buried this rebound. It was almost game on – again. However, the clock was running down and, to be honest, the visitors didn’t really look like clawing two more goals back to snatch an unlikely draw.

It was a case of mission accomplished for the Tons. Three more points and the entire matchday squad getting some minutes in their legs before next week’s trip to Bedfordshire.

A good day at the office (or in the park).