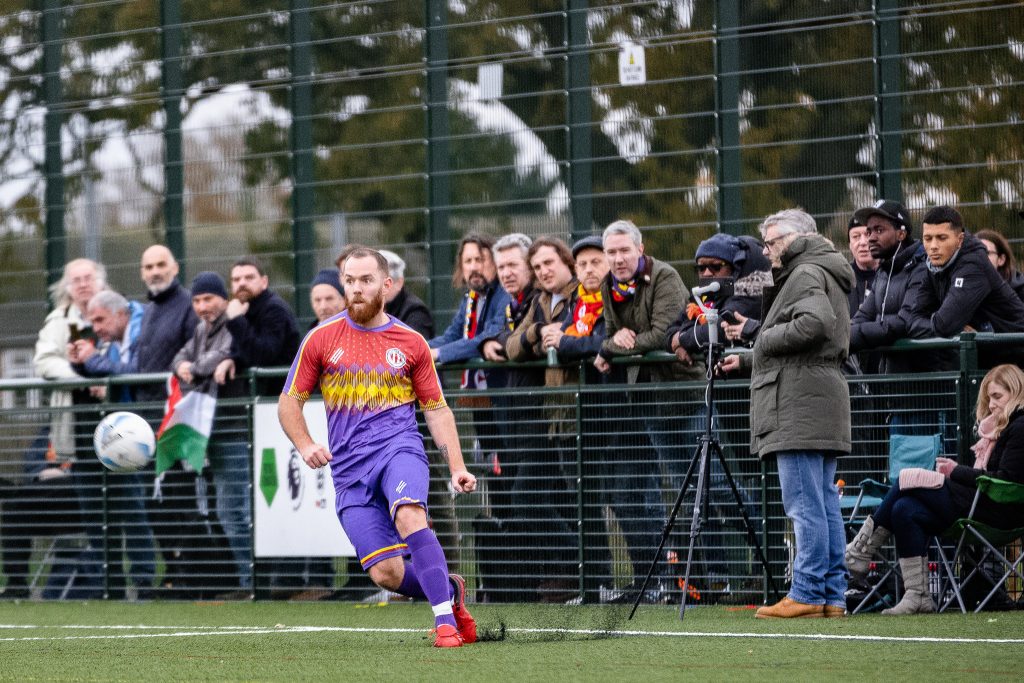 The Clapton CFC men’s first team travelled to FC Soma on Saturday for an eagerly awaited top of the table clash.

Newly promoted FC Soma caused something of a shock when they deservedly won 4-2 at the Wadham Lodge 3G in their first game at this level, and a win would see them leapfrog Clapton and go top.

Arriving at Bannister Leisure Centre, some Tons fans were unhappy to be charged to stand in an uncovered 3G cage, although this wasn’t the decision of FC Soma but the site owners.

Indeed the home side had rolled out the welcome mat including home-made sandwiches, cakes and hot drinks on sale, and issuing their first ever programme.

A fairly cagey opening saw both sides try and work each other out, before Arthur Wright opened the scoring for the Tons. His shot took a wicked deflection, looping over the hapless keeper.

Some more good chances for Clapton followed, however going behind seemed to wake Soma up, and just before half time another deflected shot left Jack Francis wrong footed and sent the teams in level at the break.

The second half saw Soma pick up where they had left off in the first, and a second goal soon followed. A low shot from the edge of the box sparking wild celebrations.

The game then ebbed back and forth, with both sides enjoying spells on top but neither being able to score, a goal-saving challenge from Jordon Odofin stopping Soma from increasing their lead.

Unfortunately the centre-back was carried off to add to a long list of injured players.

A frantic end to the game saw Clapton press for an equaliser and a precious point.

Fred Taylor and Lewis Owiredu went close, Francis saw himself called into action as an emergency midfielder to pump a ball back into the box, but the Soma defence held firm, sparking wild celebrations at the end.

A disappointing defeat for the Tons, as Soma completed a league double over us, marking them out as serious title contenders for Clapton to aim for.