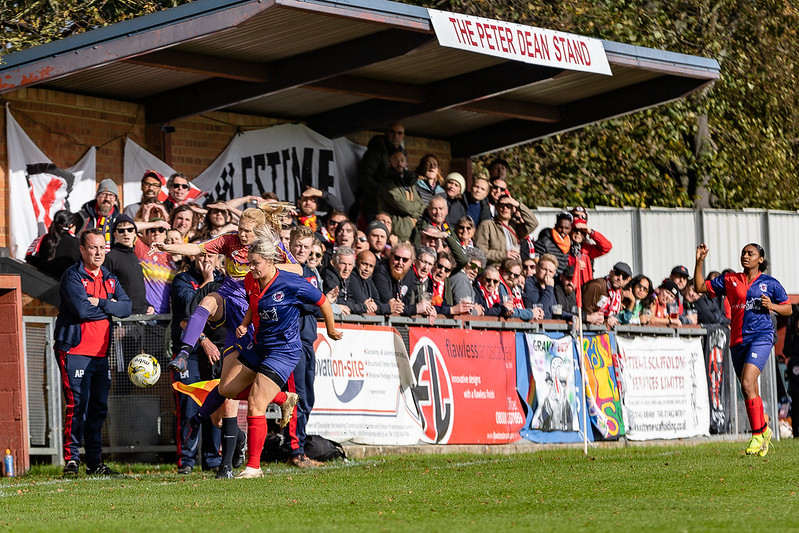 After beating Haringey Borough in the previous round, excitement levels were riding high ahead of Sunday’s FA Cup tie. A bright autumnal Sunday had many Tons wishing they’d not left their sunglasses at home.

The travelling support of over 150 Clapton CFC fans had caught the hourly trains up to Biggleswade station and formed a mini corteo to the prematch pub, with Clapton songs and drummers echoing down the high street. (We were jovially asked by pub regular Dave not to head back after the match as he would be having his Sunday dinner, fair enough Dave.)

The home side had predicted a 2-0 win in their match programme, which was allegedly pinned to the Tons dressing room wall as motivation.

The Tons victory over Haringey, who are higher placed than both teams, lent to the feeling another cupset could be on the cards.

Biggleswade however had not read the script. They started brightly and were very comfortable passing the ball around and showing their quality in a battling first half.

The Tons struggled to get any space or time on the ball, and the early standout players were Biggleswade’s composed left-back and pacey left-winger.  The winger’s play, in particular, was getting some appreciation from the Clapton fans, with at least one enquiring if she lived anywhere near East London.

Though Biggleswade saw more of the ball, they couldn’t deliver into the final third to create a solid chance.
Li Steiner and Lucy Spours began to click together and dominate the midfield. Anything that did escape them was squeezed out by Clapton’s centre backs. A searching cross into the Clapton box couldn’t find an attacker, a through ball was cut out by Annie Lyons.

The best chance of the half came at the 30-minute mark, a Biggleswade striker found herself in possession on the edge of the box and let off a low shot to the left of Polly Adams, forcing a diving block, the loose ball was pounced on by another Biggleswade attacker, but again Polly was there to clear for a corner. Still 0-0.

At the other end, Clapton were trying to hit the home side on the counter, though our promising breaks forward were halted either by solid defending or the linesman’s flag.

It was a half played mostly in the middle of the park, with Steiner and Spours putting in huge shifts to stop Biggleswade finding any rhythm. Harrying, tackling and moving the ball out to the Clapton wingers, the pair had an impressive half.

Though the Biggleswade side did advance up the pitch during the final five-minute spell, as the whistle blew, Clapton were buoyed to have held the higher-placed team goalless and more or less chanceless.

Biggleswade were left wondering how they could crack this Clapton team in the second 45.

No Rest for Biggles

The second half had a lively start with a raft of chances at both ends, a Biggleswade shot was blocked, a rapid Clapton counter was mopped up, a Biggleswade effort sailed just over the bar.

At the hour mark, the deadlock was broken.  A spell of short passes down the left side resulted in a high looping cross into the 6-yard area.

The keeper came to collect but spilt the ball to the penalty spot, where Emily Link was waiting. Link dinked a first-time lob over the keeper, over two watching defenders and into the goal, then made a beeline to the Tons fans who were going absolutely wild to be once again ahead in the FA cup.

“Very good limbs in the away end, I must say” noted the Biggleswade commentator.

Biggleswade persisted though, and shortly after the restart, another through-ball forced yet another key block from Lyons – corner.

The ball was fired in at pace, cleared by Clapton but deflected skywards, then dropped back down into the Clapton net… until Spours somehow teleported underneath it and cleared!

The resulting corner led to some pinball in the box which ultimately came to nothing. Spours’ clearance was a critical moment in the game and probably the save of the match, watching Tons could breathe once more.

The goal and our defensive solidity meant Clapton grew into the game and chances started coming. The tenacious defending of Kiki Marino and Alice Nutman in front of the assured Adams really gave a feeling that we could take something.

Minutes after Clapton’s first, Link threaded a pass through to Maria Mendonca in the box, who fired off a shot the Biggleswade keeper only just tipped over the bar.

Marta Boiro had a quiet first half but was now escaping the attentions of the Biggleswade midfield and able to create some space for herself. She drove toward the home penalty box, turned a defender inside out and fired just over the bar. Close, but she would get even closer.

After a Biggleswade attack came to nothing, Lyons kicked the ball upfield. It was headed on by the ever-present Steiner and Biggleswade could not get a decent foot on the bouncing ball which fell to Boiro, 35-40 yards out.
She was shaping up for a first-time shot, not from there surely! Boiro cannoned the ball over the disbelieving keeper, but it smashed against the inside of the crossbar and just stayed out. (or did it – video replay posted after the game looked very, very close indeed).

After two long-range efforts, Boiro eventually got her goal from a goal-line scramble. With five minutes left of normal time, a Clapton corner yet again unpicked the Biggleswade defence. One defender failed to clear, another picked up the ball on the line only to have their pocket picked by Boiro who stabbed home from four yards. 2-0.

Despite a comfortable lead, Clapton didn’t let up on their pressing game, with Steiner pouncing on Biggleswade right from the restart. There was great desire shown across the team, Mendonca, Spours and Steiner to name just a few were snatching the ball away with perfectly time tackles as the clock ran down.

The bench sprinted onto the field at the final whistle to celebrate a composed win against a very good Biggleswade side, who will have been frustrated they weren’t able to get going.

The game was played in a good spirit and Biggleswade were both gracious in defeat and welcoming as hosts. Not every club knows quite what to make of the travelling Ton support, but we were made to feel very welcome at the Second Meadow, thanks to Tracey James and all the volunteers, good luck with the rest of the season.

It was a difficult POTM poll after so many strong performances across the team, but in the end, our own midfield velociraptor Li Steiner took the day.

Our friends at Tons History were on hand to mark the significance of the win for CCFC:

Our next FA cup game is at home at the Stray Dog on November 14th, against Bedford Ladies FC.
Clear your diaries, cancel your plans, this is shaping up to be an unmissable tie.