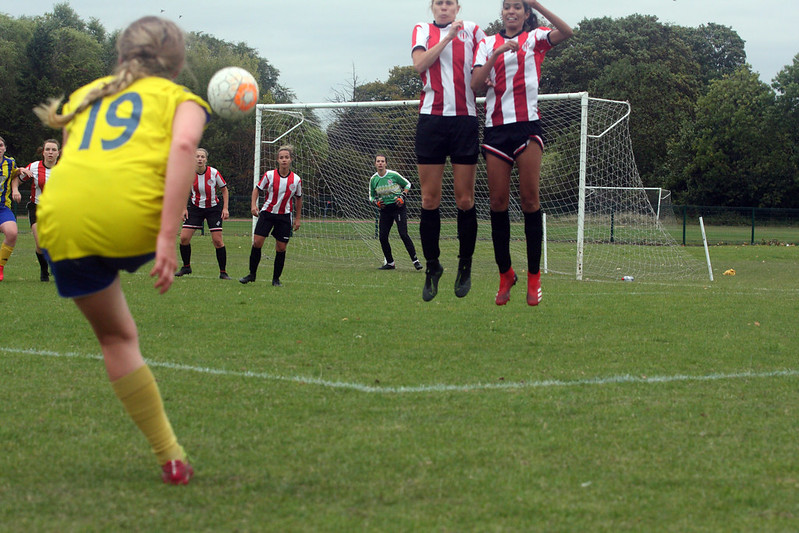 Another week, another big win for CCFC’s women’s first team.

Only three games into the season, they have found their groove. After last weekend’s 4-0 Palace victory, they brushed aside Regent’s Park Rangers in Barnes on Sunday. The narrow opening day defeat to Dulwich Reserves consigned to memory.

Claudio Gomes selected another familiar side. Mim Chadwick coming in for Alice Williams at right back was the only change.

The home side had the first real chance. Polly Adams had to parry a well-struck long shot round the post.

However on just eight minutes, Clapton took the lead. Emily Link took the ball in from the left. With the defenders unable to get close enough to put in a tackle, she pinged into the bottom corner from the edge of the box.

Just after that, Link made another foray into the box. Brought down. Penalty.

The striker made no mistake from the spot to put the Tons two up after just ten minutes.

Lucy Spours then had a decent chance to add another. The Regents Park keeper rushed out to block Larissa Vieira cutting in from the wing. It broke to Spours, who couldn’t quite guide into the exposed corner of the net from the edge of the box.

Li Steiner was also impressive in midfield, battling for every ball and stopping the opposition from getting anything going.

Just before the half hour mark, the Tons got a deserved third. A Vieira corner caused chaos in the home box. Eventually, in the midst of the melee, Maria Mendonca managed to prod over the line.

Neither side managed to get much of a sniff of goal for most of the second half.

Centre back pairing Annie Lyons and Phoebe Parthews were not letting anything near the Clapton net.

A lot of the entertainment came from an increasingly agitated member of the home coaching staff who was doubling up as an assistant referee. When the man in black gave one offside decision in their favour, he boiled over and stomped onto the pitch to give him an earful. The whistler admirably ignored him.

Next a couple of geese made a low swoop over the action. They then proceeded to arrogantly strut across the pitch.

On seventy minutes, the hosts got an opportunity to get back in the game. Our left back enforcer Chelsie Osborne was deemed to have enforced an opposition player a bit too hard. Penalty Rangers.

The Regents Park player hit it down the middle. Adams dived to her left, only to see the ball pass agonisingly close to her trailing foot. Anyway, she thinks she should have done better:

But the Tons instantly snuffed out any Regents Park momentum. Straight up the other end, sub Bethia Green was brought down in the box. It broke to fellow sub Lenny Holmes, who scooped home. But the ref didn’t allow the advantage and pulled it back for the spot kick. Funnily enough, we didn’t hear the linesman complain about that one.

The Rangers keeper managed to block Monahan’s effort, but couldn’t keep out her rebound. 4-1 Tons.

Things just weren’t going well for the home side.

Chadwick hoofed the ball into the stomach of an opponent at point blank range. As she apologised the Rangers player deadpanned: “Yeah I’m okay. Made me piss myself a little but I’m okay.”

Just before the final whistle, another sub made her mark. Marta Boiro lined up a free kick on the right flank. The Rangers goalie was watching the Clapton forwards waiting for a cross. But Boiro had her eye on the near post and curled in with pinpoint accuracy.

Particularly pleasing was the contribution of those subs. Boiro scored a goal. Green made a goal. Holmes robbed of a goal. Williams solid as ever. And Ciara Robinson made life difficult for the hosts when she came on too.

Next weekend, the team travel to play Hampton and Richmond Borough. They will be keen to record a first victory over their rivals after a draw and a wind-assisted defeat last term.