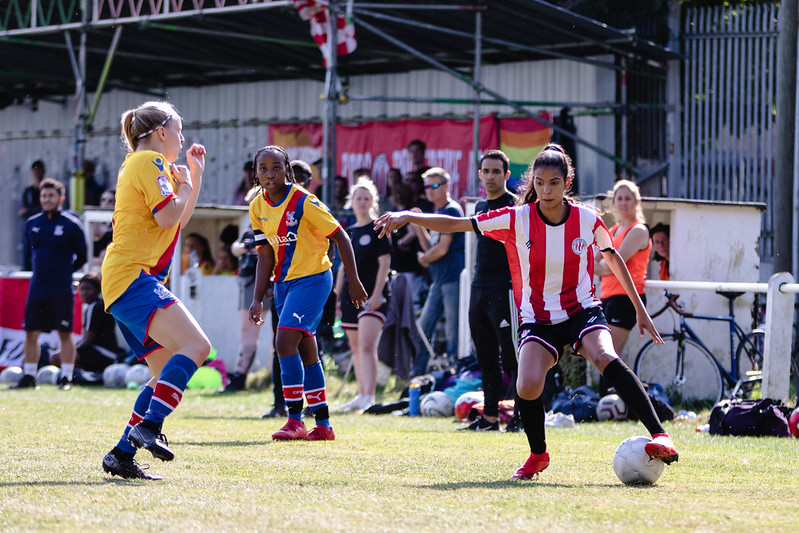 Our women’s first team got their first points of the season on Sunday, with a comfortable win over Crystal Palace Development at the Stray Dog. It was quite the turnaround from the 4-1 defeat to the same opposition on the first day of November 2019.

It was also a welcome remedy to the anguish of playing so well only to be pipped by Dulwich Hamlet Reserves last weekend.

Joy at both ends of the park

A limited number of spectators enjoyed the game and the sunshine in a socially distanced manner. For the most part, this included returning Tons keeper Polly Adams too.

Coach Claudio Gomes was clearly impressed enough by what he saw in South London, as he named an almost unchanged side. The only difference was the aforementioned Adams coming in for Sophia Axelsson.

This was was a pleasing performance at both ends of the park. Steadfast defence and stylish attack.

Clapton only took nine minutes to go ahead. Larissa Vieira cut in from the left. Glimpsing goal, she let fly, arcing the ball over the keeper from all of 30 yards.

When she latched on to a loose Palace pass, there was only going to be one thing on her mind. She left the last defender in her dust and passed into the net.

On 19, Link bagged another, her third of the season. Again the Palace defence made the mistake of inviting her to run at them. This time, straight through the middle she went. And another calm finish for 3-0.

Job all but done

With the heat sapping the energy and talent on the bench, Gomes shuffled the pack.

Harriet Plows, Ciara Robinson and Bethia Green joined the fray to give Clapton fresh energy. But perhaps inevitably some of the rhythm was lost. Most of the second half took place in the middle of the park.

Palace were showing that they had a lot of ability. But they struggled to find the incision needed to threaten the Tons’ goal.

Their right winger in particular was standing out as a speedy threat. Unfortunately for her, she was being marshalled by Chelsie Osborne. So no chance of any joy there then.

The closest the Eagles came was a late one on one situation. The mostly uninvolved Adams reactivated to rush out and smother the danger.

These people have families

She has the ability to do those magical, unexpected touches that make you get to your feet. Or need to have a sit down. It depends on your starting position really.

Midway through the second half she ghosted past a string of opponents, prompting our match commentator to exclaim: ‘These people have families, Larissa.’ The Merch team ought to be considering a line of T-shirts with this slogan.

And Vieira bagged the final goal, to send the Tons fans home with (even bigger) smiles on their faces. She pinched a bouncing ball from between two indecisive Palace centre backs and dispatched into the far corner.

Next Sunday, the Tons travel to Barnes to play Regents Park Rangers. Another performance like this will do nicely!