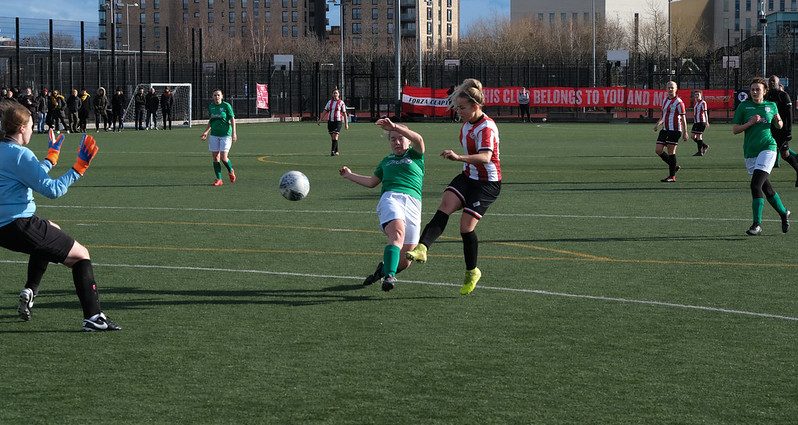 The weekend was a double dose of windswept AstroTurf heartbreak for CCFC.

On Saturday, the men’s team moved their home tie from waterlogged Walthamstow to Mabley Green in Hackney and a game that could have gone either way went the wrong way.

Then on Sunday the women’s 11 moved theirs down the road to Chobham Academy in Leyton and exactly the same thing happened.

The Tons battled back from behind and even took the lead, but in the end they were pipped by Hampton and Richmond Borough.

There were some new names on the Clapton teamsheet. Chelsie Osbourne made her full debut on the left, with Marta Pérez and Leah Coutts on the bench.

The visitors got themselves a perfect start, slotting home from their first attack.

However the Tons stuck straight back. Naomi Scriven played in Lucy Spours, who beat the keeper to the ball and put it in the corner.

But back came Borough. On just 12 minutes they found the bottom corner to retake their lead.

That advantage lasted a mere three minutes. Scriven got in on goal and absolutely rattled it into the top corner.

On 35, Scriven found herself in on goal again and this time finished low. 3-2 Tons.

Former AFC Stoke Newington player Pérez came on and impressed with some tidy touches and a fierce shot that went just over the bar.

Gone with the wind

Unfortunately the half had one more twist in store as the wind managed to get itself on the scoresheet. A Borough punt rocketed into the Clapton area. A massive bounce off the 3G deceived Susana Ferreira and it went in for the equaliser.

And at the start of the second half, the visitors went back in front. They managed to force home a swirling corner. Sometimes these just can’t be defended against.

Although the wind was a constant menace, the smooth surface saw good football being played, something that’s just not been possible on Winter-ravaged grass. Verity Philips stood out in the middle of the park with slick turns and bursting runs.

Caution to the wind

The Tons looked the better side for spells in the second period. Scriven had a couple of half chances, but the away defence was resolute.

Ferreira had to make a good save to prevent Borough extending their lead when an attacker shot low from the right hand side of the area.

Clapton committed players even higher up the pitch, but in the end they just couldn’t find another equaliser.

Credit to Hampton and Richmond, who managed to deal with the difficult conditions that touch better.

Scorer of the opening goal Lucy Spours was excellent throughout.