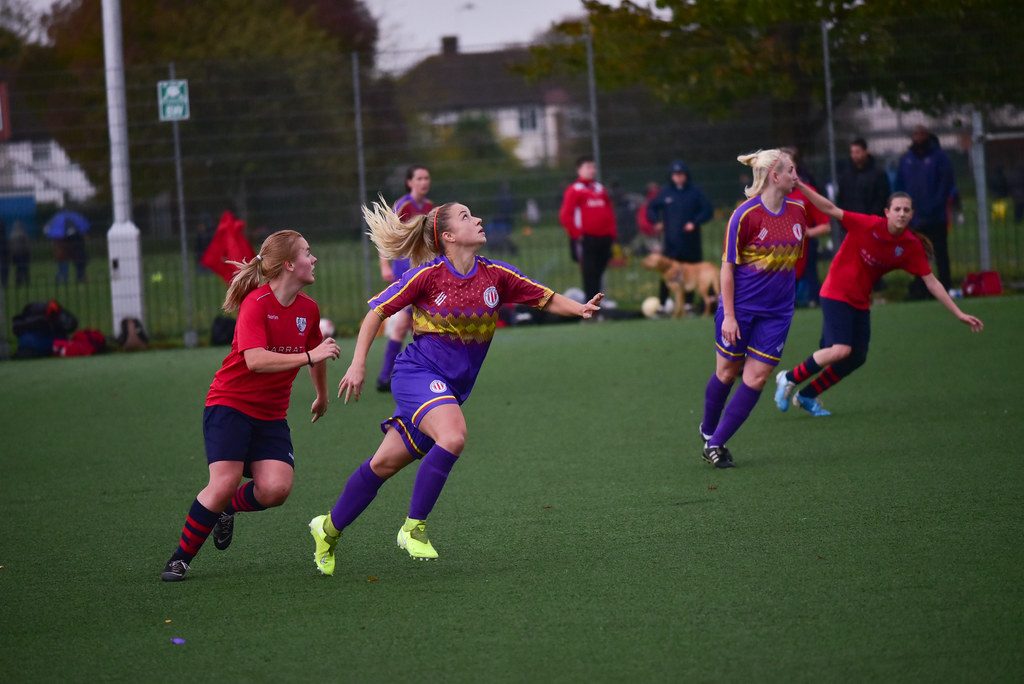 Clapton women’s first away game in well over a month took them out to Feltham to play a Hampton & Richmond Borough side with whom they were level on points in the league. And they still can’t be separated after Sunday’s highly entertaining draw.

There were three changes from last weekend’s 4-1 loss to Crystal Palace Development. Lucy Rolington came in to central defence. The attack featured Harriet Plows on the left and Saskia Walker through the middle.

A game of four seasons

This game was played in a 3G cage. The ball refused to be judged. It kept bouncing higher and sliding further than the players expected. And to add to the challenge, there was at least four seasons’ worth of weather just in the first half.

Initially, Clapton dealt with the conditions better. The first half saw Ciara Monahan and Zhane Amoaten boss the midfield. Naomi Scriven was getting joy against the Borough left back. A determined defence were cutting out any danger at the other end.

The first chance came on seven minutes when Scriven was alert to a quick throw in. She fired across the box, but the onrushing Plows just couldn’t stretch to tap in.

On 22, Monahan volleyed a throughball, that bounced just in front of the Hampton keeper. Scriven was first on the scene, but side-footed agonisingly wide.

A couple of minutes later and Scriven was in the same position. This time the keeper managed to get there first and scramble it away. Amoaten picked up, pirouetted on the edge of the box and shot just past the post.

The pressure was growing. A Clapton goal seemed likely, then came.

With 28 on the clock, Scriven floated in a delicious ball from the right. It landed right on a sweet spot just out of the goalie’s reach where about five players were challenging. Plows managed to head it home for a deserved lead.

Shortly afterwards, there was a warning that the hosts were not going to go down without a fight. A lofted cross-shot from the right plonked itself down on the Clapton upright.

The Tons had a couple of great chances to double their advantage. Scriven backheeled a ball out from defence to Walker, who then played it back to her. Scriven shot to the near post, but it was beaten behind by Hampton’s keeper.

Then a precise floated Monahan free kick was headed just wide by Amoaten.

When a team is on top and doesn’t convert chances, there is that nagging feeling that they will be made to pay. When Hampton then put in a couple of corners that flashed across the goal line, the nagging feeling became a gnawing feeling. Then, just before half-time, from another corner, a Hampton player headed in an equaliser.

In the second half, the momentum changed. And Borough quickly took the lead. A cross from the left flew straight into the far corner of the net.

Clapton supporters tried to encourage a fightback. One of them had won an eBay bid on a five-piece percussion set last week. This allowed the visiting fans to bash out a crude samba beat using wooden spoons bought from a local pound store.

Members of the home team started getting their groove on to this while the ball was out of play. In a way, it was nice to see. But another popular opinion was: ‘this is to support Clapton…it’s not for you lot.’

But the team in purple were struggling to regain their rhythm from the first half.

On 62 minutes, Hampton nearly stretched their lead, glancing a header just past the post from another corner.

Where Scriven had found space on the right in the first half, Plows now found it on the left. And she added to her goal with an assist.

Amoaten picked up the ball in a crowd of players in the box. Not much on. She jinked one way. Still nothing on. She jinked the other way to make a momentary gap and curled into the top corner. A brilliant goal to bring the score level.

After that the game opened right up. Both teams had proven they could break the other down and fancied the full points.

But the late flurry of chances failed to throw up a winner.

Manager Patrick McLaughlin gave his take on the game, the goals and the challenges ahead.

Zhane topped off a performance of tricks, flicks and precise passing with a truly wonderful goal when the team needed it most.