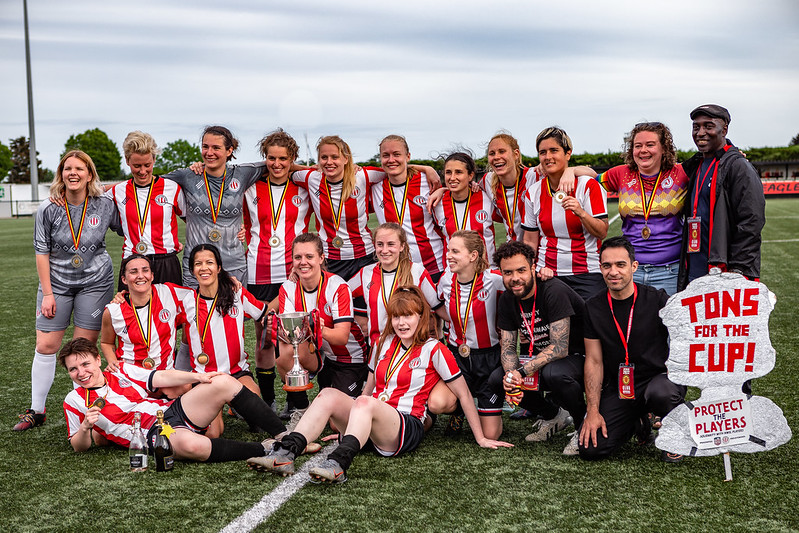 Clapton Community’s women’s team rounded off the season with a richly deserved cup win over Enfield Town Thirds, on a gloriously sunny May Sunday at Bedfont Sports Club.

Having made history with their run to the third round of the FA Cup and had a good pop at Dorking Wanderers in the final of the Capital Women’s Cup, it would have been an anticlimax had there not been something to show for the 2021/22 season. And an absolute peach of a volley from Lucy Spours meant that it ended on the best possible note, bringing the John Greenacre Memorial Trophy back to East London.

Saving the best until last

Clapton started the game on the front foot, living up to their billing as firm favourites. They had beaten won 11-0 at home, with the away fixture awarded as a walkover against the team who had finished bottom of the Greater London Premier. But Enfield had shown they were no mugs with an impressive run to this final that included a 5-4 victory over Islington Borough. And once they had got settled, they held the red and whites at bay.

There was little goal threat until the half hour mark when Polly Adams scooped up a low shot.

Then a Mim Chadwick corner from the left fell invitingly to Marta Casanovas in the six yard box. But the Town goalie was alive to the danger and blocked.

Another corner. Again, Chadwick fired into the danger zone. This time a defender headed up into the air.

It dropped into the space on the edge of the box where Spours was lurking. Time slowed down. A rashly swung leg and the ball could have gone straight into the engine of one of the jumbo jets passing above. But Spours caught it with immaculate technique, steering off the base of the inside of the post where it made a satisfying ‘doof’ sound. It flashed across the goal line, then kissed the opposite post, nestling in the side netting. The poor Enfield goalie spun round in irked disbelief. There was a split-second of delayed reaction from the Clapton support before the explosion when they realised it had actually gone in.

Unfortunately for Spours, the member’s vote for goal of the season had only just closed a couple of days earlier. It would have cleaned up.

Just before half time, the Enfield number 4 showed some nice skill to make space for a shot on edge of box, but could not get enough power in the shot to trouble Adams.

Then a sublime touch from Casanovas to beat her marker on touchline, but the throughball was scooped up by their keeper, who was having a good game and couldn’t have done anything about the goal.

In the second half, Enfield continued to show they were not going to go quietly. Their standout player, number 4, showed another bit of skill and curled a long range effort past the post. Another good run and shot from Enfield was then smothered by Adams.

But the Tons were making chances too, with Emily Link spearheading most of their attacking play. Clapton’s top goalscorer pulled an inviting ball back from left, but Marta Boiro put it over the bar.

Then another Boiro effort from edge of box a minute later, but the Enfield keeper was able to gather.

Further chances fell to Link and Maria Mendonca, however Clapton just weren’t have their best day in front of goal.

As the clock ticked on – and Enfield continued to show menace – this made for a nervy end to the game.

When their number 9 showed some tricky footwork and drew a foul on the edge of the box, Town had their best chance to draw level. Number 4 stepped up and dinked the free kick right off the top of the crossbar.

Shortly afterwards, Adams played it safe and tipped another Enfield free kick over the bar.

Clapton then had a glorious chance to put some sheen on the victory in injury time. Substitute Ana Holmes sprinted down the left and middled for Link. The ball was then spread out to another substitute, Ciara Robinson, whose shot was well saved.

But it was not to matter. The referee blew for full time and the cup was Clapton’s!