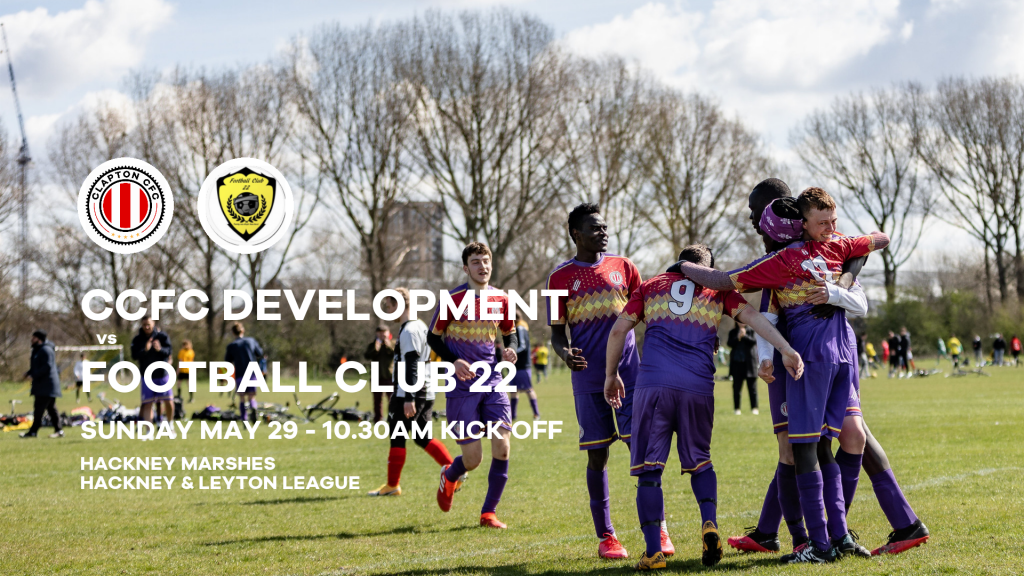 The season is not quite over yet for all of our teams – the men’s development team are in action on Sunday morning against FC 22.

With the team already confirmed champions, and our opponents relegated, it should be a good opportunity for the side to put on a show – and for fans to see a Clapton CFC team lift a league trophy.

The team confirmed their status as champions in some style with a 10-1 victory over bottom placed Gorillas back on May 8.

A strong end to the season, winning seven games in a row, wrapped up the Hackney & Leyton Sunday Football League Division 3 title.

While the team officially has two games left of the season, this game is likely to be the final game of the season to avoid it spilling over into June.

Promotion to Division 2 now follows, and the management team of Justin Cummins and assistant Tom Marsland will be targeting the same outcome next season, ideally with a cup run too.

Keep an eye out for details of open trials over the summer.

The team has already started producing players for Geoff Ocran’s first team – the likes of Samba Badjana and Fama Sangare were mainstays last season, and this season Fionn Glancy, George Bennett and James Pavely have all got minutes for the first team.

The link between Clapton and Renaissance FC has also been vital to the team’s success this season, with 3 players joining CCFC. Shanjowk Chol is the team’s top scorer, with 25 goals in 20 goals, and Yassin Mohammed and Samuel Makueth have made vital contributions.

Crucially, after the game the team will be presented with the league trophy, and it would be great to have plenty of fans down to watch! Kick off is 10:30am on Hackney Marshes – keep an eye on the club’s Twitter account for the exact pitch location.

Hackney Marshes is a public park so please be mindful of this if you do come to watch – no pyro, glass bottles, and be aware of the other games that will be taking place.