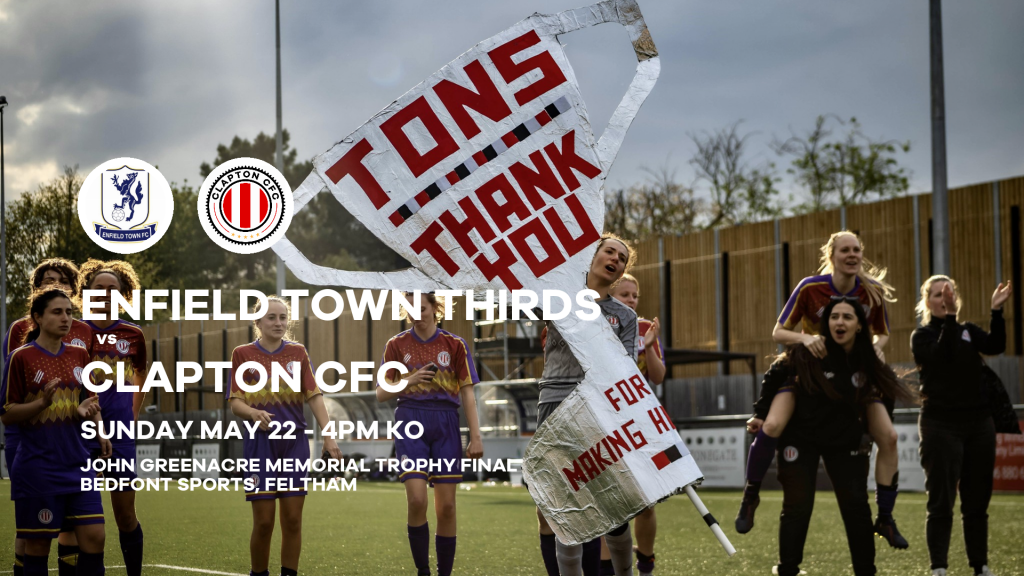 What a season it has been…  and It’s not over just yet.

It’s a final chance of silverware for the women’s first team after the near misses in the league and in the Capital Women’s Cup final – not to mention the FA Cup run.

Enfield Town Thirds finished bottom of the division so you’d make CCFC the favourites, instead of our usual role as cup underdogs.

The Towners have been superb in cup games this season, winning 6 of 8 games including against division runners-up Islington Borough. So they are very much cup specialists.

The John Greenacre Memorial Trophy is the league cup competition, for teams in our the Greater London Women’s Football League.

It’s named after John Greenacre, who was instrumental in founding West Ham Ladies and was GLWFL fixture secretary.

Our cup final is the third of the day at Bedfont Sports. At 11am it’s an East London derby between Forest Crusaders and AFC Leyton, then at 1.30pm it’s Islington Borough against Brentford B.

Clapton CFC vs Enfield Town Thirds is on Sunday, May 22 2022 at 4pm at Bedfont Sports, Hatton Road, Feltham TW14 9QT

Bedfont Sports, near to Heathrow Airport, is where the first team have battled it out against Brentford a couple of times previously. The men’s team have played Deportivo Galicia there too.

It’s £3 in cash for adults – please bring the correct amount, cards not in use at the turnstile. It’s free for children up to 15 years and pensioners. All proceeds will be donated to charity organisation Refuge.

A free matchday programme will be available at the turnstiles.

Food and drinks are available throughout the day and both cash and cards are accepted.

No dogs or pyro allowed, and they only allow small hand-held flags.

The league advise that the penalty for any use or possession of pyro is suspension and or expulsion of the team from the league next season, a £500 fine plus damages.

These rules are for all teams and all games, not just ours.

Bedfont Sports is located just past Bedfont & Feltham FC – it’s easy to get them mixed up.