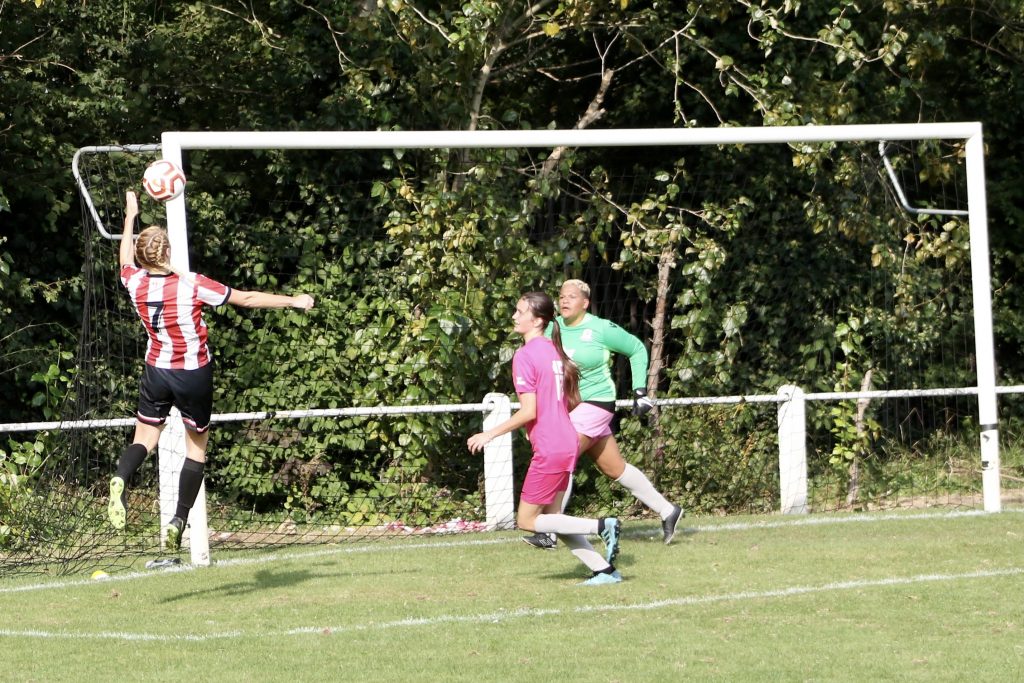 Clapton went into the game looking to build on last weekend’s superb win at Comets WFC and extend their stay at the top of the table by beating Enfield Town Ladies Thirds at The Stray Dog.

Eagle-eyed followers of Clapton would’ve noticed that this season we are playing Enfield Town’s third team and not their reserves. This was due to Enfield deciding to field their second-string in the National League Reserve Division this season. Which, in turn, caused Enfield’s Third team to be promoted to the GLWFL Premier Division in their place (despite finishing second bottom in the league below in the truncated 2020/21 campaign).

If you can work that out, a promising career in non-league football administration awaits you.

Clapton made just one change from last week’s starting line-up with Allana Scoble starting at right back in place of Verity Phillips.

Enfield looked bright in the opening exchanges, but it wasn’t long before the Tons found both their groove and their scoring boots.

Without spoiling things too much, it is going to be easier just to list the goals as and when they happened. Something that would not have been possible were it not for the club Twitter account. Deep breath, here we go…

Marta Casanovas opened the scoring for the Tons firing home with some venom following a pinpoint pass by Emily Link.

Barely sixty seconds had elapsed since the first goal, when Link’s looping header from a Marta Boiro corner wrong footed the keeper and double Clapton’s advantage. I think Boiro fooled everyone (except Link) into thinking she would be looking to continue her impressive streak of scoring direct from corner kicks.

The Enfield defence were struggling to contain our forward trio of Casanovas, Link and Maria Mendonca, so it was no surprise when Link broke clear and saw her shot take a slight deflection and find its way into the back of the net.

Mendonca was next to get in on goal scoring action – her shot looping agonisingly over the Enfield keeper before dropping into the side of the net.

With less than a quarter of the match gone, Emily had bagged a hattrick, nodding a tricky bouncing ball over the keeper from almost on the goal line. Unofficially, we are looking at an eight-minute hattrick for Link! Remarkable.

Casanovas found Mendonca just inside the area. With a lot still to do, Mendonca fired coolly past the keeper.

The first noteworthy moment that did not result in a goal. Unfortunately, it was a nasty one: an Enfield player went down with a painful knee injury after twisting it on the turf. A lengthy stoppage ensued. Best wishes, for a speedy recovery from everyone at Clapton.

Link bursts down the right before firing a low ball across the six-yard box for Boiro to slot home.

First half was tough for Enfield. They’d lost a player to a serious injury and had taken something of a beating from a Tons’ forward line with a ruthless eye for goal.

In his half-time team talk Claudio Gomes, was sensitive to the visitors’ predicament, but reminded his players that other teams in the division would feel no guilt at piling on the pressure in the second half. There was a timely reminder that promotion could be settled on goal difference.

With the manager’s words still ringing in her ears, Link fires home her fourth goal of the afternoon in a trademark one-on-one with the keeper.

Substitute Ciara Robinson gets in on the action with a close-range header after the ball came back of the bar.

Link re-emerges after a short spell on the bench to – almost instantly – fire home her fifth goal of the day from distance.

Double figures for the Tons which was enough to cause a malfunction to our hi-tech scoreboard. Still, nothing a bit of strategically placed gaffer tape couldn’t fix. After a few minutes of confusion the scoreboard was operational once again.

The scoreline itself is a club record, and Emily Link is the first Ton to secure a double hat-trick too. This one did take her 31 minutes, mind. Standards are slipping…

With just five minutes left on the clock, Polly Adams is called into action for the first time in the match, with a great save to keep the Enfield striker at bay.

Like buses, you wait all afternoon for Adams to have to make a save, then two come along in quick succession. Fear not, the clean sheet bonus is safe in Adams’ hands.

An incredible performance by the Tons, especially given how hard it is to keep the momentum going when already so many goals to the good. Credit too to the visitors for playing with heart – right through to the final whistle.

With a berth at the top of the table secured, next week attention turns to the FA Cup and a local derby at Haringey Borough. Despite Haringey being two divisions our senior – with the Tons on this sort of form – a ‘Cupset’ could be on the cards.