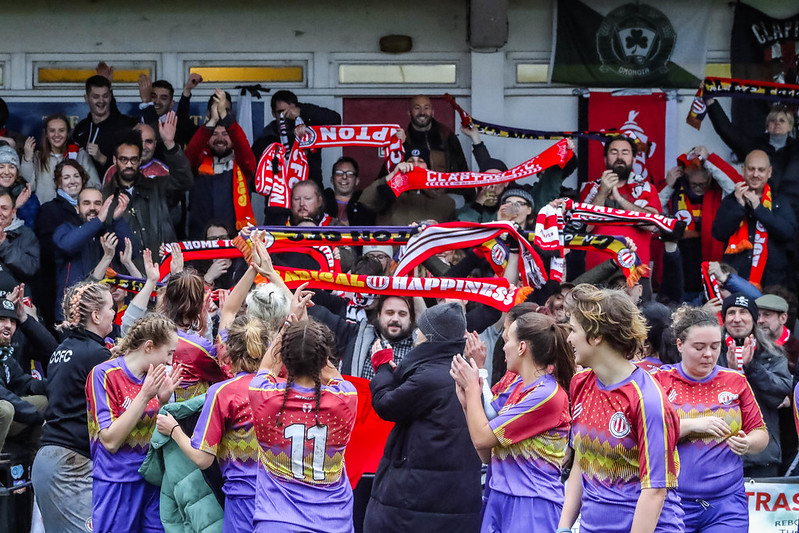 What a journey this has been.

It has been a hike up the footballing pyramid, clambering over higher opposition on each tier. The players have handled the stress of penalty shootouts and media appearances alike.

We have made friends at the clubs we have played against and allies in the fight for fair funding of the Women’s FA Cup with clubs we have not.

Then there was the physical journey to the Western extremity of England, only made possible by generous donations to our crowdfunder.

The team gave it everything like this team do. The club brought the collective joy like this club does. But it was the end of the road for this particular adventure.

Plymouth Argyle are in the National League South, same as Hounslow from the previous round, but were always going to be a different proposition sitting several places higher.

Clapton’s task was made harder by the absence of three of the stalwarts of this season: Emily Link, Lucy Spours and Mim Chadwick.

As expected, Plymouth started on the front foot.

Kiki Marino had to made a vital intervention to prevent a near instant opener. On four minutes, the Tons had a free kick in “the Boiro Zone,” but Marta curled just past the post.

Shortly afterwards, Argyle broke the deadlock. Zoe Cunningham cut back from the right byline for Natasha Knapman to finish. That this is the first time we’ve been able to link to an opposition player’s Wikipedia page says something about the jump in pedigree.

As so often, Clapton had keeper Polly Adams to thank for keeping them in the game with bags of saves, running right up the difficulty scale.

One, on 23 minutes, was truly jaw-dropping. She pushed a fierce drive from just inside the box onto the bar. It fell to a lurking Plymouth attacker who could not turn in.

Clapton were soaking up a lot of pressure, while looking capable on the break. They tried to get it over the top for Ana Holmes to chase, but the Plymouth defenders were keeping her tightly marshalled.

On 26, Maria Mendonca made and narrowly missed one of Clapton’s best chances, weaving in from the wing and curling just past the far post from a tight angle.

Plymouth had an edge and ruthlessness about them. Knapman has a black belt in taekwondo, after all (thanks Wikipedia).

But there were some great moments of skill from Clapton too, not least a backheel nutmeg from Mendonca, while Adams continued to show off her full range, from one handed reflex save to perfectly executed diving catch.

Into the second half. Otherwise known as Operation Keep It Tight And Try To Nick A Goal.

That quickly went wrong, when the assistant ref gave a Clapton throw in the Plymouth half, but was overruled by the ref.

The hosts took advantage and put it down the line. Knapman put pressure on Annie Lyons, pinched the ball and cut back for Cunningham to score.

Now it was all one way traffic. On 60, again Clapton were sliced open by incisive Argyle passing and Amber Pollock added their third.

Then Adams made another excellent save, palming a top bins-bound effort round the post for a corner.

The Tons were staying admirably true to their style and trying to play out from the back. But as legs tired, they were finding it increasing difficult to get up the pitch, let alone stay there.

The Pilgrims were relentless in their attack and on 82 minutes Gemma Rose fired in number four after more slick play. The final nail came with almost the last kick of the ball, when Imy Crawford scored from distance.

Plymouth were streets ahead of any other team Clapton played in the competition. Whereas previous opponents had the odd dangerous player they tried to channel everything through, Plymouth had quality in every position.

We will have to assume the goalkeeper was good too, although we did not quite manage to put that theory to the test!

The full time whistle brought a great outpouring of emotion. Initial disappointment was quickly overwhelmed by pride at the incredible achievements of this bunch of players and coaching team.

There were more than a few damp eyes around. And that was not just because our goalkeeper was firing champagne into their faces!

The singing from the fans continued unbroken until after the Argyle players had got changed and re-emerged. They even had to do post-match interviews over the din.

The party moved to the clubhouse, then to Saltash train station. The heartfelt apologies of the club go out to any other passengers booked on coach B of the 16:45 South Western Railway service from Plymouth to London Paddington.

In the words of Polly Adams, ‘same again next year?’