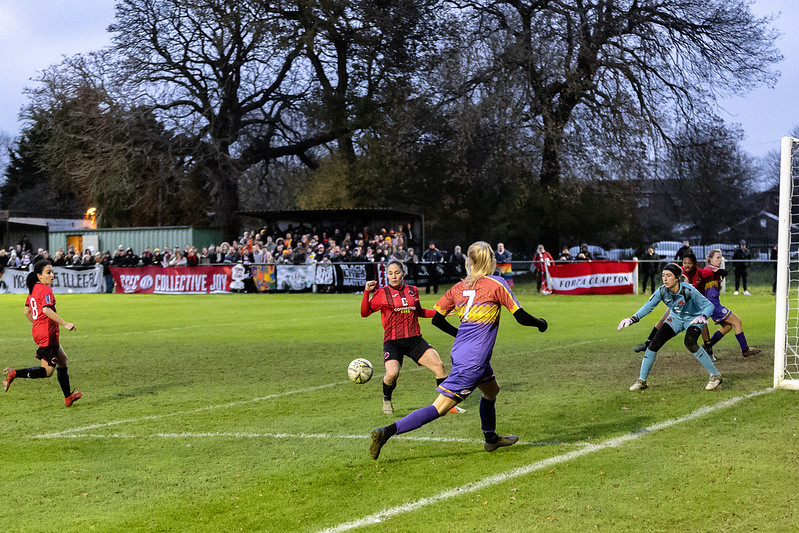 In the history of the Women’s FA Cup, no seventh tier side has ever progressed to the third round proper. No-one had ever beaten a side four tiers above. Both records: shutdown.

For all the gap in levels, Hounslow have been on a dire run of form, not scoring a single league goal all year. That lack of confidence and momentum gave Clapton a fighting chance coming into this second round tie.

With no new injuries, Claudio Gomes had the privilege of being able to name a very familiar starting eleven.

Clapton had an early let off. A slack ball across the backline was snaffled up by the opposition seven, but Polly Adams blocked then Alice Nutman cleared the loose ball.

Shortly afterwards, the hosts had a free kick on the edge of the box that Adams did well to palm over the bar. She would have been grateful for the opportunity to do a bit of work, as although sunny, it was bone-chillingly cold in West London.

As with the previous games against Haringey (shutdown), Biggleswade (shutdown) and Bedford (shutdown), the Tons quickly found their feet. Before long, there was little to no way of telling which was the higher ranked team.

Hounslow had more of the ball. They looked to have decent quality in all positions, with their standout being in the number seven shirt.

It always seems like the number seven is our standout opponent. We should double check it’s not literally the same person who just really enjoys playing against Clapton.

All that said, the Tons looked dangerous on the break. The pattern of the game was already set. On 18 minutes, Lucy Spours slid Emily Link through for one of the visitors’ best chances of the afternoon. The Hounslow keeper managed to parry Link’s shot behind for a corner.

There were not so many opportunities in the first half, but it was anything but boring. There were fascinating battles across the park. None less so than Hounslow’s fleet-footed seven against Tons left back Mim Chadwick. The defender was coming out on top with some titanic challenges to neutralise their main threat.

At the other end, Hounslow had wingers Marta Casanovas and Maria Mendonca shackled, so the Clapton were relying on Link’s hold up play to get up the pitch.

The West London side came out in the second half with a renewed sense of urgency. Someone had reminded them they were the overwhelming favourites and had to prove it on the pitch. This was the trickiest patch of the game for the Tons as they battened down the hatches for a bit of a Hounslow onslaught.

Adams made a couple of saves you would expect her to make and saw a dangerous ball flash across the six yard box with no one to connect.

Then on 57 minutes, a Hounslow midfielder tried to curl one into the bottom corner, but Adams dived to tip round the post.

Hounslow’s seven had switched over to the left wing to put herself up against Kiki Marino. The Tons right back matched the first half achievement of Chadwick to keep the threat to a minimum.

The one time she did escape Marino in the box, Adams was there to save with her knees.

Storm weathered, Clapton started to test their opposition again with some of the counter attacking play missing in the early part of the half.

Casanovas crossed low from the right. Link latched on but her looping shot was easily caught.

As against Bedford, Gomes reserved the pace of the Holmes sisters on the bench, then deployed with perfect timing. The former Portishead Town players gave the opposition fullbacks sour times for the remainder of the match.

On 85 minutes, Link flicked one through for Ana Holmes and the keeper only just got there first.

With the end of normal time looming, Holmes bought a handball and a free kick for Clapton near the corner flag. Marta Boiro drifted it just over.

For the second consecutive round, Clapton took it into extra time. This was already a big achievement. But there was more.

Far from holding on for penalties, the Tons seemed to have the bit between their teeth and were looking to take the tie.

Link cut in from the right and her parried shot just eluded Boiro.

Clapton took a short corner. This gave Boiro a better angle to pick out a cross, to the back post and onto the head of an unmarked Ana Holmes. But the winger could not divert back across goal and glanced it just past the post.

Even with legs tiring, Clapton continued to showcase what is so good about the way they play. The ball is rarely thumped down field. Nothing demonstrated this better than Annie Lyons, in extra time in this massive game, receiving a short pass from Adams and casually skipping around Hounslow’s pressing number seven in front of her own goal

This calmness is a hallmark of the team. Defenders pick out passes. Li Steiner receives facing her own goal and turns. Spours carries forward. Boiro holds up, flicks away from her marker, picks out passes.

In the second half of extra time, there was a long delay as a Hounslow player was down injured. The players in purple began to dance to the drums and swelling chants of ‘Forza Clapton’. To keep warm? Yes, it was bloody freezing.

But with the benefit of hindsight, this little moment of spontaneous magic showed which side would have the mental steel to win a penalty shootout. The contrast in body language was striking. One group exuding confidence. The other tense and nervous and couldn’t relax.

There were late chances for Link and Marino as the Tons seemed the likelier side to snatch the victory. But the home keeper did the business and that was it for extra time. No goals, but an enthralling contest.

Both teams had come through the first round via penalties, Hounslow after a 1-1 draw with Worthing. Prepared keepers of old would have a notepad in their socks. Who tends to go right, go left or down the middle. Adams whacked out a phone and just watched Hounslow’s last shootout. Progress.

Boiro was the first to make the long walk. She took a short run up and fired into the corner.

Then Adams managed to save Hounslow’s first effort. But it was all square again after Marino’s penalty was well saved and the home team buried theirs.

Not to worry. Link converted to put her agonisingly narrow miss against Bedford to, ahem, bed. The keeper got a hand to it, but could not keep out. Then Adams pulled off another stop to restore Clapton’s advantage.

Just as Lyons was about to strike her team’s next penalty, she slipped. That could have sent the ball into orbit, but instead it rocketed into the roof of the net. A big slice of fortune, but it ended up being a completely unstoppable penalty.

All the pressure was now heaped on Hounslow’s fourth kicker. When she fired over the bar, it was all over.

Clapton will be away to Plymouth Argyle in the third round on 12 December 2021. The Pilgrims are in the same Southern Premier Division as Hounslow. They are not doing much better, with one win, no draws and seven defeats in their opening fixtures. But one of their players does have a Wikipedia page.

Can lightning strike for a fifth time?