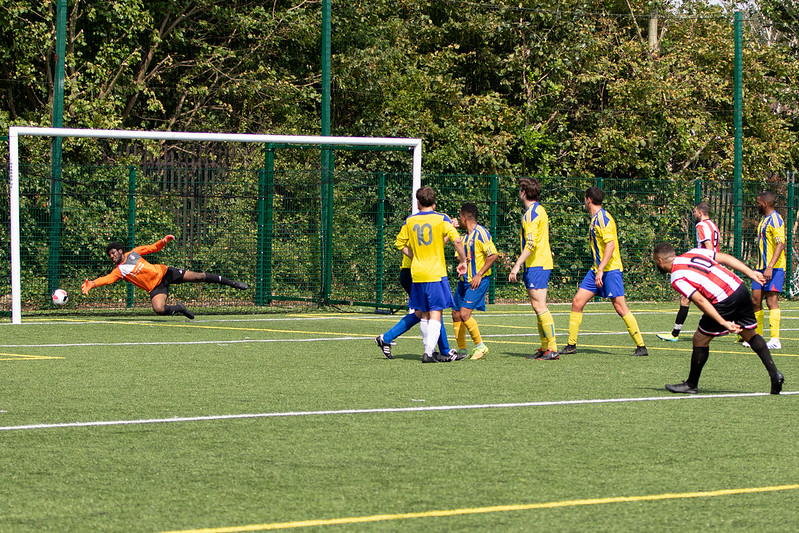 Clapton continued their behind-closed-doors pre-season on Saturday with a comprehensive victory over familiar foes Sporting Hackney thanks to a clinical second half performance.

Sporting were the side on the receiving end of CCFC’s first ever victory in a friendly back in August 2018, but gained revenge in last summer’s friendly.

However, the Tons also ran out victorious in the first league game of the now abandoned 2019/20 season almost a year ago – a 2-0 home victory that saw a competitive debut goal from Noah Adejokun.

The Tons team this time round was made up of trialists (including the hat-trick hero from last week), familiar faces, and fringe players pushing for a first team place.

And we’re off. Team: pic.twitter.com/50XEdERyen

The Wadham Lodge 3G pitch was glowing in the unrelenting sunshine, and the high temperatures contributed to a slow start.

The breakthrough came half way through the first half, a free kick under the wall from last week’s hat-trick hero trialist – sign him up!

Credit to expert management from the gaffer Geoff Ocran too, adamant that it needed a right footer to take it, much to the dismay of Justin Cummins.

Sporting hit back straight away however, Clapton losing the ball in the midfield, and the chance breaking to a Sporting player on the edge of the box, who lashed in a shot that left keeper Jack Francis no chance.

As the half wore on, Clapton took control, with half chances for Noah Adejokun and Alby Miller.

The second half saw Clapton take even more control, with four unanswered goals and a comfortable performance.

Clapton’s second goal came from neat work between two more trialists, a cross from one being blasted home from 6 yards by another.

The same trialist then bagged two more, both coming from penalties sandwiched either side of a lovely Noah Adejokun finish – the younger Adejokun brother probably just pipping others to be Clapton’s player of the match.

There was even time for a cameo performance up front for centre-back Tom Carding, but sadly a chance to claim his first Clapton goal never arrived.

Another good pre-season performance from the Tons, especially in the second half, with some eye-catching performances highlighting the strength in depth the team now have.

Solid performances from the trialists on show will also give the management team food for thought.