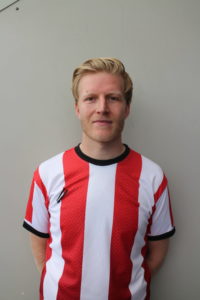 Full Name: Thomas Carding
Place of Birth: Chester
Place where you live: Forest Gate
Day job: Sixth form teacher
Favourite player: Ivan Zamarano
Favourite team, apart from Clapton CFC: Ipswich Town
Most memorable match played in: I won the double with my university team, and lifted the cup as captain
Favourite ground played at: I liked the Friday night at Wadham Lodge, but the first game at the Stray Dog with over 400 fans there was pretty memorable too
Biggest high in football: Probably this season so far to be honest. Unlike most of the lads, I’ve not played at a higher level before, and I’ve loved the buzz and the support so far
Lowest point in football: The elbow to the face a couple of years ago which split my lip and left me needing stitches and time off work and playing
Likes and hobbies: Football, cycling, politics, music, food
Dislikes: I think Sham’s answer to this summed it up really well (‘Racism, sexism, homophobia, Tories’)
Favourite charity: Lola’s Homeless does great work in Newham
Favourite country visited: Italy
Favourite food: Indian
Favourite music/performers: Talking Heads
Favourite TV shows: The Wire, The Sopranos, Bake Off
Favourite film: I’m going to watch Land and Freedom again after all the interest in the Spanish Republic shirts
What you love about football: Winning, clean sheets, slide tackles
What you hate about football: Conceding, not starting
Biggest influence on you: My parents
Footballing ambition: Establish myself as a starter and help Clapton CFC do the double (at least)
Who you would most like to meet: I always find this question a bit strange. They say you shouldn’t meet your heroes. Let’s say some of our Spanish fans on an end-of-season tour!