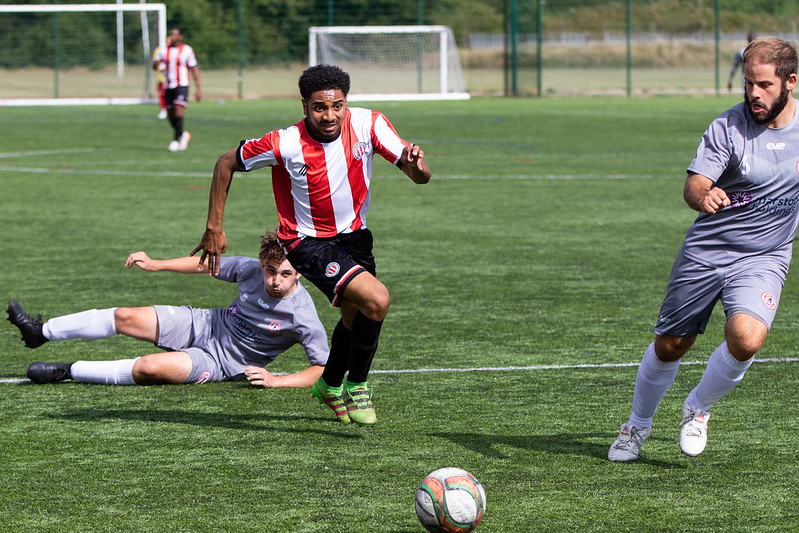 140 days after our last fixture against Cricklewood Wanderers, the Clapton CFC men’s team returned to action for a training game.

Both the men’s and women’s first teams are planning some low-key games to prepare for the 2020/21 season.

The circumstances here were obviously unusual – behind closed doors on a 3G school pitch in Dagenham – but it was a useful win and clean sheet nonetheless.

Opponents Chadwell Heath Spartans were set up just two years ago by the Hunwicks family “to attract youngsters to help keep them off the streets and out of trouble”.

Spartans’ first season in the Essex Alliance League Division Three was heading to a glorious finish, winning 13 out of 14 games, before the abandonment of the season.

This fine form has been rewarded with Spartans being moved two rungs higher into Division One of the Essex Alliance League next season.

The Clapton CFC team featured three trialists in the starting line-up and another three among the subs sprinkled among tried and tested players.

With the game played in lockdown, we had just the players, coaches and a photographer present, so it’s impossible to provide a match report.

However, it is apparent that a trialist stole the show by bagging a hat-trick – including two penalties.

That trialist later revealed himself to be former Hale End Athletic wideman Dan Florence. Sign him up, Geoff!

And some photos from Chadwell Heath Spartans’ Facebook page:

Player-manager Geoff Ocran said: “3-0 and a clean sheet. Nobody let us down out there, a lot of good performances. As you would expect there was a bit of rust first half so it took us a while to get into the game.

“But I was impressed that we continued to play throughout the whole game. When we went two and three we controlled the game a bit more, and that’s what we need to do.”