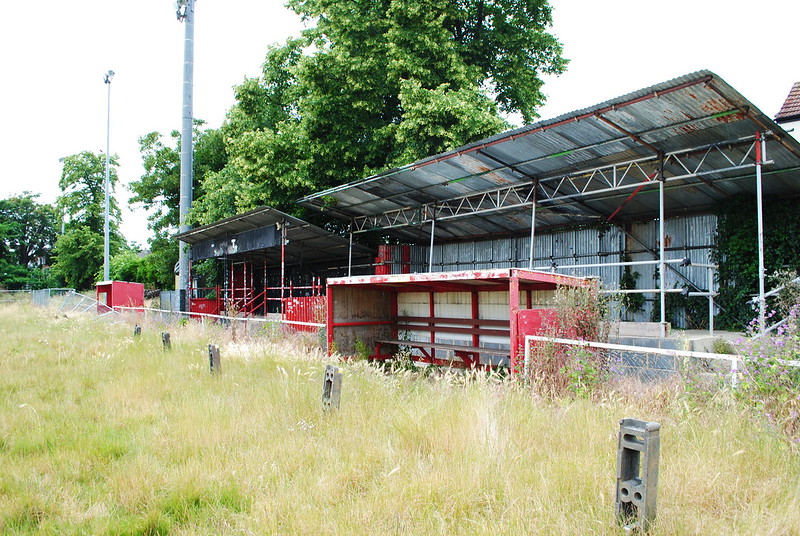 In line with the club’s commitment to financial transparency, this is a summary of the decisions we have taken in order to purchase the Old Spotted Dog Ground.

After years with little apparent progress in the long-running battle for control of the place Clapton CFC supporters consider as their spiritual home, there was suddenly a dramatic turn of events in early August 2019.

The freeholders, Star Pubs & Bars, stepped in to repossess the ground for non-payment of rent by the liquidator acting for the insolvent charity Newham Community Leisure (NCL) that had previously leased it.

On 9th August 2019, we wrote to Star Pubs & Bars making the case for Clapton CFC, as a regulated community benefit society, taking over the lease.

On 16 September, we were told our proposal had been accepted over those from two other bidders and discussions began on the terms of a new lease.

The offer of buying the freehold, rather than leasing it, came up unexpectedly in February 2020 during the negotiations with Star Pubs & Bars.

The offer price was £96,000 plus (reclaimable) VAT and was accepted in principle.

Agreement to proceed with purchase of the freehold was passed at the members’ meeting in February 2020, along with a vote in favour of seeking a commercial loan for £100,000 as soon as we could.

As a result of the sensitivity of ongoing negotiations with Star Pubs & Bars, this was noted in the minutes of the meeting but the club did not publicise this development more widely.

After the members’ meeting, we struggled initially to find a funder who understood what we were planning to purchase, due to the complex issues surrounding the property.

Eventually, we chose Cooperative & Community Finance, because it only lends to the co-operative and social enterprise sector.

It also has enormous experience of community enterprises and unlike many high street lenders, does not require personal guarantees.

In total the loan that they agreed to make to Clapton Football Club Limited (the community benefit society that trades as Clapton Community FC) was for £100,000 and covers the costs of securing the freehold and some legal costs in advance of the purchase, including a professional valuation.

The loan itself consists of two parts: £75,000 from “ICOF Community Capital” and £25,000 from the “Industrial Common Ownership Fund”.

These are two separate funds controlled by Cooperative & Community Finance and it was their decision to structure the overall loan in this way.

The payment schedules and loan agreements for the two parts of the loan are available below.

Our legal costs for arranging the purchase of the freehold were £1,801 (including VAT).

The freehold we purchased covers the pitch, surrounding areas and the clubhouse, but does not include the warehouse at the Upton Lane entrance, which remains (as of August 2020) under the control of the liquidator for Newham Community Leisure (NCL), the charity that previously held the leasehold.

This is because the warehouse was purchased many years ago by NCL with a grant from the Foundation for Sport and the Arts, a former charity that donated funds from Littlewoods and other football pools companies.

It was not leased from Star Pubs & Bars. Unfortunately, although it was bought specifically to provide sporting facilities for local communities in Newham, it has for many years been used as a tyre firm, a breakers’ yard and garage.

One issue for the club is that the changing rooms are in the warehouse building and not within the freehold we have purchased.

This means we either have to reach an agreement with the liquidator or build our own changing rooms elsewhere on the site.

We are exploring both options, and will provide updates in due course.

A copy of the freehold document is available below.

There is an agreement setting out the different obligations, roles and responsibilities, which is available below.

How much will repairs and ground improvements cost?

When we took over the ground, it had been left in a very poor state of repairs.

It was uncertain exactly how much work was needed, especially on the clubhouse, but we knew that the pitch and surrounding open areas will need clearing and there are trees that need cutting back.

The members’ vote in late July 2020 was to allocate £45,000 towards the initial costs. This amount is what we can currently afford.

This was agreed by an online vote of members that passed by 562 votes to zero.

Inevitably this means the Old Spotted Dog Ground Trust will need to continue fundraising over the next year and we will also need to find ways to keep costs down by asking for volunteers, donated and recycled materials and by utilising the skills and expertise of the club’s membership.

Loan agreement for £25,000 from the “Industrial Common Ownership Fund”.

Payment schedule for £25,000 from the “Industrial Common Ownership Fund”.