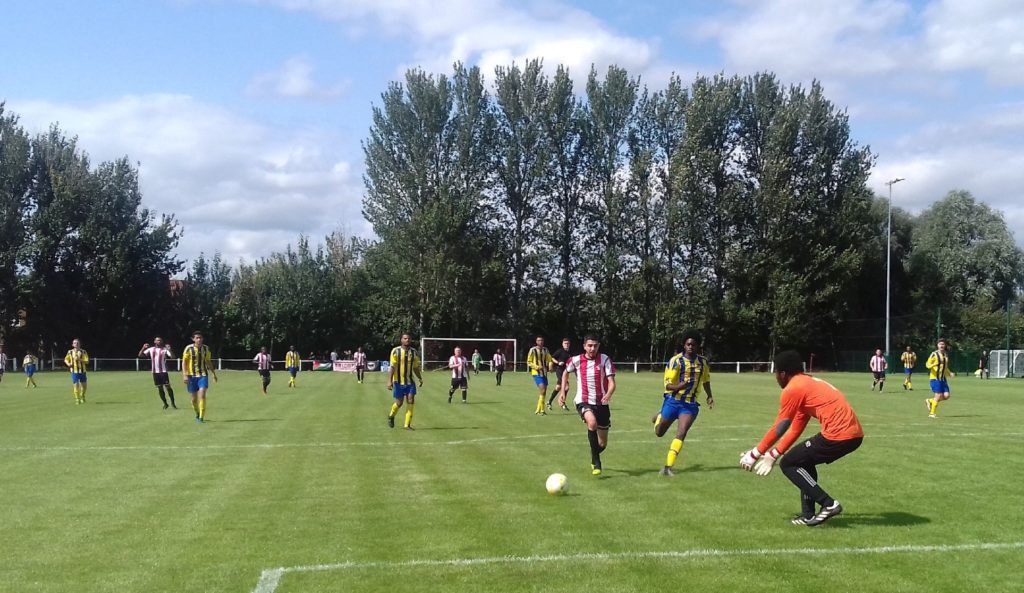 CCFC’s first game at the Stray Dog for over two months ended in a narrow defeat to Sporting Hackney. The visitors had gone 2-0 up in the first half, with Bogdan Panescu scoring what turned out to be a consolation from the spot in the second.

For this clash with a fellow MCFL Premier side Geoff Ocran welcomed defender Liam Smyth and goalkeeper Dan Anfossy back into his starting lineup.

Ten minutes in, Panescu ran onto a through ball. The defender and goalkeeper charged at him and the Clapton player became the meat in a Hackney sandwich.

It could have been a red – or even two – if it wasn’t a friendly, as there was no one else between the forward and the net. Just a free kick on the edge of the box. Smyth drifted it past the post.

As the half progressed, Sporting Hackney began to dominate.

They seem to have unearthed a gem of a player in debutant Alessandro Puerini. He has something of the air of Dimitar Berbatov about him. A mercurial presence. Talented and temperamental.

On 25 minutes the ball bounced into the Clapton box. Puerini caught the ball sweetly on the half volley. It arrowed into the far corner of the net.

He celebrated ostentatiously. The Clapton fans had to clap.

The Parrots doubled their lead with Puerini turned provider. He threaded through 19-year-old Ritchie Paletta, who slid it past Anfossy.

Signings of the times

In the second half, the fans got to see a trio of confirmed new Tons: Billy Wise, Fama Sangare and Bilal Hussain. All three gave Hackney new things to worry about with positive forward play.

Ocran also subbed himself on and quickly made a difference. He burst into the box and nudged it past the keeper’s outstretched arm, which then sent him tumbling. Panescu stepped up and drilled the penalty into the bottom corner with aplomb.

Despite a spell of late Clapton pressure, the visitors held out for the win.

Hackney have every right to be delighted with the result and performance, especially as this was their first game of pre-season.

But Ocran can be happy that there was so little between the two teams, with some good individual performances and with the stronger second half showing.

He also knows there are some big guns to come back into the side to add some of the firepower that was lacking in this game.

In spite of the result, Ocran found plenty to take from the performance:

We started quite sluggish again similar to the Lopes Tavares game and gave the ball away too cheaply which is never ideal in that heat. Second half we decided to engage them higher up the pitch and try to get in behind them, which worked more effectively. Lots of positives to take from the second half especially the two young wingers [Fama Sangare and Bilal Hussain] who came on and Bogdan who was linking up with them very well.

For our first pre-season game of the season I couldn’t have been more pleased. It gave me a great opportunity for me to look at trialists and new players. All 18 players got at least 30 minutes of game time which was also really pleasing. Looking forward to the rest of pre-season and the start of the season we’ll have five first team players arriving back from holiday next Saturday. If the young lads and new players keep on improving, I am hopeful that we get off to a good start, which is so important in the Premier League.