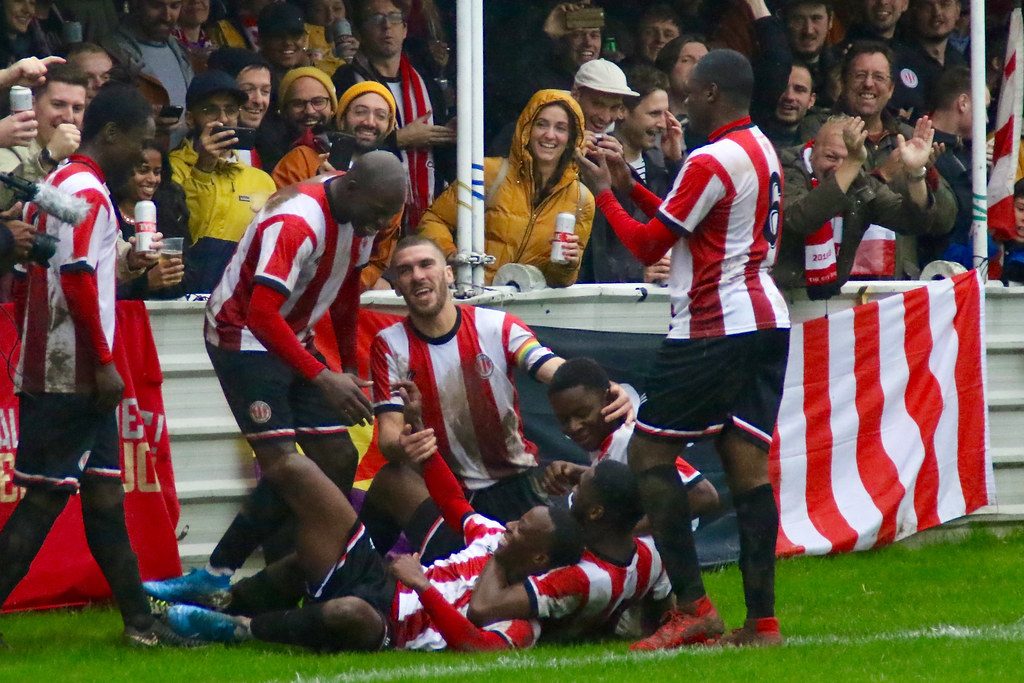 This was monumental. Clapton’s men’s team have struggled to find their feet in the MCFL Premier, failing to win four on the road after an opening night victory over Sporting Hackney.

Back at the Wadham Lodge Stadium, the Tons harnessed the energy of a raucous Non-League Day crowd of 909 to roar back from 2-0 down to Stonewall and take full points.

It was a strong-looking Clapton lineup. Talisman Eliot Crosbie led the line, flanked by Josh Adejokun and the returning Lewis Owiredu.

In the early stages, Owiredu had a couple of chances in the box. The first was smothered by Stonewall keeper Dennis Aware. The second was popped over the bar. But the tricky forward was clearly up for this one.

Then, another probing Tons through-ball. Aware rushed out of his box and took out Paul Oshin just outside the box. A booking for the goalie but the free kick came to nothing.

It was shaping up as an open, end-to-end game. With lots of big muddy slide tackles.

On 12 minutes, Stonewall’s Nasar Nakhli jinked in from the left, beating one, then two. He tried to flick in from an acute angle, but Jordan Odofin lunged to turn behind.

Before the game, the fans had unveiled a ‘One Love’ display, but it was Stonewall who took a one-love lead.

On 17, Stonewall captain Jehneil Lemonious squeezed it through to Nakhli. Clapton defender Dean Bouho, moonlighting as (the most biased) linesman (in the history of football) put his flag up. Nakhli stuck the ball past Jack Francis. Deano continued to flag frantically. The ref ignored him. Nakhli did a Cristiano Ronaldo-style goal celebration. Sorry Nasar, but we don’t want to see that kind of thing.

25 in, Crosbie tried to chip the fond-of-rushing-out Stonewall keeper and had another snapshot from just inside the box as the Tons strived to pull themselves level.

But it was the visitors who struck next. And in some style. From a ball from the right, Lemonius scissor-kicked low past a rooted Francis.

It was that rare kind of goal that leaves the opposition fans no choice but applaud. Even the Proper Football Men in the crowd, who usually only enjoy punts and injuries, had to begrudgingly accept its brilliance.

It looked like the Tons were set for another traumatic afternoon, after the defeats to Indian Gymkhana and Cricklewood Wanderers. But their belief never flagged.

Prince Kwakye, the midfielder who has shone even amidst a couple of the poorer performances this term, snatched at a fumbled ball in the Stonewall box to fire home. Deficit halved.

Tons tails up, Oshin burst in from right. He squared all the way to back post where Owiredu was faced with a completely open goal. He then seemed to side-foot it high and wide of back where it had come from, only for it to drop into the sidenetting. A freak goal. A freaquiliser.

A whole game’s worth of drama packed into an epic first half.

The Clapton defence seemed to get to grips with the Stonewall threat in the second period. When called upon, Francis wasn’t letting anything else past. That gave CCFC the platform from which to snaffle some more goals.

On 65 minutes Owiredu danced around the goalkeeper and slid it across the boggy six-yard box. It just evaded the desperately retreating defender to nestle in the bottom corner. 3-2. Clapton in the lead for the first time.

They extended their advantage when Stonewall were penalised for roughhousing Crosbie in the box. If only there were some kind of expression for a very obvious penalty that could go here. Oh well.

Owiredu stepped up and fired the spotkick home for his hat-trick.

Lewis loves playing Stonewall. He played a starring role in February’s 5-1 victory at the the Stray Dog.

Ten minutes from the end, a ball from the right snuck through to Crosbie. He toed it away from a defender right into top bins.

The fans were treated to the Crosbie chest beating celebration – one of the most powerful sights in nature.

With the last kick of the ball Crosbie tried his own overhead kick. It flew over, but was well worth the effort. The scenes would have been unreal.

At full time, there was a special extra celebration. After the usual sing-songs, the Tons players took a run up and did a big mudslide towards the fans.

Aside from the result on the pitch, it was a successful day for the club. There was relentless singing, drumming and dancing in the stands. And the t-shirt making activity with members of Hackney-based Akwaaba was a massive hit.

Wish it could be Non-League Day every day? For Clapton’s members, it is.

There was only ever going to be one winner…