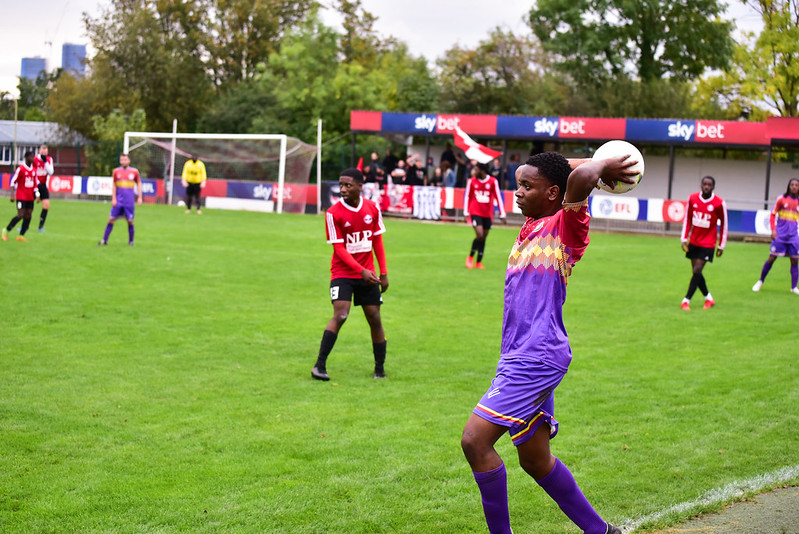 La manita. ‘The little hand.’ The Spanish term for a five-nil drubbing, each finger representing a goal.

And you have to hand it to Cricklewood Wanderers, who put five past Geoff Ocran’s men on Saturday. But the Tons really made a fist of it.

Aaron Yfeko and Noah Adejokun, the subs who had perked up Clapton’s performance against Indian Gymkhana the previous week, played from the start.

The first chance actually came for the visitors. The returning Stefan Nielsen drifted the ball across the box. It fell to Bilal Hussain, who drew a spectacular one-handed save from Cricklewood goalie Kevin Appiah.

But after 12 minutes, the Wembley-based side took the lead. A corner was nicely volleyed in on the turn by Kacper Strzala.

Then Wanderers’ Kyron Mitchell jinked in from the right and fired at the near post. Jack Francis was alert enough to palm behind. Shortly afterwards Nick Loblack made a good diving block to deny Tarim Mahmoud. This fleet-footed Cricklewood side were terrorising the Tons down both flanks.

The red-shirted home team struck another blow just before half time. Their right winger showed off some more jinking play and whipped it across the face of the goal. Idries Turay easily tapped in for 2-0.

Clapton nearly got on the scoresheet when Bruno Pereira prodded a Nielsen freekick goalwards from eight yards. There was no power on it, but the unsighted keeper only just got down in time to prevent it creeping into the corner.

Ocran brought on Josh Adejokun and Prince Kwakye for the second half. For the first few minutes it looked like it might shift the balance of the tie. Clapton played with a higher tempo and forced a couple of chances. Stefan Kilron put in a nice cross for Josh, who headed just over.

That sign of promise made the next goal even more devastating. The electric Mahmoud ran down the right and rocketed it into the far corner. Game well and truly over.

Substitute Charlie Fagan did have one headed chance from a Liam Smyth corner. But the Tons were mostly just hanging on for dear life.

The Wanderers bagged their fourth when sub Jess Yanga slotted home a cutback from the left.

The Cricklewood bench were urging their team on, knowing they could do more damage to the demoralised Tons. Towards the end, Yanga turned provider.

He crossed to Glody Kiyombo, who rifled in at the near post. Super finish.

That was the manita completer.

The Tons must now regroup for their big Non-League Day clash with Stonewall FC back at the Wadham Lodge Ground. They will be hoping for home comforts after some trying times out on the road.