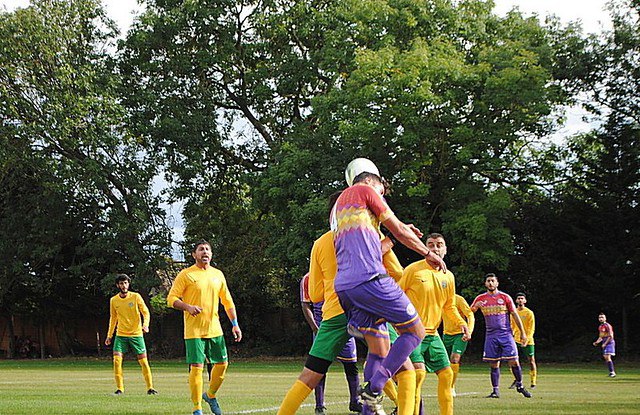 On Saturday, the men’s team travelled out to the historic Indian Gymkhana Club in Osterley. The clubhouse was beautiful. The food was delicious. Clapton’s performance was…

With a raft of first team players unavailable, Geoff Ocran had to call on some of the reserves who had dug him out of a few holes last season.

The Clapton fans had rigged up a pitchside wheelie bin as a makeshift drum. Which was fitting, as their team’s first half performance was (by the players’ own admission) rubbish.

From the start, the visitors’ backline was being sliced to ribbons.

Dangerous Gymkhana striker Edward Simon prodded one just past the post on three minutes. Then there was a melee in the box in which Clapton somehow managed to avoid conceding. Next Parwinder Kang raced down the right touchline and fizzed in a dangerous ball. Simon blazed it over. He would not be so profligate later on…

Coming up to the half hour mark, Clapton managed to squeak in front. A swirling free kick by Marlinho somehow squeezed under the Gymkhana keeper.

But it didn’t last long.

Straight away the hosts managed to break down the left and fire across the goal. An unfortunate, backtracking Cemal Agdelen inadvertently shinned it into the net for the equaliser.

Then on 33, Simon got through on goal and slotted under Dan Anfossy. He started doing a shhhhhh gesture to the Clapton support, but lost his nerve halfway through having recognised that they had absolutely no ill feeling towards him at all. Shhhhhh gesture misplaced.

The wind had been blowing Gymkhana’s way. To get to the break only 2-1 would have given Clapton a good chance. But then Simon capitalised on a defensive mix up to make it 3-1. Oh well.

This traumatic half brought back memories of last season’s away tonkings at the hands of Samurai and Stonewall. The only positive to take was that the latter of those defeats was the springboard from which the Tons went on to win the league. This time, the response was immediate.

For the second half, Ocran brought on trickster Noah Adejokun and powerhouse Aaron Yfeko. These two players brought Clapton back from the dead.

But Gymkhana still opened up with a killer goal almost directly from kick off. Simon hattrick. 4-1.

On 65 Adejokun went round the too-far-out-of-his-goal Gymkhana keeper to fire one and pull one back.

Then Yfeko smashed a free kick off the bar and Adejokun headed in the rebound. 5-3. The first sign that the home side might be losing control somewhat.

Coming into the closing stages, Clapton earned an indirect free kick in the box. In spite of the outrageous encroachment of Gymkhana number 4 Bobby Dhallwal, Yfeko rifled the lay-off into the bottom corner.

The Clapton fans continued to fervently bash away at their improvised bin-mounted percussion set. The wind was literally and metaphorically blowing eastwards. But Gymkhana managed to stifle any potential injury time threats.

Overall, it was an undeniably deserved win for the Osterley men. Clapton will look to bounce back next weekend when they continue their West London tour with a trip to Cricklewood Wanderers.

The thoughts of the management and second half substitute Charlie Fagan.

The impactful second half subs were joint winners of our poll.