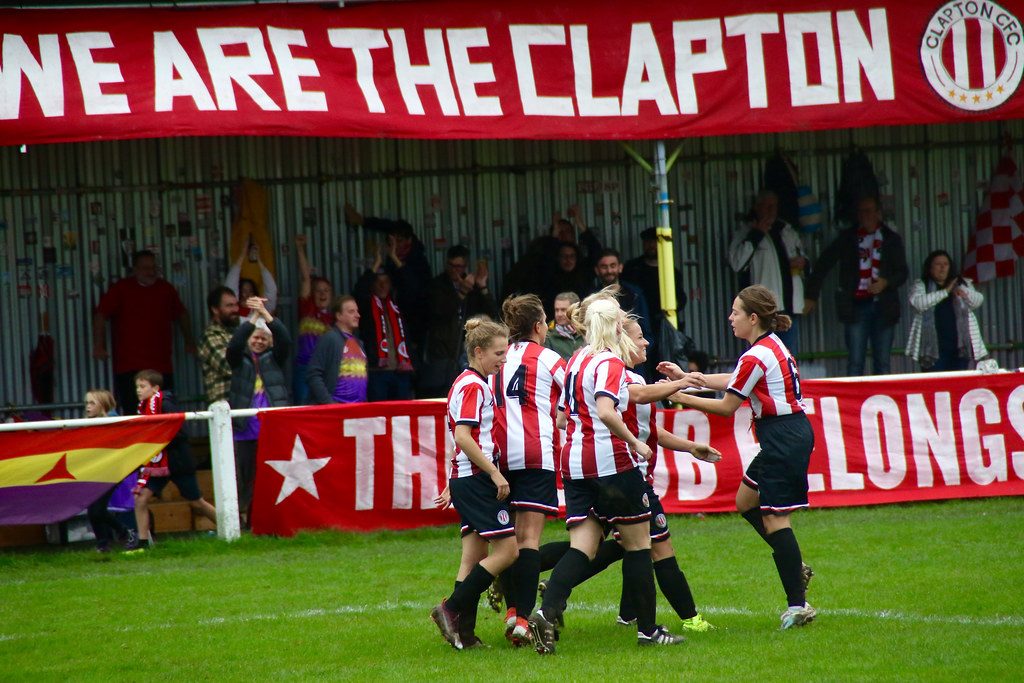 Fans of symmetry will be very satisfied with Clapton women’s 5-2 home win over Comets on Sunday.

A day after the men saw off Stonewall by the very same scoreline, the Tons made fairly straightforward work of their celestial opponents on a similarly cratered surface.

Comets might have had a couple of fresh faces for the match, as their coach was overhead introducing some of his players to each other during the warm up.

Clapton, reeling from two defeats on the spin, were still without Emily Link as well as first choice ‘keeper Polly Adams and recent emigre Ana Holmes.

If the support from the stand could be accused of being bit groggy, the Clapton team were anything but.

There were a few early exchanges between the sides in the opening ten minutes before Clapton found their shape.

Ciara Monahan, from central midfield, fed Naomi Scriven on the right, who duly left her defender for dust, cut inside and icily finished into the far bottom corner.

A brilliant individual goal from Scriven to put Clapton 1 – 0 ahead.

Despite having a large share of the territory prior to the opening goal, Clapton seemed to naturally gravitate backwards after scoring. Comets gladly accepted the invitation to attack.

A swift move forward yielded the visitor’s first real chance – a ball into the box was initially met by Tons’ goalkeeper Sophia Axelsson, who could only knock the ball into the path of the oncoming attacker.

Stranded, a couple of yards from her line, Axelsson was well covered by her defenders who cleared a scrambled effort from the Comets’ attacker.

The near miss seemed to re-sharpen Clapton’s attacking instincts.

More good work along the right hand side from Scriven found Saskia Walker in space on the six yard line, who swiveled and shot wide. The heavy pitch probably upped the difficulty level of the chance, but she’ll be disappointed not to have scored.

Zhane Amoaten was the next to worry the Comets’ goal – following a good corner, Amoaten powered in a towering header.

Either side of the goalkeeper’s strong palm and the Midfield General would’ve celebrated her third strike of the season.

Clapton continued to orbit the Comets’ penalty area and after another Scriven-led attack, the winger was both pushed and tripped in the box within the same movement.

The referee, who was behind the play, initially signalled “no penalty”, but was corrected by a furious assistant ref; who was seemingly as annoyed by insistent calls from supporters and their ignorance of lino-flag semiology.

Captain Monahan took responsibility for the pen – She stepped up and smashed the ball right down the middle. The force taking it through the impacted goalie, whose hands were probably still stinging from Amoaten’s recent effort.

Despite the weather, both teams elected to stay on the pitch during the break, while guests for the day, Hackney Laces entertained with a penalty shootout.

Clapton transferred the pressure they had at the end of the first half and applied it directly to the second. Not long after the restart, the Tons were up the field again.

Laura Wright hit a long range, low travelling shot along the ground, which crept past a number of limbs, into the bottom right hand corner.

It was fullback Wright’s second goal in a Clapton shirt, with the home side radiating confidence in all departments.

Amoaten, arguably due a goal, swiftly emulated Wright with her own long-ranger – a 20 yard hit and Clapton appeared to be out of sight at 4 – 0.

Tactical changes for both sides took the game on a different course. Comets, with a deficit to chase, aligned behind four forwards and the whole team looked to take a few steps forward.

Perhaps unfortunate to be four goals down, the away side soon pulled a goal back – good work along the right and a tidy ball inside brought about the visitors first firm attack of the second half.

Riding a robust challenge from the Clapton defender, another potential penalty call ducked by the referee, the ball spilled favourably for the Comets attacker. Axelsson couldn’t stop the ball smashed at her from close range.

Just as quickly as Clapton had pulled away with two second half goals, Comets had dragged them back.

Axelsson, being encouraged from the sidelines by Clapton men’s ‘keeper, Jack Francis, could do little to stop Comets’ second – a wonderful hit from 25 yards, which travelled on a clear trajectory, right into the top right hand corner.

With Wright forced off with a bad looking injury and Verity Phillips dragged into an unnatural fullback position, Comets began to push very high up the pitch.

Chasing down every ball, the light blues sensed Clapton were rocking slightly. A third goal in quick succession would have certainly switched the game’s momentum.

The Tons were soon forced to clear the ball off the line again, after another effort from outside the box required a fine initial save from Axelsson.

Eventually Clapton regained a foothold and started to exploit the space left by their attack-attack-attack-minded opponents.

Another Monahan set-piece forced a goalmouth scramble which the ever sharp, Scriven exploited to tap in at close range.

A deserved second for Scriven takes her season total to four goals from five games.

Clapton saw out the last phase of the match in relative comfort with their three goal advantage restored.

After two reverses in the FA Cup and league, a comprehensive win against a good side could prove to be a hugely important win at this stage of the season.

The thoughts of Naomi Scriven, Verity Phillips and Lucy Spours.