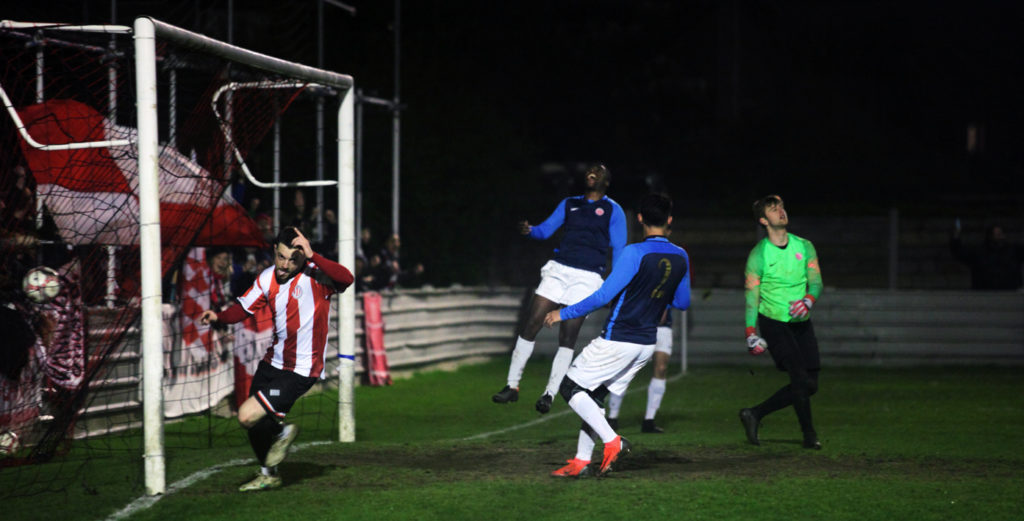 It was a big evening in North East London as fans of a historic club got to experience the unfamiliar surroundings of a bigger stadium next door.

And as the expectant hordes crammed onto the Victoria Line, they realised Spurs were opening their new ground on the very same night.

The match at the Wadham Lodge Ground featured two teams still in the race for the title. But Clapton and NW London knew that only three points would be sufficient to keep up the pressure on their rivals.

Ultimately, both teams were so desperate to win that neither side could.

The Tons were still without the injured Yacine Rabia, but there was a welcome return for right back Romelle Pile.

NW London showed their quality from the off, defying the bobbly surface to play some slick, attractive football.

But Clapton’s high press and direct counter-attacking was causing the Acton-based side problems.

The NW defence failed to deal with a Stefan Nielsen free kick into the area. It fell to Sherwin Stanley, who bashed it in from close range.

Dan Anfossy made a couple of top stops at the other end to keep the Tons in front.

Nielsen attempted a chip that nestled perfectly in the stanchion, but the outside of it.

The Tons were firmly in control.

Nielsen had an even better chance. But he couldn’t catch a volley from near the penalty spot cleanly and NW keeper Cole Colbert saved.

On 20 minutes, Eliot Crosbie tried to play Josh Adejokun through on goal.

It looked to have been overhit, but Colbert misjudged the bounce, allowing the Tons winger to nip in behind. Adejokun tried to stoke it home from a tight angle, but the ball trundled to a halt in the goalline mud.

Clapton have played a lot of games on 3G recently. If this had been 3G it would have slid in for 2-0.

But CCFC did soon manage to double their advantage. Stanley was played through, held off his defender and calmly slotted past Colbert.

As with in the previous weekend’s wild 6-4 win over Eastfield, the Tons couldn’t shut down the game after building a lead.

Straight from the restart, NW went up the pitch and scored a very similar goal to take it back to 2-1. Demi Ogun broke through and fired into the bottom right corner.

A couple of minutes later, Clapton’s advantage evaporated. A NW free-kick on the edge of the area was hit central, but with lots of movement on it. Anfossy could only parry to Argentinian teenager Ezequiel Franchi, who finished easily.

Then, a spot of controversy.

Livewire Franchi jinked into the box from the left and fired towards the bottom corner. Anfossy saved. NW players thought the ball had crossed the line.

Just after that, the Gorillas has a goal chalked off for offside too.

A quick exchange of goals

Clapton continued to threaten on the break.

Towards the end of the first half, central midfielder Cemal Agdelen quarterbacked a beautiful ball out to Adejokun. The winger’s shot was saved, but Jake Stevens rushed in to volley Clapton back into the lead.

Again, it only lasted a minute. Franchi squeezed a shot under Anfossy from a narrow angle. 3-3.

Shortly afterwards the Clapton fans were up in arms. A long ball towards Jake Stevens clearly hit a NW defender on the hand. And not accidental, but ball to hand. The ref and his assistant were having none of it.

The first big chunk of the second half didn’t throw up so many chances, just lots of fouls and stoppages.

Then, on 65 minutes, NW got their noses in front again. Dante Cobianchi, who grabbed the winner in the reverse fixture, dashed onto a through ball from a free kick. Their top scorer this season rounded Anfossy and popped it in. 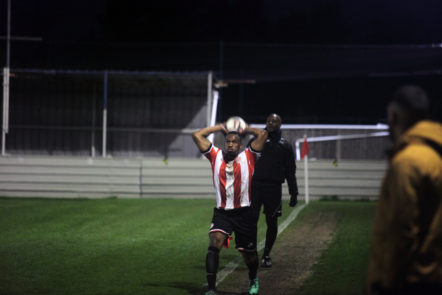 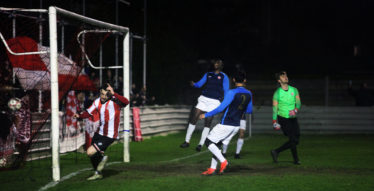 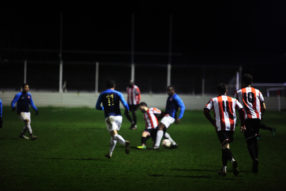 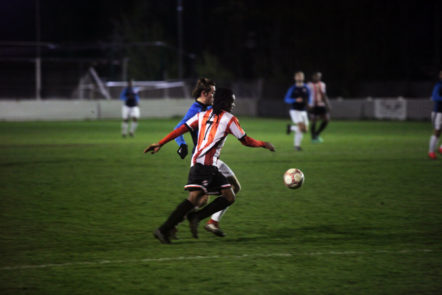 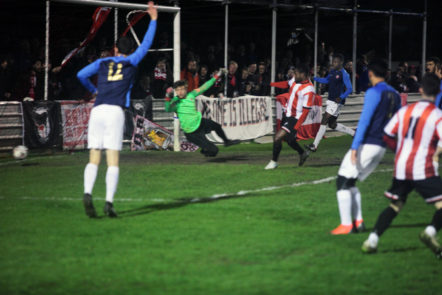 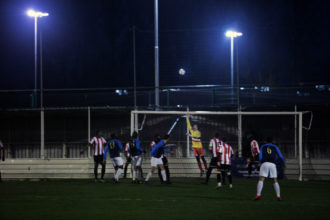 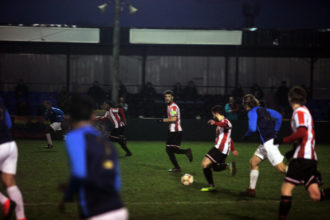 Staring a rare defeat in the face, Clapton started to show more urgency to get forward.

Stanley nodded one Nielsen free kick towards the bottom corner. But he couldn’t get much purchase on it and Colbert gathered.

Apart from one mad goal-line scramble, NW didn’t get too close to extending their lead.

With the Tons pressure mounting, Stanley proved his value as a creator not just a finisher.

The striker fired a missile of a long throw into the heart of the NW box. It pinged around a few Clapton players. Adejokun had a shot saved before cult legend in-the-making Dean Bouho tucked away the rebound.

It was the defender’s third – and most dramatic – goal for CCFC to date.

There were a couple of late chances for the home side to seal a remarkable comeback.

The NW keeper rushed out to cut off an advancing Adejokun. The ball broke to sub Lewis Owiredu who tried to curl it into the unguarded net. But it whizzed agonisingly wide of the post.

Then Stanley scuffed a shot while through on goal.

Had either of those found the back of the net, it would have blown the corrugated roof right off the stand.

But the referee blew for full time and the two teams had to settle for a point.

NW felt they should have won. They lost a late lead and played the better football.

Clapton felt they should have won. They lost an early lead and had the better chances.

In the end, both teams will be disappointed.

But in some other parts of London, Stonewall and Samurai will have been celebrating their two major rivals cancelling each other out.

Ocran’s equivalent on the NW bench, Wasim Khan, also had mixed emotions on the high-scoring draw:

I thought we executed a fantastic performance and it’s tough to concede in the last minute. If you look at the number of clear chances, I feel like we were the stronger team from the first minute. Clapton are a strong team with a lot of pace and once we adjusted to their counter-attacks in the first half, we really should have killed the game off in the second half. Our passing through the lines was back to our normal level and we matched that with really good attacking movement.

The performance overall was excellent and a great game for the fans. We’re obviously disappointed in terms of our league ambitions but we still have one more game. There is a mathematical chance we can still win the League, so we will fight until the last minute to win it.

Another two goals and another man-of-the-match award for Sherwin Stanley.

Man of the match poll for last night