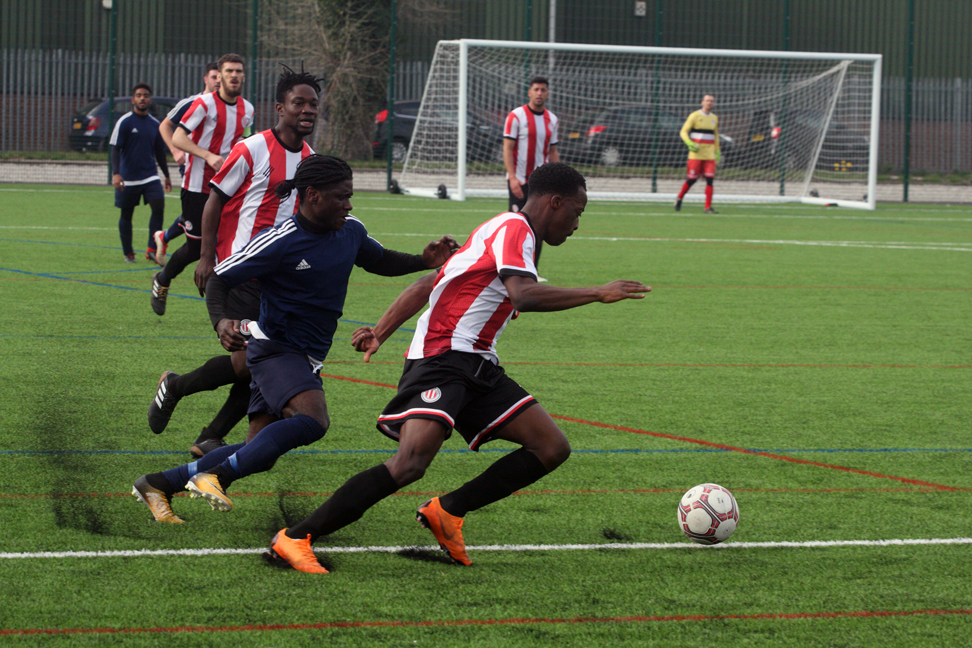 Clapton came from behind, raced into a massive lead, almost threw that lead away, then restored a comfortable lead in 90 chaotic minutes in Leyton.

At times, it felt more like a basketball game (but enjoyable). In the end, Sherwin Stanley’s three goals, assist and all round menace got the better of battling Eastfield FC.

Cemal Agdelen came into central midfield for Geoff Ocran and Andrew Lastic returned at right back for this game on the Ive Farm 3G pitch.

The home side took a quick lead with an undeniable worldie. Number 11 Alex Gheorghe turned on the edge of the box and half-volleyed over a helpless Dan Anfossy.

It would have been strange if this were time-wasting at this early stage. But as we later found out, Vasilev has interesting ideas about what is appropriate to do at certain times of a game of football.

Having come back from behind in last weekend’s cup win over Ware Sports, the Tons remained calm and stuck to their game plan.

They were rewarded after 25 minutes. The assistant referee awarded Clapton a throw-in near the corner flag. Eastfield made the classic error of getting distracted by complaining about a throw-in award. In the meantime, Clapton took it quickly and Stefan Nielsen popped it into the box for Stanley to nod home an equaliser.

But this young Eastfield were a constant threat on the break. They had tasty attackers, who could both nip in behind the CCFC backline and hold the ball up well.

As Ocran explained after the match, Eastfield’s cavalier approach left spaces at the back but made them extremely hard to predict. It was an altogether different challenge to the highly-organised approaches of rivals like Samurai and Stonewall.

Possibly as a result of his earlier injury, Vasilev kicked out poorly to present Nielsen with a lobbing opportunity. He clipped it just wide of the right hand post.

On 25 minutes, the Tons took the lead. Left back Liam Smyth floated one in from the left. Eliot Crosbie pulled off a stunning flicked lay off for Jake Stevens to slot into the corner. Incredible awareness and technique. Assist of the season, hands down.

Just before halftime, Clapton bought themselves a cushion (something you usually do at Westfield rather than Eastfield).

Stanley received an innocuous ball inside the penalty area, quickly turned and pinged it goalwards. A big deflection meant Vasilev had no chance.

Game over. The second half was bound to be a stroll in the park. No more drama.

At half time, one Clapton fan strayed into the Eastfield dressing room thinking it was the toilet and overheard: ‘You’re a central defender…why are you letting a striker bully you?!’ That summed up the home side’s problems quite well.

Just four minutes into the second period and the Eastfield defence were letting themselves be bullied by Stanley again.

Josh Adejokun drove in from the right and played it in to the in form striker. Stanley strongly held off his man before threading back through to Adejokun, who fired home off the base of the far post. 4-1.

On 56 minutes, Eastfield tried an opportunistic lob that caught Anfossy by surprise. It bounced off the top of the bar and over for a goal kick. 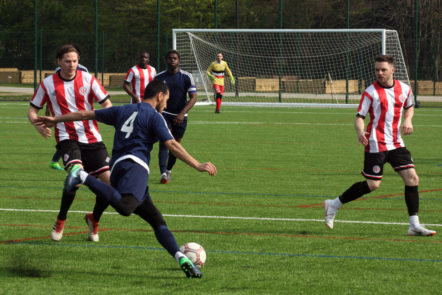 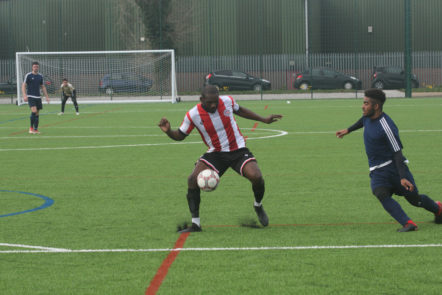 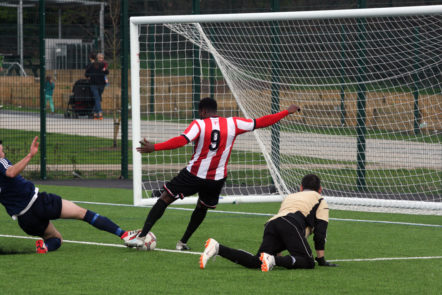 Clapton then went up the other end and scored a fifth.

The Eastfield backline tried to play Stanley offside as the ball came over the top. The assistant referee didn’t flag. The keeper tried to make a tackle. He couldn’t. Stanley held on to the ball until just the right moment to chip it past the scrambling defenders into the net.

That had to be game over now surely. Surely?

So thought everyone bar this tenacious Eastfield side.

The hosts grabbed a goal back almost straight away. Number eight Gilberto Nguema was played through on goal. Anfossy came out to narrow the angle but Nguema cooly feinted past him and converted.

Then, something you never see. Eastfield goalie Vasilev came up for a corner. At 5-2 down. With almost half an hour left to play. Why???

He wasn’t able to do anything, but nor were Clapton able to capitalise on the goal he had left unguarded.

On 71 minutes, Eastfield got another one back. Nguema’s shot from a narrow angle hit Yacine Rabia, who was standing at the near post. The Tons defender couldn’t deflect it around the post.

Moments later, disappointment turned to disbelief as impressive Eastfield striker Javid Irish broke through on goal again and made it 5-4.

At this point, there was only one side looking likely to add to their tally and it was the men in the dark blue generic Adidas tops. Clapton had to steady the ship fast.

It should be mentioned that this goal deluge coincided with Stanley being off the pitch. As Johan Cruyff said about his own tactical philosophy: ‘the striker is the first defender.’

Luckily for Ocran, in the MCFL, you can bring players you have subbed off back on again.

The Tons manager reintroduced his talisman. He also brought on spritely winger Lewis Owiredu, who immediately provided a useful outlet down the left.

On one foray to the byline, he cut it back to Stevens on the edge of the six yard box, who then set up Crosbie for a shot. The captain side-footed over the bar.

Then, a golden chance for Eastfield to equalise. A ball squared from the right found an attacker alone in the penalty box. The low effort was palmed round the post by Anfossy.

Into the final ten, Clapton had a free kick in the middle of the Eastfield half. Crosbie floated it into the penalty box, where an unmarked Stanley was lurking.

Perhaps they had forgotten how good he is at football. Perhaps they didn’t want to get bullied again. Either way, the Clapton number nine casually nodded into the corner to make it 6-4.

There was still time for wonderfully eccentric goalie Vasilev to venture forward for another corner, but by this point it really was game over.

After an exhaustingly entertaining afternoon in the E10 sunshine, CCFC are still in hot pursuit of the league leaders.

Every game from now on is a cup final. Especially the two that are actually cup finals.

Hear the thoughts of Josh Adejokun, Eliot Crosbie, Geoff Ocran and Jake Stevens on the hard-won three points – plus a guest appearance from the Eastfield chairman.

Four goals and an assist. Not a bad day’s work Mr Stanley.

Yesterday’s man of the match