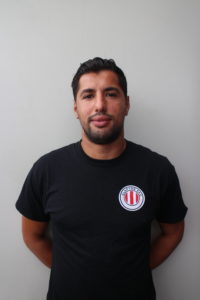 Q&A
Full Name: Yacine Rabia
Where you live: Leyton
Day job: Sports Development Officer
All time favourite player: the one and only Zinedine Zidane
Favourite team, apart from Clapton CFC: Chelsea FC
Biggest high in football: Winning the double with Clapton CFC
Lowest point in football: My West Green United manager passing away due to a serious illness was the lowest point for me.
Likes and hobbies:  My favourite thing to do are Clapton, playing/coaching football, going to the gym, cycling, snowboarding and spending time with family and friends.
Dislikes: Brexit, Boris Johnson and Donald Trump
Favourite country visited: My absolute favourite place in the whole world is stunning Croatia.
Favourite food: Italian cuisine
Favourite film: This might surprise a few but my favourite film is The Notebook
Favourite music: I like a verity of music genres from rap, pop to grime and classical music it depends what mood I’m in.
Favourite TV: My favourite tv show is Hunted on channel 4
Footballing ambition: I would like to coach a team at a major international football event.
Person you’d most like to meet: There are a few people id like to meet but right now I’d say someone inspirational like Nelson Mandela.