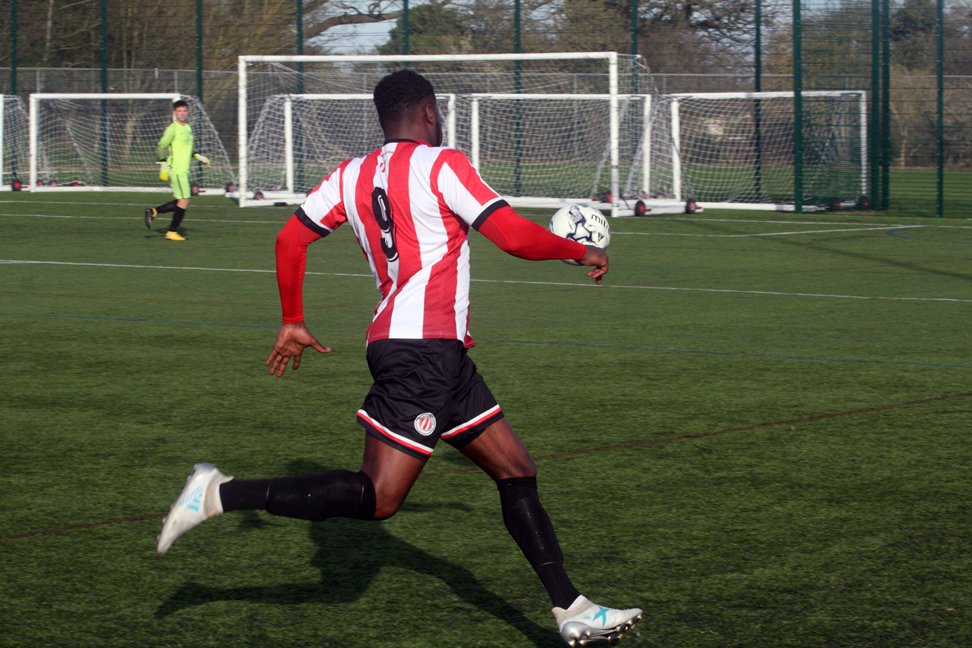 Clapton Community’s remarkable form continued as they dispatched Ware Sports in the semi-final of the Anagram Records Trophy.

The Tons didn’t let a missed penalty, niggly opponents or a card-happy ref derail them. A double from Sherwin Stanley and another from Jake Stevens got them over the line.

Today’s line-up in the Anagram Records Trophy. Kick off at @Waresportsfc 3pm. pic.twitter.com/AsrSvWJvm4

Yacine Rabia stepped in at the last minute to replace Andrew Lastic in the starting lineup. The return of Stanley saw Prince Kwakye drop to the bench in the only other change from the previous week’s league win over FC Star London.

It was surprising to see elements of the Premier League match day experience even at this level. And after the  stewards had ejected Clapton fans drinking alcohol from the official spectator area, things got started.

Clapton looked more threatening from the off, with Josh Adejokun in particular giving Ware grief down the right flank.

But the home side took the lead against the run of play. It was just a big punt up from Ware goalie Freddie Salmon that caused a chaos in the CCFC box. It broke to Mitchell Judge who drove it home.

There were a couple of frustrating decisions from the referee, who seemed to be tolerating Ware mischief, while clamping down on the slightest Clapton infraction.

But the Tons continued to play to their game plan.

As Geoff Ocran explained in his post-match interview, they had started off compact to see what the opposition had to offer, but even having conceded they worked out that they would be able to press higher up the pitch and force mistakes.

And chances came. Stefan Nielsen floated a free kick in from deep. Eliot Crosbie glided through the air to nod it towards the bottom corner, but it was palmed round the post by Salmon.

Next, Stefan Kilron took the ball down near the penalty spot and turned smartly. His shot was powerful but just over the bar.

Then, the equaliser that had been coming came. Adejokun flipped away from the Ware left back and picked out an onrushing Stanley with a pinpoint pass. The prolific striker couldn’t miss. 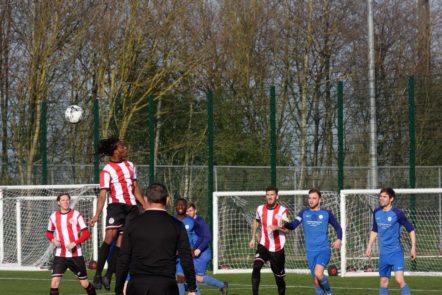 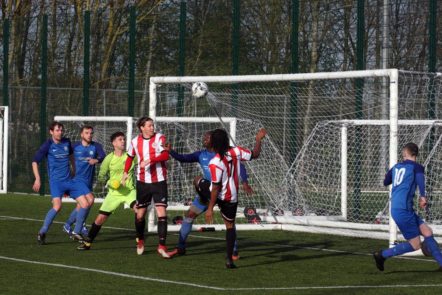 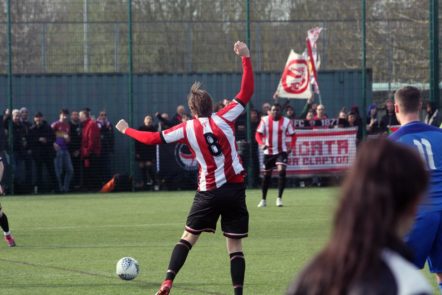 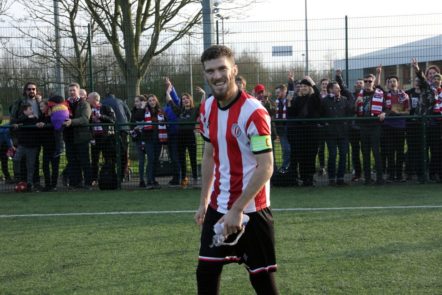 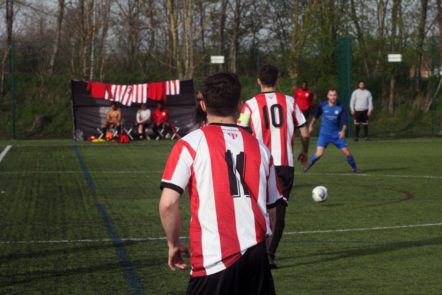 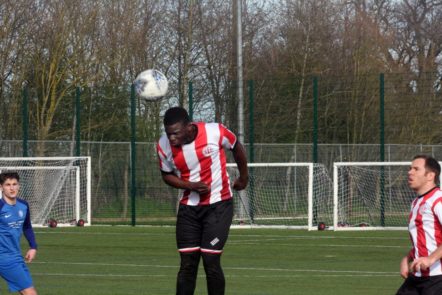 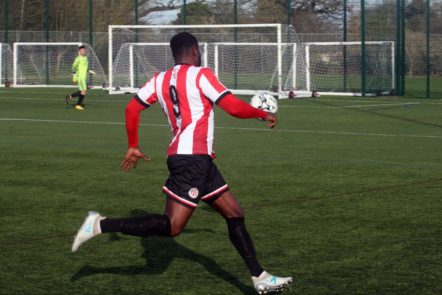 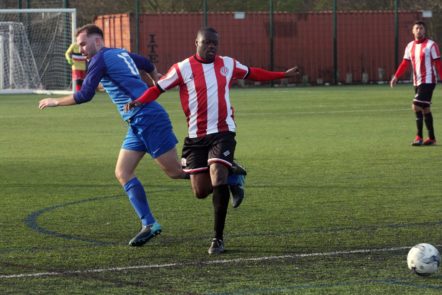 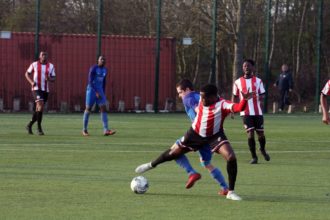 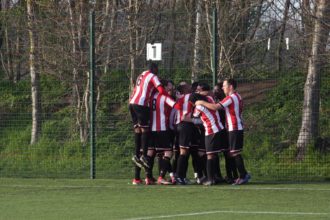 Just after the half hour mark, Clapton had a chance to further cash in on their superiority.

On the edge of the box, Stanley took down a high ball on his chest. He unleashed a half volley goalwards, which struck a luckless Ware centre back on the hand. Penalty.

Nielsen, who had buried a spot kick in the corner against FC Star London the previous week, put it straight down the middle this time. The Salmon leapt to his right, but did brilliantly to jut his hand back to save. His defenders did the rest by hustling the ball out of play.

It was not to be a missed opportunity that would come back to haunt the East Londoners.

Ten minutes into the second half, the Tons got their noses in front.

Stanley broke into a gulf of space that had opened up in the right channel. He fired it low across the box where Stevens was waiting to knock it in at the far post to make it 2-1.

While Ware’s goalie Freddie Salmon sounds from his name like he should be a 1930s footballer, it seems like he is more of a fan of Jordan Pickford. He was doing a lot of those fancy kick-outs where you cut your foot across the ball. He was doing a lot of being cocky to the crowd. But was also keeping the Hertfordshire side in the game with some fine saves.

A long Clapton throw came all the way through to Adejokun at the back post, who forced it goalwards with his knee. Salmon somehow managed to pluck it out of the air.

A chance at the other end. Rabia should have easily dealt with a hopeful Ware ball, but hesitated, allowing a home striker through on Dan Anfossy. But the player-coach made a terrific challenge to atone for his mistake.

His defensive partner Dean Bouho also pulled off a perfect thumping slide tackle on an advancing Ware winger, with absolutely no concern for 3G knee burns.

Fair play to the victim for managing to stand up afterwards.

While not under too much pressure, 2-1 was still a precarious score for the visitors.

Approaching injury time, Stanley scored a Sherwin Special™ to all but book the Tons place in the final.

This time, Stevens turned provider. His throughball tempted Salmon to rush out and clear. Big mistake. Stanley nipped in to flick it over him.

The Clapton fans enjoyed that unmatchable beauty of a lobbed goal: the couple of seconds where everyone can see the ball is going into the net before it actually has.

Ware’s young goalie would have done well to have done his homework on what Stanley does when keepers recklessly rush out. Like his goal against Letchworth Garden City Eagles in this very competition, for instance.

Ware showed a bit of fight in the dying minutes. They grazed a free kick off the bar from out wide. But at 3-1 to the London side. the tie was already finished.

Ware became the third Herts Senior County Premier League side defeated on the Tons’ march to the Anagram final. That’s a step above Clapton. The aggregate score for those three matches is 8-1, with Stanley netting six times.

The opposition in the final will be either Middlesex County Football League Premier side PFC Victoria London or the holders, Essex Olympian Premier‘s Catholic United.

The game will be played on May the fourth…and yes, all the Star Wars jokes have already been done.

Manager Ocran was joined by “Destroyer Deano”, double-Stefan and on-form Sherwin Stanley to look back at the victory.

We’re through to the Anagram Records Trophy final! Here are the management and players after our 3-1 win at Ware Sports FC

Proposal to be raised at next CCFC general meeting: all club funds to be spent on gigantic statue of Sherwin Stanley. Not like that one of Cristiano Ronaldo in Madeira Airport. A nice, tasteful one.