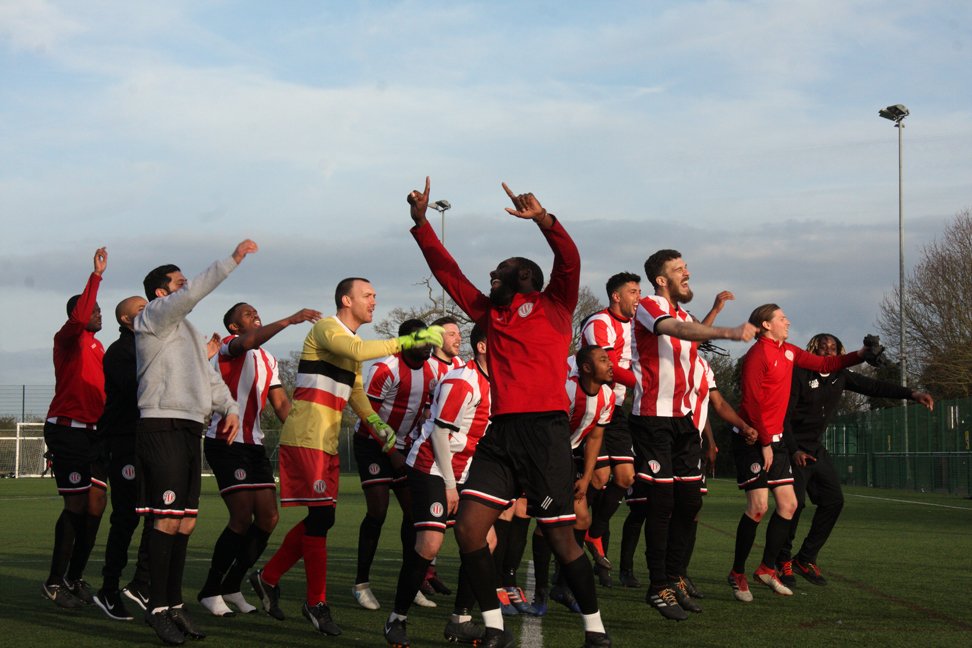 Clapton CFC are through to the final of the Anagram Records Trophy, aka the Capital Counties Feeder League Trophy.

It comes after wins against Epping Town at home (3-1), Letchworth Garden City Eagles away (2-0), Chipperfield Corinthians at home (3-0) and Ware Sports away (3-1).

It’s going to be another game against higher level opposition against Essex Olympian Premier side Catholic United, who are the current holders.

This year’s final will take place at Redbridge FC’s Oakside Stadium, on Saturday, May 4th at 1pm.

Here’s the full draw for the competition, the results, and some history.

PAST FINALS OF THE COMPETITION

History of the Anagram Records Trophy

The increase in ground and facilities standards for the Football Association Challenge Vase over recent years has resulted in a number of senior clubs no longer being able to enter the competition.

Lack of finance, planning obstructions or restrictions on ground development by landlords have meant that many clubs have found it impossible to meet the improvements.

One League with member clubs having had applications for entry rejected over the years is the Chiltonian Football League and, in 1996, the then Secretary of the League, Tony Ford, put together a case on behalf of the League for the introduction of an additional national competition below the Challenge Vase.

The proposal was submitted to The Football Association and considered by the Challenge Vase Sub-Committee. Unfortunately, the proposal was turned down.

These five Leagues, together with the three Feeder Leagues, founded a new Isthmian Lower Joint Liaison Committee under the chairmanship of Pat Burns, the chairman of the Spartan South Midlands League.

At the inaugural meeting in July 1998, the Hertfordshire Senior County League representatives raised the possibility of staging a competition for those senior clubs excluded from the Football Association Challenge Vase.

Several of their member clubs had found themselves no longer eligible, due to the increased ground requirements and missed the inter-League rivalry the competition provided.

The original proposals from 1996 were unearthed and circulated to the member Leagues and, with a few updates and amendments, were found to be acceptable being approved at the following meeting in April 1999.

It was agreed that the competition would start in the coming season, be restricted to those leagues within the Isthmian Pyramid and, following suggestions put forward by the various league representatives the title of the competition was resolved; the Capital Counties Feeder Leagues Trophy.

Entry forms were submitted to the clubs within the Chiltonian and Hertfordshire Senior County Leagues and, once the list of entrants to the Challenge Vase had been published by The Football Association, to all those clubs within the Combined Counties, Essex Senior, and Spartan South Midlands Leagues who had not been accepted or who had not entered the Challenge Vase.

Entry forms were also sent to any club that had been relegated from a qualifying League or division at the end of the previous season to widen the scope slightly and ensure a reasonable inaugural competition.

Eventually, it was estimated that some fifty-eight clubs were eligible to enter the competition, forty clubs finally made application and all were accepted. Sanction from The Football Association was duly received and the competition was underway.

Most rewarding was a proposal for sponsorship received from Iain McNay, the Managing Director of Cherry Red Records Limited, who wished to add the competition to his stable of football sponsorships.

The proposal was accepted by the Committee and approved by The Football Association, the competition was re-titled the Cherry Red Books Trophy with the winners receiving £200, runners-up £100 and the two losing semi finalists £50 each.

In addition, a sponsor’s advertisement was required to be published in the match day programme issued by each club for the competition matches.

The 2005/06 season saw the competition re-titled again. It is now known as the Anagram Records Trophy but still sponsored by Cherry Red Records Limited.