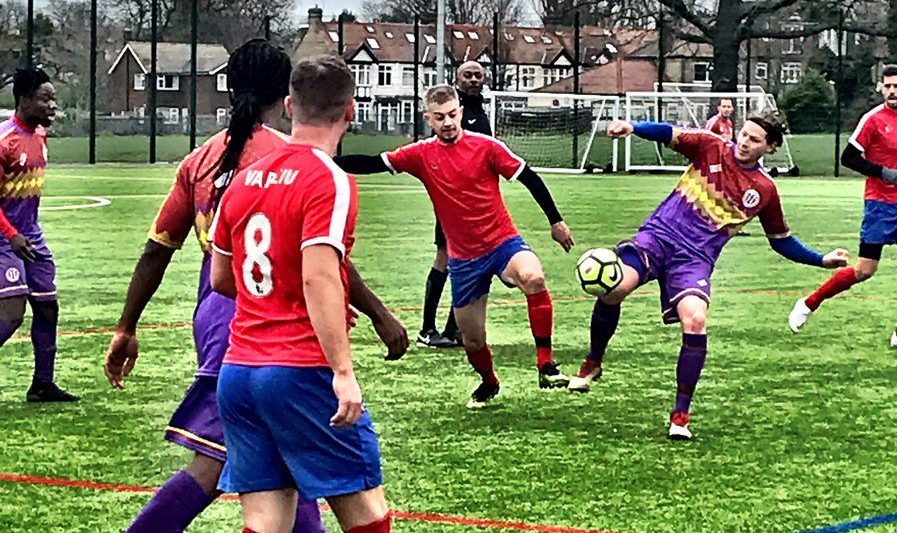 As seems to be the case every time the Tons have played this year, it was blowing a gale.

The ball was flying all over the place in a highly unpredictable manner. Most corners just flew directly out of play. None of the dead balls were actually dead, as they would start rolling as soon as they were placed.

If goal kicks are the best way to gauge the effect of wind on a football match, it should be noted that in the first half Clapton’s were only travelling half as far as FC Star’s.

While Dan Anfossy’s efforts were stalling and curling back on themselves, some of the home side’s were technically shots on target.

Remember the wind. It will be making a reappearance in this match report.

Clapton were looking for revenge on a Star side that had won convincingly at the Stray Dog back in January.

They could not call upon leading goalscorer Sherwin Stanley, but otherwise it was a strong starting lineup.

The early stages were end-to-end, but with neither side able to carve out a clear-cut chance.

The first bit of noteworthy action came when a Star winger crossed back in from about a foot over the touchline, but they were unable to finish the chance. A member of the home contingent, who was moonlighting as linesman, kept his flag down.

The Clapton bench exploded in anger. Assistant manager Stu Purcell shouted at the lino that the ball was about a foot over the line. He added some swear words. The lino replied in kind.

Remember the lino. He will be making a reappearance in this match report

On 20 minutes, Eliot Crosbie fired straight at the keeper after being played through.

Then FC Star had a very threatening period. The hairiest moment came when they had a succession of mad chances in front of goal, all of them frantically blocked.

25 minutes in, Star top scorer Cristinel Ilie broke through and tried a lob, but with it being impossible to gauge the correct weight on anything sent airborne, it sailed over.

On the half hour mark, Clapton took the lead against the run of play. Stefan Nielsen curled a free kick into the box. Prince Kwakwe had a snapshot that squirmed under goalie Ionut Florea. Josh Adejokun rushed in to apply the finishing touch. 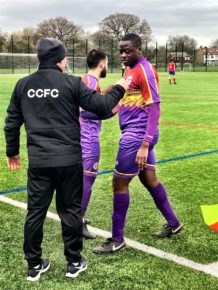 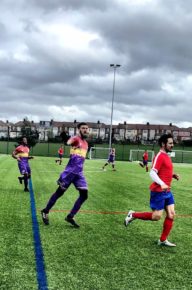 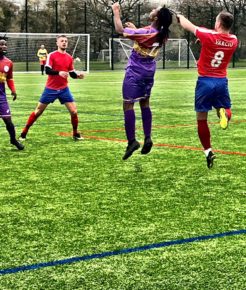 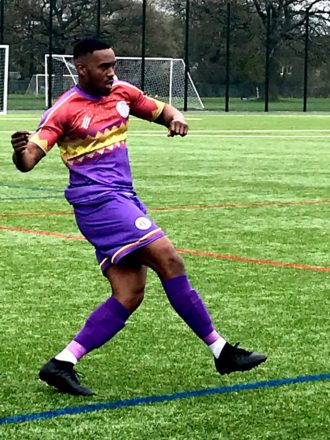 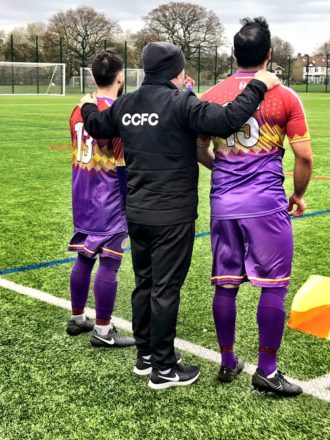 Right at the end of the first half. A massive moment in Clapton CFC’s debut season.

Adejokun cut the ball back across the area. Crosbie had a swipe at the ball, missed it, but was able to bundle it out to Geoff Ocran.

The Tons’ gaffer slotted it under Florea from close range. A defender managed to hook it clear, but it had clearly crossed the line. Cue ecstatic pile on.

After the referee blew up for half time, there was a bit of drama. A big Star defender walked over to his teammate running the line and squared up to him.

Whether this was connected to the award of the Clapton goal moments earlier or there is a long back story of beef that has been bubbling between the two for years we will never know. None of our business really.

Thankfully the combatants were separated and the whole situation was calmed down before it got too ugly.

At the start of the second half, FC Star finally managed to land a glove on their visitors (in a footballing sense, thankfully). They were awarded a spot kick when the otherwise flawless Dean Bouho knocked over his man from behind. It looked soft.

Catalin Molan thumped it into the bottom left corner. Anfossy went the right way but couldn’t get a hand to it.

On 65, Clapton managed to deliver a rare corner that didn’t just get blown straight out of play. It fell to an unmarked Crosbie at the back post, but he could only volley into the side netting.

Next, Adejokun broke down the left and cut back to Crosbie who brought a magnificent fingertip save out of Star goalie Florea.

Just past the 70 minute mark and Crosbie was at the centre of the action again. Shielding the ball, with his back to goal, in the corner of the box, going nowhere, the Star defender pointlessly pushed him over. Penalty.

After the ball was finally convinced to stay on the spot without rolling away, Nielsen confidently thwacked it into the bottom corner. Again the keeper guessed correctly but couldn’t get there in time. It was a perfect mirror image of Star’s penalty. 3-1 Tons.

The hosts had a chance to reduce the deficit, but the unmarked  Florin Flore headed over when he probably should have scored.

The last chance of the match fell to CCFC sub Sham Darr. For some reason he found himself in an unfamiliar attacking position. He turned his man well, but shot straight at the keeper.

In the end, it was another businesslike job from the Tons. Where their opponents got angry, they kept their cool.

It is a mark of the progress of this team that they have not needed to rely on goalkeeping heroics from Anfossy so much of late. Game management has significantly improved.

And the celebrations in the dressing room afterwards showed what it meant to the players for their boss to get his first goal.

Well done to the @ClaptonCFC gaffer @Mr_Ocran for scoring his first goal today ! Scenes in the dressing room ! Thanks to all the fans that came today again ! We go again Saturday ! pic.twitter.com/XZeNxayf5L

Crucially, this win takes Clapton up to fourth in the table and keeps hopes of a late promotion push alive.

Clapton’s star man was of course their star manager.

Man of the match poll