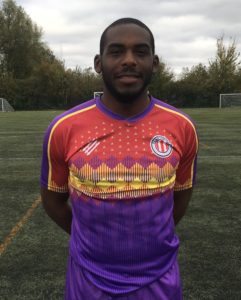 Full Name: Andrew-Justin Albert Lastic
Place of Birth: Newham General
Home: Seven Kings
Day job: Bus driver.
Favourite player: Mascherano/Zanetti/Paul Ince/Joe Cole/David Villa (Too difficult to choose one).
Favourite team, apart from CCFC: West Ham and Preston North End. My mother and her siblings are from there
Most memorable match played in: Playing as one of three forwards in youth game, and all three of us getting a brace.
Favourite ground played at: Olympic Park. Lovely surface.
Biggest high in football: Running though the whole field and scoring from centreback.
Lowest point in football: Having an infected toe that took the majority of a season to heal.
Likes and hobbies: Listening and playing music. Roller skating, driving.
Dislikes: Too many to mention. I can be a very grumpy old man sometimes
Favourite charity: Battersea Dogs Home.
Favourite country visited: India.
Favourite food: Fried rice and sweet and sour/chilli chicken.
Favourite music/performers: Bouyon/Cadence-lypso/Zouk/Kuduro/Jazz/Soul/R’n’B
Favourite TV shows: Rick & Morty, Archer. Favourite film Oldboy (Original Korean version), Isle of Dogs.
What you love about football: Clean sheets.
What you hate about football: Soft fouls and diving. Conceding goals. And, of course, losing
Biggest influence on you: My Uncle John
Footballing ambition: I’d like to reach the highest league possible with this club and I’d also love to be considered for either the Dominican or St. Lucian national team.
Who you would most like to meet I’ll get back to you on that…