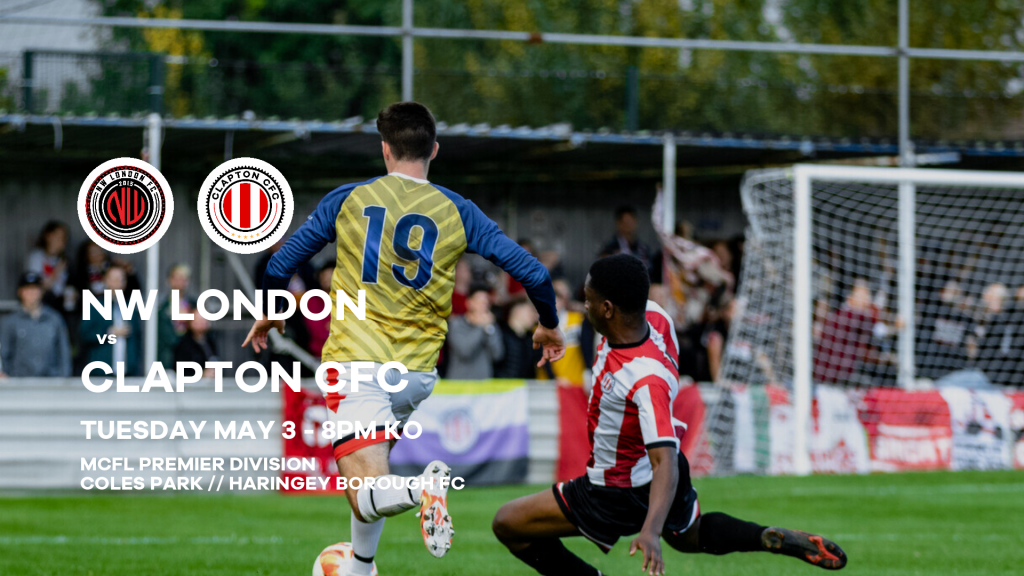 It’s been a pretty good season on the pitch for the Clapton CFC men’s first team with a top three finish on the cards and a chance of silverware next weekend.

However, NW London have had undoubtedly a truly outstanding season, having lifted both the Anagram Records Trophy and the Middlesex County Cup in the last week.

Now that Clapton CFC dropped out of the running for promotion, it means NW London are the last team standing and will go up to Step 6.

They are also battling for the league title with Brentham (who haven’t applied for promotion) while the Tons look like they’ll need to settle for third place.

Like Hilltop, another good footballing side promoted from our division last season and are set to go up again this season, NW London look destined to continue their upward trajectory.

Our last meeting earlier in the season, in the Anagram Records Trophy, was marred by a row over the ticket prices. While no doubt each side thinks they were right, it’s time to draw a line under that. Entry for this one is free.

The two clubs had previously enjoyed a close relationship, including both having iconic shirts produced by Rage Sports, theirs with ‘Black Lives Matter’ on the front.

We both began our journey together in the Middlesex County Football League, getting promotion together from the First Division Central & East.

Indeed NW London were the first MCFL team we ever played, in a friendly in August 2018, which we won 3-1 at the New River Stadium.

In the league that season, however, we lost away at New River again 2-1 and then played out a fantastic 4-4 draw under the Wadham Lodge Stadium lights late in the season.

Another friendly followed in August 2019, which we lost heavily 6-2, before we finally beat them in a competitive game 1-0 in November.

A third friendly was played in September 2020 – this one a 0-0 draw – before we beat them 4-2 in the post-season Middlesex Super 6 League which we helped to co-organise with them.

Our paths will now converge but we wish them well in the level above and hope to renew our acquaintance in due course.

So come along for some midweek football, a good test against the champions elect and a chance to part ways on good terms.

NW London vs Clapton CFC is at 8pm on Tuesday, May 3 at Haringey Borough’s Coles Park on White Hart Lane, N17 7JP.

Advanced tickets are not needed and admission on the night is FREE.

You can walk from either in about 20 minutes. Or you can catch bus W3 from either station – journey time about 5 minutes.

Please support the bar and catering unit run by our friends at Haringey Borough.