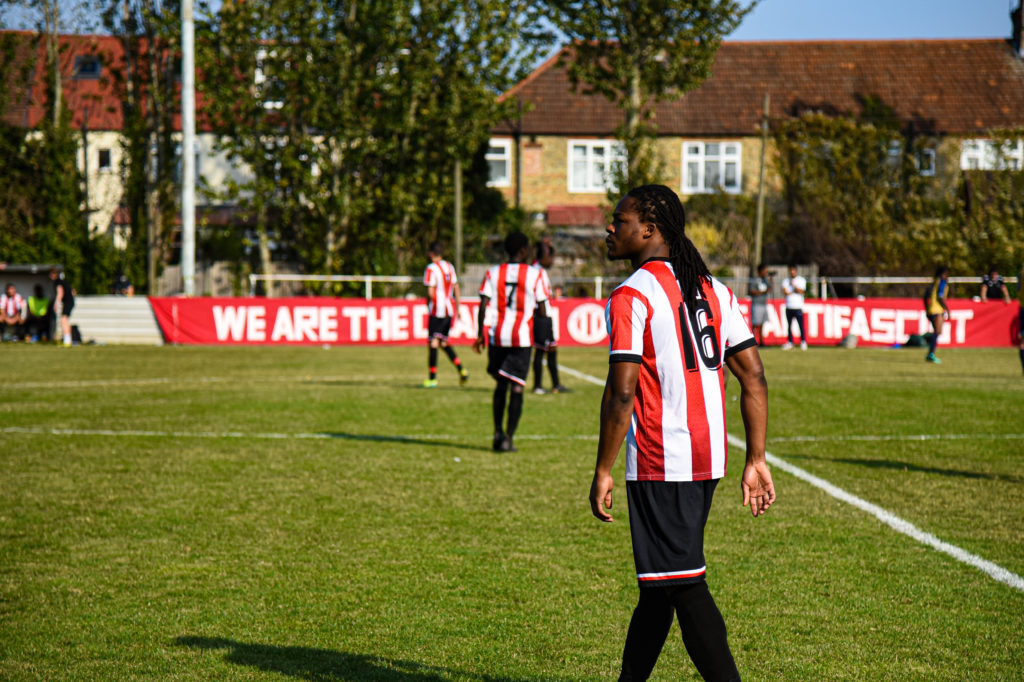 It was a glorious Saturday afternoon at the Wadham Lodge Stadium for the men’s first team friendly with NW London.

Tons were eager to bounce back from last week’s result as they put in a very solid defensive display with some quality chances on the other end.

A goal proved elusive, however, and the final challenge of pre-season ended in a hard-fought draw.

Player-manager Geoff Ocran was at the centre of the action as he picked the following side:

A battle for possession

Both sides might claim they could have scored but a large part of the game passed with teams fighting hard for the ball in and around the middle of the park.

Clapton came close to drawing first blood in the 9th minute of the game, when a brilliant one-two on the left side created the opportunity for a shot that hit the post before going out for a corner.

The curved cross that followed almost ended in an Olympic goal, but NW London’s keeper was having none of it.

Clapton were well organised at the back and restricted opponents to only a couple of half-chances in the first half.

With about 10 minutes to go to the break, a quick throw from the left allowed the Tons another crack at goal with a bullet left footed shot from a tight angle again hitting NW London’s post.

Half-time would arrive with the teams even, although Clapton had created the better chances.

Chances, half chances, offsides and a pen?

Second half picked up where the first had left off, an even contest between well matched sides.

As the players began to tire, however, both sides were able to create a few more clear cut chances.

Tons had a couple of opportunities go to waste as attackers were waved offside, while NW London scored in the 88th minute of the match, only for the linesman to rule it out.

Clapton goalkeeper Jack Francis can also claim some responsibility for the zeroes in the scoreline.

With 15 minutes to go, friendly fire – a mishit defensive clearance sent the loose ball into the path of a NW London’s striker.

But Francis was alert and rushed out from his goal to make a superb 1vs1 save and keep the scores even. It was to be their best chance of the game.

There was some controversy in the 55th minute when Tons attacked from the right and Josh Adejukon was brought down in the box.

We will let you draw your own conclusions, as the incident was caught on camera:

“If we’re not gonna win, let’s not concede”

Stu Purcell provided those words in the post-match interview, and they seem to sum up the team’s attitude quite well.

Clapton were structured and disciplined, even if they were frustrated at the other end of the pitch.

A clean sheet gives the team a platform to build from as the club looks forward to a new league campaign. Tons play Indian Gymkhana Club for the Middlesex County Football League Premier Division on Sep 26.