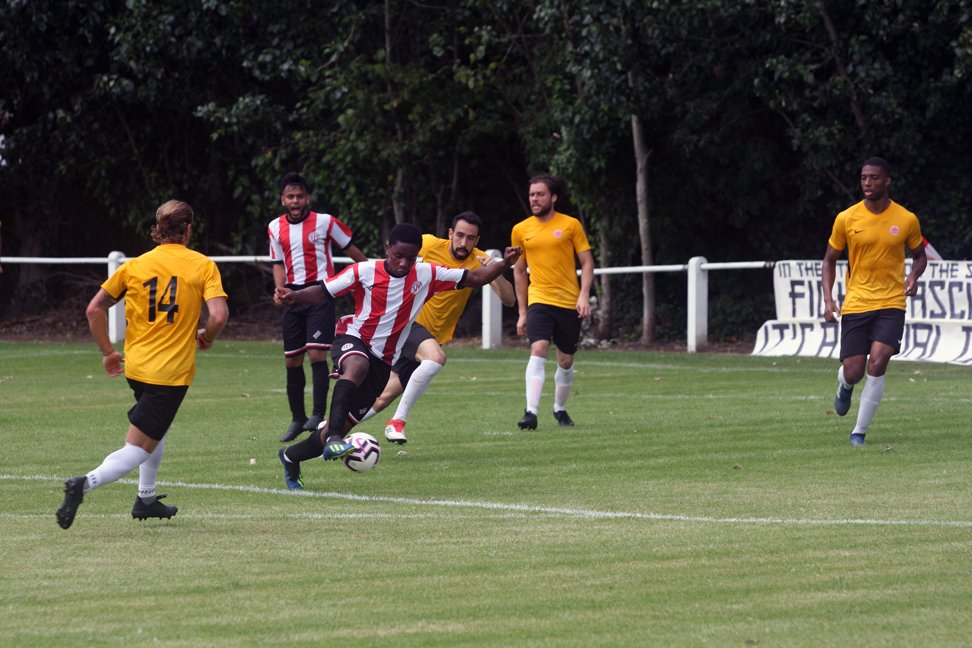 Three second half goals in as many minutes saw Clapton’s MCFL Premier rivals North West London take the pre-season bragging rights and set down a marker for the 2019/20 season.

The August sun was shining as the Tons faithful made their way to Walthamstow for a highly anticipated double header of pre-season clashes. The afternoon would turn out to be all about the women’s team, who convincingly beat Santacruzense in their first match wearing Tons colours. But first up at the Stray Dog was a men’s team encounter against North West London.

As with previous games against the team known as the Gorillas, large periods of the game were closely-matched. An early chance came for Justin Cummins who used a free kick from the halfway line to try and lob the ball over the keeper’s head from range. The ball hung in the air long enough to go for a quick toilet break and the North West keeper was able to back track and take it cleanly.

Minutes later, NW were able to convert on their first real opportunity of the game. Daniel Pinheiro made a 90 degree pass across the box and a couple of Clapton defenders. He found the feet of striker Wesley Negri, who was able to easily tap it in.

Off the restart North West drew another halfway line free kick. Cummins tried the same trick as before with much the same effect.

However, it wasn’t long before the Tons were able to draw even. Stef Nielsen and Bogdan Panescu set up new boy Bilal Hussain after stealing an attempted clearance and stringing together several passes between them. The North West goal keeper was potentially put off by a small dog that heckled him from behind the goal for the whole of the first half.

As the opening period went on, North West started to find and exploit gaps in the Clapton defence more frequently. A headed goal was struck off by the linesman’s flag. At the other end of the pitch, Panescu and Nielsen had chances in quick succession.

In the dying minutes of the half both teams were able to find the net. North West made it 1-2 when Phil Da Silva found some space in the box and slotted it to the keeper Jack Francis’ left.

Hussain evened things up again when he was left with acres of room in the box. He got on the end of a trademark Nielsen delivery to steer in a cushioned header.

In the second half, a mostly competitive performance was hampered when the Tons briefly lost control of the game. They conceded three goals in less time than it takes to boil an egg. And a soft-boiled one at that…

Pinheiro found space on the left of the pitch to take a long pass. The Brazilian was able to control it and get a shot away in two touches sending the ball to substitute keeper Ashley Headley‘s right.

The very next attack of the game led to a North West corner. This was taken short to the edge of the box, where Johan Ahipeaud was able to strike it clean over Headley’s head.

The rapid-fire trio of goals was finished off by their number 10, Joao Marcos. He hit the goal of the game with a top corner strike from outside the box. Suddenly it was 2-5 to North West.

Clapton made some substitutions, bringing back Panescu, who had gone off earlier in the game. The extra firepower led to several more chances for the Tons, however none were converted.

In the end, NW grabbed the last goal of the match. This time an attacker tumbled in the Clapton area. He was unable to get a clean shot away, but did scuff it enough to send it trickling toward the goalmouth. Ezequiel Franchi was able to tap in to make it six just before the final whistle.

The thoughts of the management team after their final pre-season friendly on home soil: