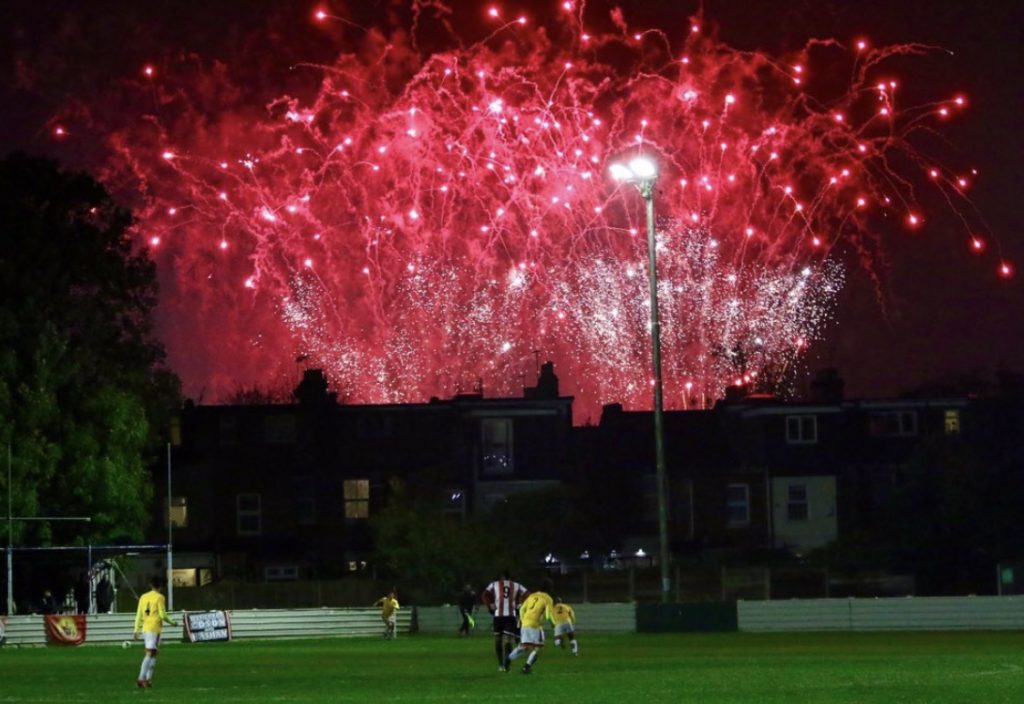 NW London have had the better of Clapton’s men’s side, both last season and in this summer’s friendly that they won 6-2. This time, they were wearing yellow, perhaps a nod to the Brazilian core of the team. The question was: could they do it on a rainy Tuesday night in Walthamstow?

Tons fans were delighted to see goal machine, long throw specialist and all round nice guy Sherwin Stanley back from injury and leading the line.

Kick off was delayed as keeper Jack Francis changed from his opposition-clashing yellow shirt into a green one.

Explosions in the sky

From the off, NW showed the speed and skills that have seen them win five on the bounce coming into this one. Quick feet and neat triangles. Against the backdrop of a Bonfire Night sky, this was fireworks football.

On four minutes, American striker Phil Da Silva blasted over from a narrow angle. Then Jordan Odofin had to diving chest a NW diving header behind for a corner.

(Note prepared for the match report at this point: ‘this was the first competitive game Clapton had lost at home since January.’)

But the Clapton rearguard were up for the challenge. As well as commanding his box, Francis was barking orders at his back line like a drill sergeant. Keeping them focused and well-positioned.

Dean Bouho was putting in a Guinness World Records bid for the longest total distance slide tackled by a single player in a game of football. If you added it all up, he’d have made it from Walthamstow to north west London.

Clapton’s forwards slowly found their way into the game. Rocket-fast Lewis Owiredu had the home side’s first shot on target on 24, but it was straight at the keeper.

NW London’s best chance of the half came when an Odofin slip allowed the prolific Frenchman Hassane Gassama through on goal. He tried to dink it over Francis, but it hit the top of the bar and went over.

The best effort for the Tons was an acrobatically-saved Stanley header.

But Clapton’s forwards couldn’t quite get it right. A number of glorious chances came and went.

Stanley hit a low angled shot that Gorillas goalie Charles Casey did well to get down and block. It popped up for Owiredu right in front of the goal. Just one defender in the way. But the young Tons winger couldn’t get his feet right and NW were able to snuff it out.

Odofin put one towering header over the bar and another past the post. Owiredu was racing to the byline and skidding the ball dangerously across, time and time again. On one such occasion, the NW centre back let it slip under his foot. It came through to a completely unsuspecting Stanley, whose surprise gave the defender time to recover and block.

A succession of the visitors went down with cramp. This may have contributed to the dramatic change in the game. The Tons had more clear cut chances in this short spell than in whole games earlier in the season. But they just couldn’t bury one.

It took one of those Stanley throws to break the deadlock. Just having returned from the cricket season, the Clapton striker bowled one right into the six yard box. It pinballed off some shins and into the net. Although Odofin is making a claim for it, NW’s Daniel Pinheiro has owned up to the own goal.

Having done so much well all game, Francis was then called upon to do something exceptional. A low NW ball from the right was first-timed from close range. Francis stuck up an arm and sent it flying over the bar. As good as scoring a goal.

The Tons still had chances to put it to bed. The introduction of Josh Adejokun was causing further problems for the strained NW backline.

Owiredu, again in front of goal, again couldn’t dig the ball out of the six-yard box mud and get a powerful shot. Easy save for the keeper. Next Julian Austin, another impressive performer on the night, pulled a long distance shot just past the post.

Then what might have been the greatest goal in Clapton CFC history.

Bouho slide tackled a guy and came out with the ball. The crowd were already celebrating this like a goal. Then, he stood still, inviting a midfielder to take it off him. The NW player took the bait and lunged in. Deano popped it round and side of him and ran round the other to collect. He played a great ball down the line to Stanley who found Owiredu with a pinpoint cross. But unfortunately the move didn’t have the finish it deserved – Owiredu scooped over the bar.

We can only blame a bobble.

The away side launched a couple of desperate late attacks but with the Tons defending nothing short of heroic, they couldn’t find an equaliser.

NW couldn’t do it on a rainy Tuesday night in Walthamstow.

All of Clapton’s defensive unit performed superbly, but Francis’ presence and incredible win-saving save make him the stand-out choice.