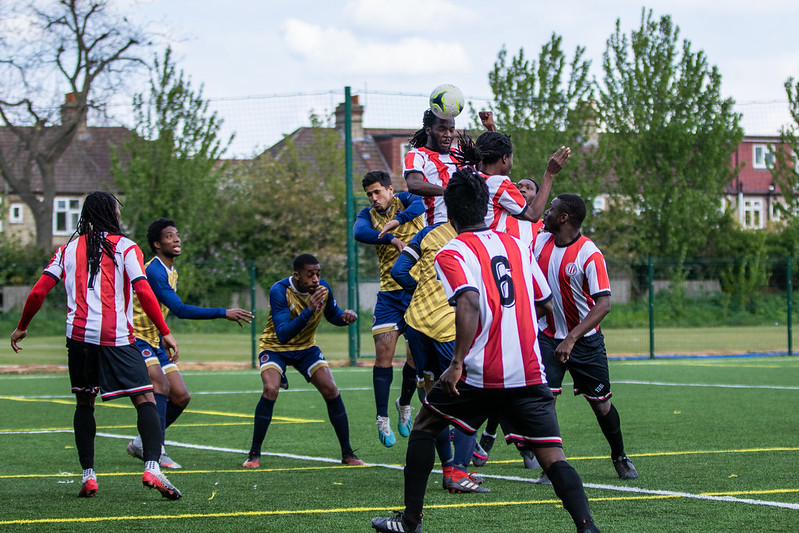 Three goals in a manic ten-minute spell put the Clapton CFC men’s first team back on track in the hunt for Middlesex Super 6 League glory.

All the attackers got among the goals – an opener for Noah Adejokun, two for big brother Josh Adejokun and the fourth from Jake Stevens – to fire the Tons to the top spot in the mini-tournament.

After a slightly disappointing 1-1 draw in the first game of the mini-league against Stonewall, player-manager Geoff Ocran was left with a further depleted squad.

So it was a younger, less experienced squad featuring three teenagers, plus full competitive debuts for Musa Manneh and Arthur Wright, and recalls for Aaron Yfeko, Prince Kwakye and Stefan Kilron.

The Tons started the stronger, with a lively Noah Adejokun brushing a shot against the bar and over within the first few minutes.

After 20 minutes, he broke the deadlock for his third goal in three games, taking on a long ball from keeper Jack Francis, skipping the ball between two defenders and then slotting into the corner.

Five minutes later, Stevens had a chance to increase the lead with a free kick just outside the box but fired it wide.

Up to now CCFC had seemed in control but NW London are always tricky opponents, and took charge for the next 15 minutes or so, helped by some loose passing and concentration lapses from the Tons.

North West London spurned a great chance on 35 minutes, with a first time shot flying over the bar when their attacker was free with just Francis to beat,

However, on 40 minutes they drew level in unfortunate circumstances, a cross whipped in from the left hit Kilron’s swinging boot and nudged it past Francis.

Just before half-time, Wright bustled through a crowd of players but his shot was easily saved, then soon after he dinked inside from the wing and hit his shot over the bar.

Into the second half, and Clapton CFC pushed further forward, playing with a high press but leaving NW London chances to hit on the break.

It was end to end and getting feisty too. Stevens was played in and blasted over the bar within a few minutes of the restart, while Yfeko shot wide. Meanwhile Francis saved well from a low shot as the NWL left winger bore down on goal – and then five minutes pulled off a similar save down the other side.

With 20 minutes to go, the game was on a knife edge, Clapton enjoying the lion’s share of possession and chances, but still vulnerable on the counter-attack.

Then came those three goals in ten minutes to seal the points. First Josh Adejokun beat the offside trap from a cross from Yfeko to coolly slot into the corner.

Then Tafari Nicholas caused havoc in the box and draged the ball back for Josh Adejokun to blast home another.

Finally, from another long ball assist from Francis, Stevens managed to beat the keeper in a 50/50 chase, poking it home from the edge of the box for the fourth.

It wasn’t over yet, although Clapton seemed to be just cruising to the final whistle. North West London were given too much space and time and Cheik Zidouemba grabbed their second on the rebound after another good save from Francis.

But Francis saved the best for last, keeping out a one-on-one in the last minute which could have made it 4-3 and created a very nervy few minutes of injury time.

The three points take Clapton CFC to the top of the six-team league with three games left. Could Ocran and his team be lifting silverware at the end of the month?

With no supporters present and no social media due to the blackout, the choice was made by the management. They chose two goal hero Josh Adejokun.