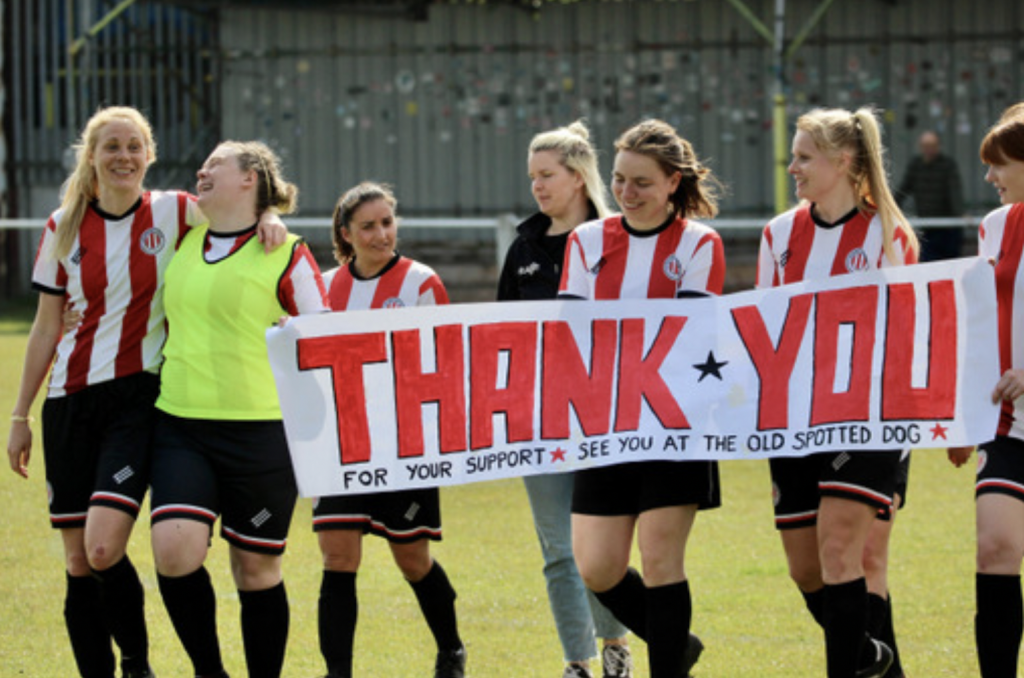 Last season’s 5-1 defeat to Dulwich Hamlet Reserves on the Walthamstow astroturf was a bit of a low point for our women’s first team.

In the away fixture this campaign, the Tons took an early lead only to go down to an agonisingly narrow 2-1 defeat. Close but no cigar.

Especially on the back of their last home game, a statement-of-intent 3-0 win over league leaders Walton Casuals, it felt like a good time to right that wrong.

For this game, the penultimate of the 2020/21 season, Claudio Gomes brought Lucy Spours and Lenny Holmes back into the starting eleven. Both had come off the bench to help the Tons snatch a late 2-2 draw at Enfield Town Reserves last Sunday.

Dulwich had not brought any subs with them from South London. Predictably, this became a bigger and bigger problem for them as the game wore on…

Clapton struggled to find their fluency at first, with the visitors applying most of the pressure.

But the Tons suddenly turned things around with a quickfire double.

On 16 minutes, the Dulwich keeper raced off her line to try to cut out the danger of Emily Link.

But the ball broke back to Holmes who laid off to Spours. The forward pinged it into the unguarded net from 20 yards.

A few minutes later, the Tons doubled their lead. Ciara Monahan won the ball in middle of the park and fed Link on the right. Link embarked on a mad goalward charge all the way to the six yard box, then scooped the ball into the roof of the net. Her momentum almost took her over the railing behind the goal.

Hamlet however were not going to let their hosts run away with the match. On 27, they managed to pull one back with a curling freekick from the left side of the box.

Any Clapton nerves were dispelled ten minutes later, when they re-established their two goal cushion.

And they did so in a similar fashion to the opening – by pressing from the front.

This time the Hamlet keeper came out to deal with a heavy backpass. She knocked it out to a defender, who got in a muddle, gifting possession to Maria Mendonca outside the box. The former Dulwich player floated it home.

Clapton started the second half in a whirlwind, eager to rack up a bigger advantage. In contrast to the cagey start to the game, we were now seeing wave after wave of red and white attack.

Link robbed a defender and powered her way through on goal. But a bobble took the ball away from her and the keeper was able to smother.

Next, Link slid in a sumptuous throughball for Larissa Vieira, who had come on just before the break. Vieira cut back for Spours. But the scorer of the opening goal lifted narrowly over the bar.

The home side were producing some slick attacking football. They didn’t have long to wait to stretch their lead.

Ten minutes after the restart, Vieira found herself surrounded by a sea of pink and blue shirts on the edge of the box. Not to worry. A pirouette and twist later and she was all alone in front of the goalkeeper. The brilliant Brazilian slotted away to make it 4-1.

A couple of minutes later fellow substitute Ciara Robinson got in on the scoring. Forced wide by a Dulwich defender, she managed to squeeze a pinpoint shot into the bottom corner, on the turn.

With the result beyond any doubt – and no subs to relieve their tired legs – the visitors seemed both mentally and physically destroyed.

Link, Vieira and Robinson all had chances to add to their tallies. Bethia Green latched on to a Link throughball and hit the post, but there was to be no more scoring.

With pleasing symmetry, the Tons had turned last season’s result on its head.

This was Clapton’s final home game of the season – they bring the curtain down with a trip to face Brentford in two weeks.

Although the fans could not attend, the team had prepared a ‘thank you’ banner to show their gratitude for the support they have received from afar.

Next time around, they will hopefully be able to enjoy such wonderful performances in person.

Maybe even at a different Dog…

In the absence of an online poll, due to the social media blackout, the players/coaches chose Emily Link.