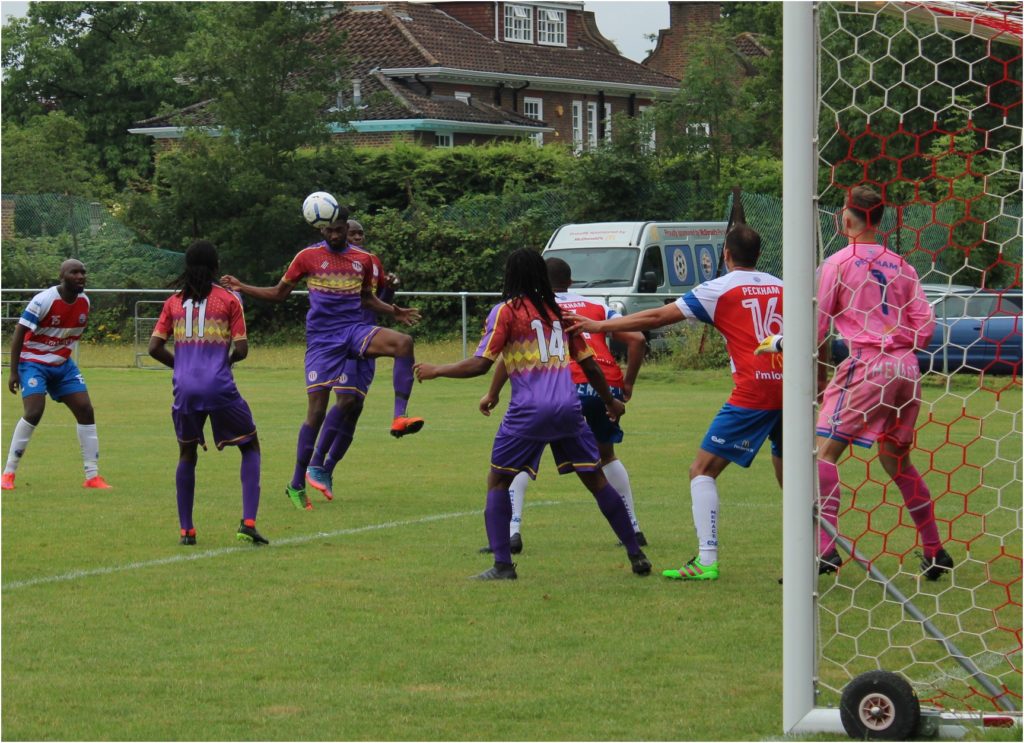 Clapton CFC won this thriller in impressive style, possibly creating more chances in 90 minutes than the rest of pre-season combined.

The most eye-catching team news was the selection of Noah Adejokun alongside Josh Adejokun up front, and the brothers caused problems with their pace throughout.

Despite kick-off being delayed for 20 minutes due to transport problems, and the warm-up being shortened, the Tons were on the front foot from the off.

Peckham Town’s walk-on music – the Only Fools and Horses theme music, of course – had barely faded before Josh broke clear twice for one-on-ones with the keeper but dragged both wide.

In between a scramble in the goal-mouth saw three nibbles at goal, with the strongest shot coming from Billy Wise, but the home keeper was equal to everything.

The attacks kept on coming but Peckham survived and enjoyed two chances of their own, a long-range shot sailing over the bar and then a header from corner screwed narrowly wide.

But the Tons finished the first half strongly, with the younger Adejokun, Noah, beating the offside trap, squaring to Fama Sangare who had surged from full-back, though somehow the chance came to nothing,

The half ended with Josh and Noah creating good chances for themselves – but still the breakthrough goal wouldn’t come.

The waves of attack continued early in the second half, starting with a strong header from Noah, then a clever dinked ball across goal by Paul Oshin guided it on towards Josh as he slid in, but he just couldn’t connect.

Finally the goal came when Sangare’s ball into the box found Josh, and though his shot was blocked once again. Wise was there to tuck away the rebound.

It was almost two soon after but Stefan Nielsen‘s drive from distance was disallowed, presumably hitting someone in an offside position on the way in.

That goal spurred Peckham into pushing forward, and from now on the game was breathlessly end to end. The home side levelled through Marcus Black, then impressive Tons sub Bilal Hussain headed into the roof of the net, running on to a lob by Josh.

Peckham drew level once more, by Black again, but that was short-lived as Hussain tucked home from close range after a free-kick was pumped into the box.

It was left to Josh to grab what eventually proved the winner, with the goal his impressive performance leading the line deserves.

Peckham scored again, with a delightful leaping header from Hady Traore from a Nicky Meta cross. However, the Tons saw out the game for a stunning 4-3 against a very, talented established side at the same level as us.

First half our aim was to contain them, we thought they were going to come at us a bit faster.

They were trying to get their fast strikers in behind, but we nullified that threat and we got a stranglehold on the game.

Like the Lopes Tavares game, I was able to try Josh up top as a plan B and it worked well, they couldn’t deal with him.

The first half was similar to the Stonewall away game, we dominated but didn’t take our chances.

We knew in the second half, with a bit of composure, and better decision making, we’d get the breakthrough.

Credit to the lads for sticking through and coming back again as they have that spirit.