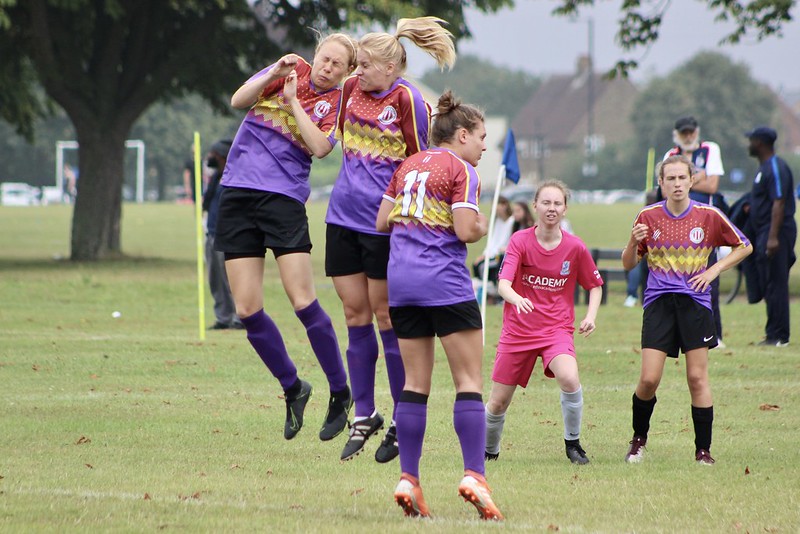 155 days had elapsed between Clapton CFC women’s first team’s final game of a Covid-shortened season away at Luton Town Reserves and Sunday’s return to action behind closed doors in Enfield.

The team had ended the season on a high, recording a 4-1 victory over the Hatters, a result that lifted them out of the relegation places in the Greater London Women’s Football League before the 2019/20 season was declared null-and-void.

An awful lot has happened between March and August. Aside from the Coronavirus pandemic and the unprecedented show of global social solidarity channelled through the Black Lives Matter movement, Clapton also appointed a new management team for the 2020/21 season.

Appointed via an interview process conducted via Zoom and with only limited post-lockdown training sessions under their belts, this was the management’s first opportunity to put their football philosophy into practice against an Enfield Town Reserves side who are replacing Luton Town Reserves in GLWFL Premier Division this season (Luton taking a voluntary demotion).

Gomes and his team opted to play two completely separate XI’s in each half, making sure that everyone got a 45-minute run out in this opening friendly.

Both sides were a mix of familiar names from last season and new trialists, eager to impress and earn a place in the squad.

Clapton’s philosophy was evident in the opening exchanges with the players looking comfortable on the ball and aiming to pass their way out of defence.

Unfortunately, the Tons went a goal down on 8 minutes, after a lovely sweeping cross was converted by an Enfield striker who gave the returning in goal Polly Adams no chance.

Conceding early didn’t disrupt Clapton’s flow or alter their game plan, instead they played their way steadily back into the match.

On 19 minutes, Marta Boiro put Trialist No. 8 through into the penalty area, although she still had a considerable amount of work to do to create a scoring opportunity.

A deft drop of the shoulder and several body-swerves later, she had wrong-footed the entire Enfield defence before retaining her composure to slot the ball past the keeper. Clapton were level – through a goal of the upmost quality.

With 10 minutes to go until the break, Clapton’s defence were punished for a little bit of hesitancy on the ball when under pressure from the Enfield Town front line.

This resulted in Enfield taking the lead with another shot that gave Adams in goal no chance. It was 2:1 to the home side at the break.

The second half saw the return of some familiar faces in the shape of Emily Link up front and Ciara Monahan and Lucy Spours in the midfield.

Link was soon back doing what she does best: breaking free of defence and slotting home past the on-rushing keeper. With a striker of her quality in the side, Clapton will always have an outlet and a lifeline in games.

Clapton’s football continued to show promise but, unfortunately, the Tons were soon back chasing the game. Enfield scored another scrappy goal following more defensive hesitancy to put them back in the driving seat.

Not long after, Clapton’s players thought they were level when a shot appeared to cross the line. Unfortunately, the lack of both goal-line technology, or even a Referee’s Assistant meant that the referee had little option but to wave play on.

Enfield went further ahead, with their impressive number 3 powering in a header from a corner, albeit unchallenged by a Clapton defender.

It was these defensive frailties that coach Gomes would highlight in his post-match de-briefing: challenging the squad to tighten-up in defence, rightly pointing out that we should not be scoring 3 goals and still be on the end of a defeat.

As you would expect from the spoiler in the above paragraph, Clapton did add to their tally with Link – again – breaking-free of the defence to score a second. In between times she even had another shot brilliantly turned around the post by the out-stretched foot of the Enfield Town keeper.

Tons’ keeper Sophia Axelsson made an impressive stop of her own shortly after, diving to her left to prevent an Enfield shot nestling in the bottom corner.

And a completely new line up for second half. pic.twitter.com/056v9oLt0c

The game finished 4-3 to Enfield. In truth, the home side probably deserved their victory. Yet, despite, Gomes’ disappointment at Clapton conceding 4 goals, there were plenty of positives to be taken from the display.

For starters, Clapton fielded two entirely different line-ups and neither of them were outclassed by their opponents.

The Tons’ also showed a lot of composure on the ball and it is clear that they want to play football the ‘right way’ this season.

Add to that, some of the undeniable talent and skill shown by a number of the trialists and we can be hopeful that the new management team have all the ingredients they need for a successful season.

Indeed, the biggest headache the coaching team may face is how to shoe-horn so many incredible players into a starting XI.