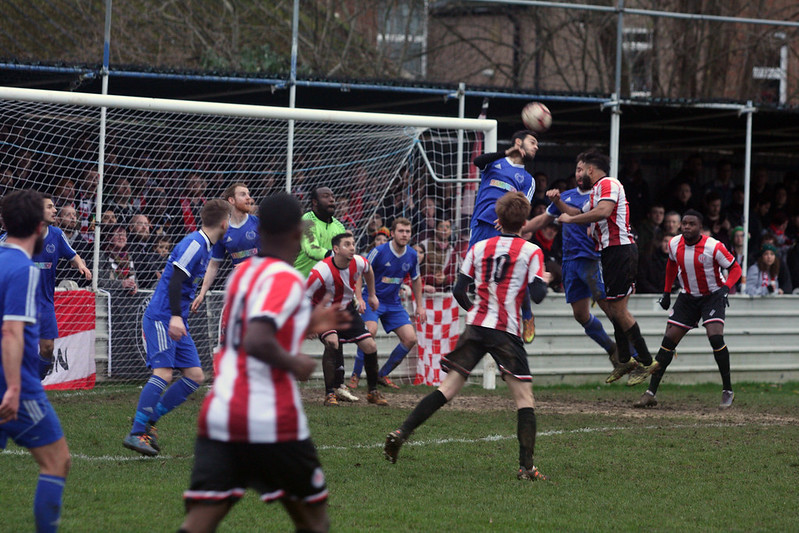 It is always a special occasion when Clapton take on Stonewall. Since the Barnes-based side won the first meeting 4-0 last December, the Tons have come out on top on the last two occasions, 5-1 and 5-2.

This Alec Smith Premier Cup quarter final was the most dramatic yet. After an intensely fought game, with chances going a-begging at both ends, the hosts managed to edge a tense penalty shootout to set up a last four clash with London Samurai.

Goal of the season (nominations closed)

After a quiet opening, a lightning bolt.

Bogdan Panescu beat his man on the left wing. Then he lost the ball. Then he won it back and laid off for Liam Smyth.

The Tons left back caught the bobbling ball perfectly, sending it into the danger area with mad pace. Just the delivery had already drawn audible gasps from the Clapton support.

Striker Aaron Yfeko still had a lot to do. It was slightly behind him. Would he try to hold it up? Knock it back to an onrushing attacker? Nope. Yfeko wrapped his boot around the ball and fired it back into the corner of the net.

There was one of those magical moments when a goal is so good it takes a second to compute. The Clapton fans were momentarily silent. Then, euphoric. Some were hyperventilating.

That’s what an immaculate volley can do to a football fan.

For some reason, the referee decided we should play on after that. We all should have accepted we had seen a moment of extreme footballing genius and called it a day. But on we went.

Shortly afterwards, Bilal Hussain – man-of-the-match in last week’s win over Samurai – slid one just past the post when through on goal.

A comedy villain always livens up a drama. Stonewall supplied two, both of whom have a bit of back story with the Tons.

Number nine James Baker scored in the first meeting between the two teams and enjoyed doing a big celebration in front of the Clapton fans. Number seven Nasar Nakhli scored in the league meeting in October and did likewise.

Just before the half hour mark, Stonewall vociferously protested a penalty claim, even though it was hit from point blank range against a defender’s hand. Baker did an unnecessary protest. Boo.

Then a serious of muddy midfield clashes culminated in Smyth being dreadfully fouled. Nothing from the ref.

Next, Baker wiped out Smyth on the edge of the Clapton box. Nakhli ran up to taunt the grounded defender. Perhaps he was jealous that his teammate was drawing more boos from the home support.

In fairness to the referee, he couldn’t have been expected to see just what a blatantly deliberate foul it was as he was very far away at the time. He did jog up and book the Stonewall striker, quite a lenient punishment for attempted homicide.

For some reason Nakhli had to get involved again, coming over to remonstrate with the card-brandisher. This led to the surreal sight of Stonewall captain Jay Lemonius holding his hands over the ref’s ears to prevent his teammate talking his way into trouble. Maybe some of the other Stonewall players could learn from their supremely chill skipper, who knows how to play football and still have a good laugh.

The half ended with another spot of chaos when Stonewall were awarded a contentious freekick, resulting in a big bout of argy-bargy. Nakhli was up to his old tricks. Stefan Kilron was raging. You don’t want to mess with him. And the Clapton defender was to get the final say on the day…

In search of a second

At the start of the second half, Clapton missed a golden opportunity to make life easy for themselves. Yfeko prodded a crossed ball out of the keeper’s grasp. But Hussain sidefooted past the post with only a defender on the line. Not one the young winger will want to remember, but sorry Bilal, here’s a video of it:

Aaron ‘good feet for a big man’ Yfeko was continuing to torment the Stonewall defence with little deft touches. The pick of the bunch was a swivel-and-shot combo from outside the box that rose just over the bar.

Sub Lewis Owiredu, who notched a hattrick against this opposition last time around, looked in the mood again. He made a succession of chances for himself by jinking in from the left wing. He just over-jinked a couple of them and couldn’t apply the necessary finish.

Up the other end, George Watmough burst into the box and drew a good save from Dan Anfossy, making his first appearance for the Tons since September.

There was another confusing moment when Stonewall were awarded a penalty, after one of their players had been ruled offside. The referee hadn’t seen the flag. After a long break in play, he deferred to the decision of his assistant and revoked the spot-kick.

Almost inevitably, it was shouldn’t-still-be-on-the-pitch Nakhli who grabbed the equaliser, slamming home a loose ball on the edge of the Clapton six-yard box.

Another penalty shout went up, this time for the home team, claiming handball. But it was waved away. The ref was too far away again.

Chances here. Smyth and another second half sub Sherwin Stanley had a couple of chances to get the Tons back in front. Chances there. Anfossy made another decent save from an attempted Watmough chip. Chances everywhere. Stonewall’s Dan Whitehouse cleared a Julian Austin header off the line. The game had entered the realm of total unpredictability.

Regular time ended with a suitably manic passage of play. Another Austin header was cleared from off/behind the line (delete as per bias). The ball went straight up the other end. Stonewall had the Clapton defence overloaded. It fell to Lemonius to win the tie with the last kick of regular time.

But there was Anfossy, again, with other ideas. A great block, to take us to penalties.

As is the way when one team has looked dominant in normal time, the Clapton players didn’t seem to fancy the shootout. CCFC have a 100% record to date. But specialist Yacine Rabia has left the country.

Not sure who won the toss, but seeing as the choices were to shoot into the Clapton end or the other Clapton end it didn’t make a lot of difference.

Stonewall scored again, then Austin’s effort was saved by their goalie Dennis Aware. The fans behind the goal shouting ‘Dennis! Dennnnnnnnis!’ weren’t getting to him.

The visitors’ third went in straight down the middle and Cemal Agdelen missed his, leaving the Tons 3-1 down and on the verge of elimination.

But Lemonius slipped and missed his penalty, much in the same way as David Beckham (who was born nearby, in Whipps Cross hospital) against Portugal in 2004. Becks is surely the only footballer whose trademark skill was the same as the name of the hospital they were delivered in?!

Anyway, back to the shootout.

Stonewall had another chance to win it…but Anfossy saved. Then Stanley scored.

We were heading into sudden death.

Stonewall scored. Then sub Charlie Fagan scored, just. Aware got a hand to the ball but couldn’t quite force it round the post.

Anfossy saved the next one and having lost count, sprinted in celebration towards his teammates, who had also lost count.

Stonewall got back in the scoring groove. Then Nick Loblack put his one away to make it 5-5.

The next penalty was fired over, leaving Smyth with another chance to win it for the Tons. But he only went and fired over too!

Then Anfossy guessed correctly again, making another fine diving save to his left.

Next up was Kilron. He had been in a rage an hour earlier at Stonewall antics. But now he was the coolest man in the house. The defender buried it in the corner, sunk to his knees, got buried under his teammates in front of the roaring support.

Wrapped up just before natural light left us. Just before the keepers had to take spot kicks (a touch disappointingly).

The most intense game of the season so far.

Hopefully we can still be friends after it all.

Did we even have to ask?