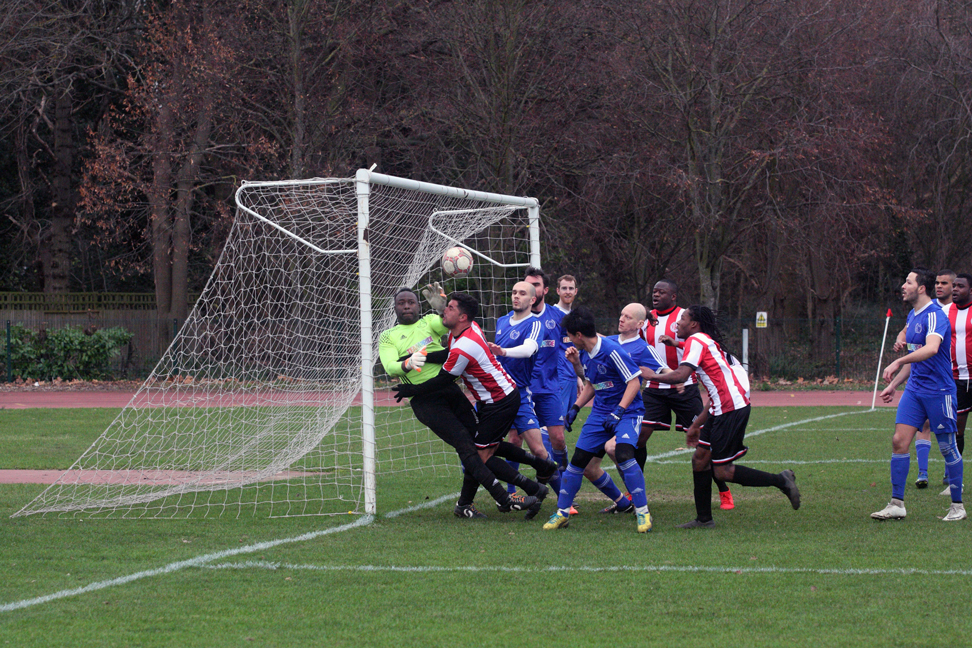 How did they build the pyramids? Who really killed JFK? Why is Piers Morgan? How did Clapton Community lose this game 4-0?

These are the great mysteries, which will probably never be solved.

In contrast to the deserved defeats in the previous two league games against Ealing Town and FC Star, the Tons created the vast majority of the chances against league leaders Stonewall FC, only to come away empty-handed.

The hosts defended resolutely and picked Clapton off at the end with some clinical finishing.

There were seven changes to the Tons side that took the field against FC Star the previous week. Manager Geoff Ocran handed first competitive starts to Yacine Rabia, Ben Kadler and Cemal Agdelen.

Today's Clapton line up. Kick off at 2pm. pic.twitter.com/SUHSw7cF1h

Clapton had the first goalscoring opportunity. Eliot Crosbie was hemmed in on the left flank, but managed to whip a beautiful ball to Sherwin Stanley. The unmarked striker headed wide from only a few yards out.

In what would be a theme of the opening period, Stanley played through the energetic Josh Adejokun on the right. However, the winger miscued his shot into the sidenetting.

Then, from the other side, Liam Smyth had a potshot from distance that flashed just past the post.

On 27 minutes, Stonewall had their first good chance when a defensive header fell to striker James Baker in the box. Dan Anfossy made a smart one-handed stop.

Just past the half hour mark, the Stonewall defence survived a massive scare. A swirling Smyth corner caused chaos in the six-yard box. Adejokun’s header was flicked onto the bar by a Stonewall defender. During the ensuing melee, a follow-up pinged off the post.

Clapton’s next effort was more refined. Crosbie released Adejokun on the right, who swung in a delicious ball. Stanley volleyed goalwards, but keeper Dennis Aware lived up to his name and palmed it over.

From the resulting corner Nabeel Hashim, who had come on for an injured Agdelen, stabbed just wide of the post through a forest of legs.

The home defence were like a wall, made out of some kind of sturdy material.

At the other end, Nasar Nakhli had a snapshot from the edge of the box. Anfossy, rooted to the spot, was relieved to see the ball squirm just wide.

The keeper made a fine save shortly afterwards when Jehmeil Lemonius, breaking through on goal, tried a cheeky lob. But Anfossy reacted quickly to tip it away.

Even with these late Stonewall chances, it was the visitors who went in at half time feeling they should have had their noses in front.

Against the run of play, the home side took an early second half lead.

It seemed that Nakhli was going nowhere on the touchline, only for him to twist and turn, make an angle and fire into the bottom corner.

The Stonewall players celebrated wildly in front of the Clapton fans.

The response was almost immediate. Crosbie curled a beautiful long range shot over the stranded goalkeeper, only for it to cannon back off the bar.

A poor goalkick saw Clapton coming straight back at them. Adejokun looped the ball along the goal line, with goalie Aware nowhere to be seen. Stanley rushed in, but just failed to connect to tap into the empty net. The ball went all the way through to an off-balance Crosbie, who couldn’t turn in from the tight angle. 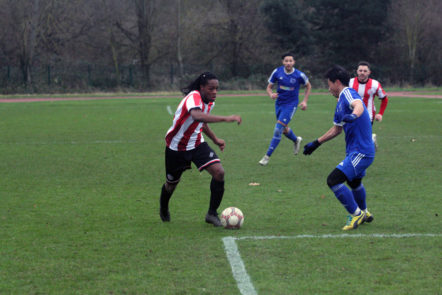 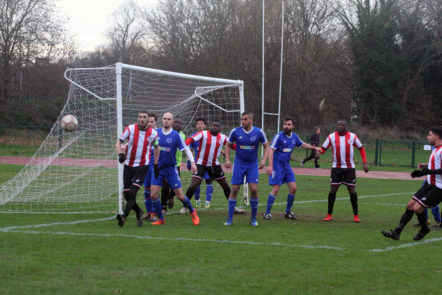 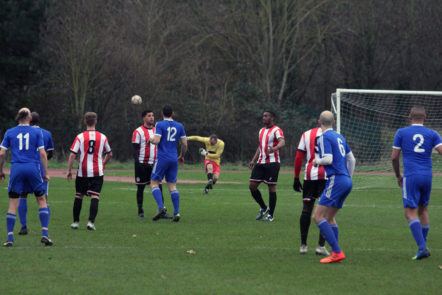 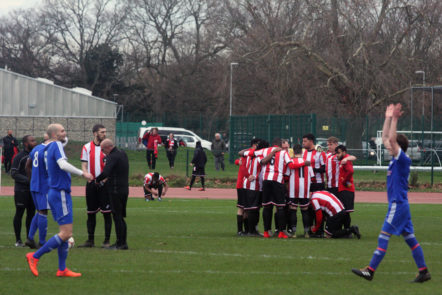 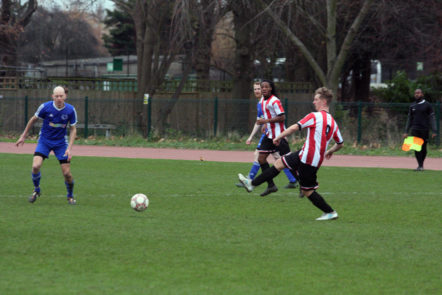 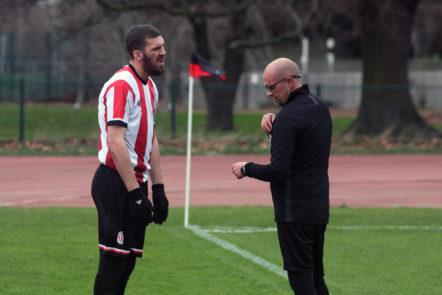 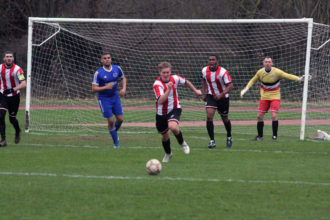 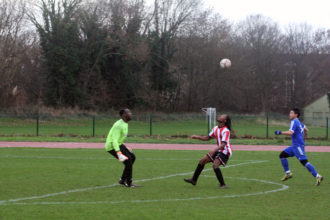 Then, Clapton went even closer.

An Anfossy goal kick was flicked on by Stanley. Adejokun popped a header over the Stonewall keeper, who had rushed out of his box. The ball trundled towards the goal line, but Gaku Sato managed to sprint back and hook off the line.

The defender ended up tangled up in the back of the net, which is what you want to see from a good goal line clearance.

Past the 80 minute mark, substitute Bogdan Panescu cracked a long range effort against the base of the post.

The goal frame was emerging as a strong contender for Stonewall’s man of the match.

Call it bad luck or call it wastefulness. Either way, Clapton were severely punished for not taking their chances.

Pressing for an equaliser, the Tons committed too many players upfield. This allowed Stonewall sub Georgios Volis to burst through on the right. He squared to Baker, who stroked home an easy finish.

The Stonewall players celebrated wildly in front of the Clapton fans for a second time, this time knowing it was gamew over.

A few minutes later, Anfossy saved an acrobatic effort from Denisas Zadeikis, but it fell straight to Oliver Rabie for another simple conversion. 3-0.

There was still a touch more time for Rabie to run onto a lofted through pass and dink over Anfossy for his second and the home side’s fourth.

The Stonewall players seemed too embarrassed to wildly celebrate in front of the Clapton fans by this point and just jogged back to halfway.

The ref blew up straight after the restart.

Incredible support at non-league level from @ClaptonCFC today. To get 100+ fans singing throughout was insane. Good 4-0 win though, #wehateyounumber10 😂

The one-sided scoreline aside, the match was a great advert for this level of non-league football.

Perhaps it would have been a better candidate to have been played at Wembley, where Stonewall defeated Wilberforce Wanderers earlier in the season!

My view today, each time I looked down in disbelief that @ClaptonCFC hadn't scored.
(4-0 at full-time to @StonewallFC, after two goalline clearances and Clapton hit the frame 5 times – good game, can't believe the scoreline.) pic.twitter.com/cmFfFBfMzf

For the Tons, this was a third league defeat in a row. Next week sees them at home to London Samurai in the quarter final of the Jim Rogers President’s Division One Cup, where they’ll be hoping to put an end to this losing streak.

Stu Purcell and Sham Darr gave us their take on the harsh defeat, including the positives they will take into the rest of the season.

It was a very strange game. They hit the post five or six times. We were defending for lives on plenty of occasions. Two of the goals came in the last two or three minutes, which put a slightly unfair scoreline onto the game. We stuck together. We didn’t play our best. They will feel very hard done by, justifiably, but at the end of the day it’s results that matter and we took our chances at the right moments.

Even though he didn’t manage to get on the scoresheet, Eliot Crosbie produced the best Barnes performance since John’s rap on World in Motion.

Special mentions too for Josh Adejokun (who had the Stonewall left back on toast), Ben Kedler’s terrier-like shift in central midfield and the calm, classy defensive work of Stefan Kilron.

Considering it ended in a 4-0 defeat, there wasn’t a single sub par performance in red and white.

Man of the match poll for the @StonewallFC game