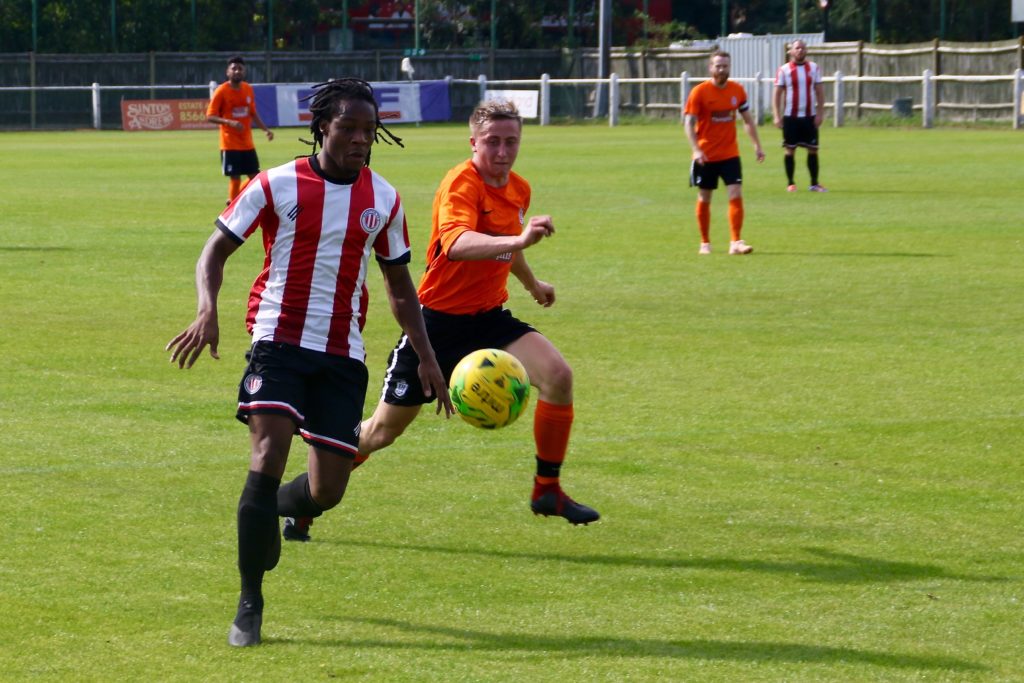 Welcome to the big time.

But the Tons showed signs that they were up to the new challenge, before wilting in the second half in scorching late August sun.

Hanwell Town’s Powerday Stadium provided a pleasant setting for Clapton fans used to no-facilities-at-all from the previous season. And Pitshanger made the travelling supporters very welcome too.

With an absence of established strikers, he gave right back Stefan Kilron a chance to lead the line. Breakout star of Tuesday’s victory over Sporting Hackney Noah Adejokun was rewarded with a first competitive start.

Bruno Pereira, recently signed from NW London, also made his debut in midfield.

There were a couple of very special guests, with Clapton life members Mike Fogg and John Sharpley joining the supporters on the terraces.

Like the season opener, the first half was tight and even.

And while Ocran will be looking to boost his offensive threat, credit must go to a new-look, stingy backline. Ellick Coleman, Dean Bouho, Jordan Odofin and Liam Smyth were the standout performers, backed up by keeper Jack Francis.

There were very few clear-cut chances for the Carrots. And very few for the Tons. In fact, the best moment of the half was this chant from the visiting fans:

We love parsnips too (and cabbage!)

But carrots we hate you!

Clapton fans, to the tune of ‘Over Land And Sea’

The only decent opportunity for Clapton came on 38 minutes.

The Tons won a free kick on the edge of the box, after some nice Adejokun interplay. But Stefan Nielsen popped it just over the bar.

Then came Pitshanger’s only decent opportunity of the half, when a ball fell to a striker right in front of Francis. But he kind of fell over and prodded it straight at the Clapton goalie.

The Tons had to deal with a series of Carrots free-kicks, as the referee kept involuntarily raising his arm – like Dr Strangelove – and always in the direction the hosts were shooting.

On 63 minutes, the hosts broke the deadlock. The Tons were caught napping as a free kick floated into their box. Josh Norris volleyed it back across Francis and into the corner.

This really changed the game. Whether deflated by the goal or wilted by the heat, Clapton dropped deeper. Pitshanger got more and more chances.

Inevitably, the hosts got a second goal too. A well-worked move was finished off by captain Greg Miley.

With little to get excited about in the pitch, the visiting fans pushed home their anti-carrot agenda:

Parsnips in the morning

And last thing at night

Clapton fans, to the tune of Touch Me by Rui Da Costa

Reflections from the Clapton camp:

Pitshanger skipper Miley also gave us his take on the game:

It was a really good game. A lot of the guys had watched online and heard the buzz about Clapton. You guys were a bit of an unknown entity so we just planned to stick to what we’ve been doing pre-season and the first few games. Move the ball about with pace. Keep it tight. Which we did. We heard you had a couple of good wingers and just wanted to get really tight on them. You can see where you really damage teams, but today we got away without conceding. We play a game where we move the ball around and on a hot day you tire out teams. The gaps just got bigger and bigger.

Miley scored Pitshanger’s killer second goal, but he was seen wearing a Clapton scarf in the clubhouse afterwards so we can’t stay mad at him.

Jack Francis made a string of good stops to prevent a heavier defeat: