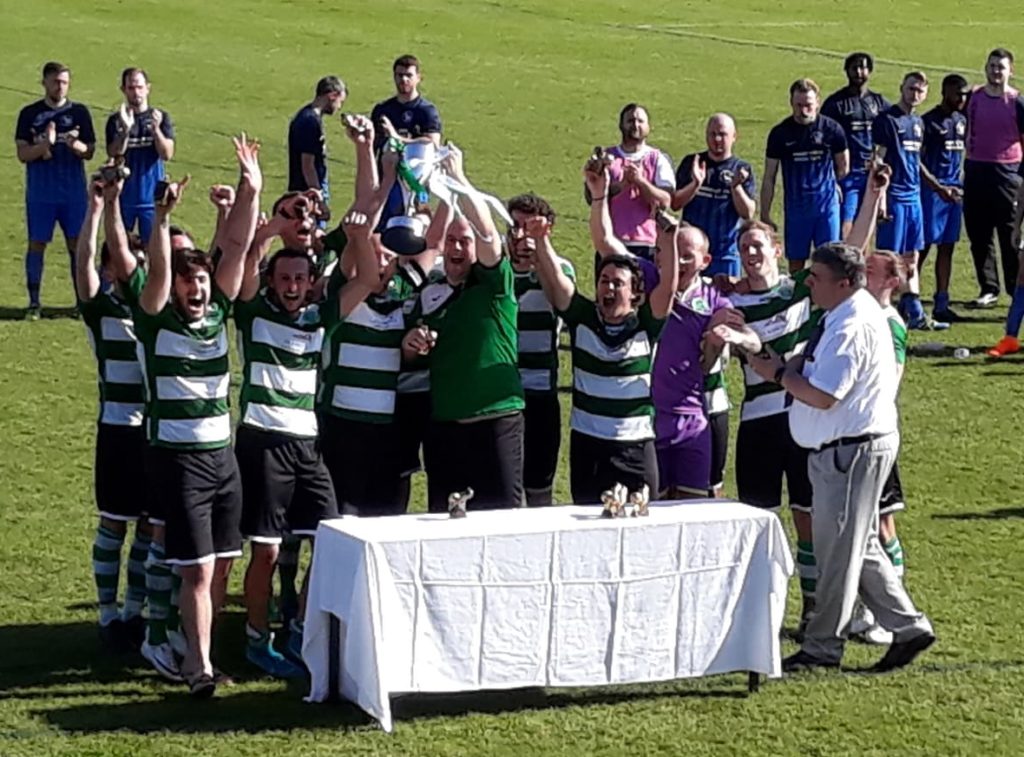 Two more games to play. Two more hunks of silver up for grabs following on from that dramatic penalties win over Hilltop in the Jim Rogers Presidents Trophy.

Before the climax of the league season against FC Roast, Clapton take on Catholic United FC in the final of the Anagram Records Trophy.

The match will take place at Redbridge FC’s Oakside Stadium.

The Tons will be facing opponents with a rich history. In fact, they have been around in one form or another since the 1930s, first as Southend Catholic, then as Catholic Athletic. They took their current guise as Catholic United in 1959.

Catholic‘s green and white hoops date back to 1968, when their chairman wrote to Celtic asking if they could purchase some kits. A couple of weeks later they were delighted to receive a package containing the kits and a letter wishing them well.

They currently play in the Essex Olympian Premier Division, based at Bowers and Pitsea’s Len Salmon Stadium. That’s one step higher than the Tons.

The #superhoops (as they refer to themselves in their Twitter bio) are currently fifth in the league, having played all their games. They will finish there unless Rayleigh Town win their season closer to overtake.

As a gauge of the level, Clapton were edged out of the BBC Essex Cup 5-4 by Hutton this season, who sit nine points and three places below Catholic. At the moment, that’s our only cup defeat.

Clapton’s route to the final of the Anagram Records Trophy started with a 3-1 victory over Epping Town at the Stray Dog last October. In November they brought a 2-0 win back from a tricky trip to Letchworth Garden City Eagles.

The Tons dispatched Chipperfield Corinthians 3-0 in the quarters. Ware FC were conquered 3-1 in the final four.

The Essex outfit have had an even more impressive run.

They won 4-0 at MCFL Premier’s Sporting Hackney then thrashed Sandridge Rovers 9-0. Next up was a 3-0 victory over Old Bradwell United in the quarters.

They needed extra time to beat another MCFL club, Polish-heritage side PFC Victoria, 2-0 in the semi-final.

So in total they’re unbeaten in the Anagram Records Trophy – nine wins, no defeats – and haven’t conceded a goal in the last eight matches. Gulp.

Clapton will need to be at the top of their game to be in with a chance of bringing another cup back to Walthamstow.

Another nail-biting victory vs Samurai which leaves us one victory away from winning the league. Our defence held firm despite a onslaught at the end for Samurai for a well deserved victory.

Another record attendance and by far the biggest step 8 crowd in the country last Saturday. Thanks again to everyone who attended and helping us cross the line!

With a league cup already secured and potentially a league title next week, we have a chance to add another trophy to what is already a ground breaking season.

Catholic United are the current holders and play in Step 7 league so will be the favourites but we’ve done well in this competition as underdogs and we believe we have one more result in us to bring the cup home.

The club has been advised by the Anagram Records Trophy organisers of the following arrangement:

Please advise supporters NOT to bring any bags with them, if supporters/spectators do have a bag it will be searched before they are allowed to bring it into the ground.

Refreshments will be available to those spectators who attend. (The Clubhouse does have an alcohol bar and tea bar both of which will be open).

We have also been told that all alcoholic drinks will have to be consumed in the clubhouse. We understand that this is a licensing requirement of Oakside.

While rules like these are not something CCFC fans have been used to this season, they are the kind of rules members who used to follow Clapton FC will be familiar with.

What is different is that this is a game that almost did not go ahead. It has taken a lot of effort by club members to get the game rescheduled, so we ask our fans and members to be mindful of this and to plan accordingly.

Oakside Stadium is next to Barkingside station on the Central Line, which is running a good service on Saturday. It’s Zone 4. There is free parking in a car park at the ground.

Admission charges are: £5 adults, £3 children/pensioners, free for young children. A programme will be on sale, with price to be advised at the gate.