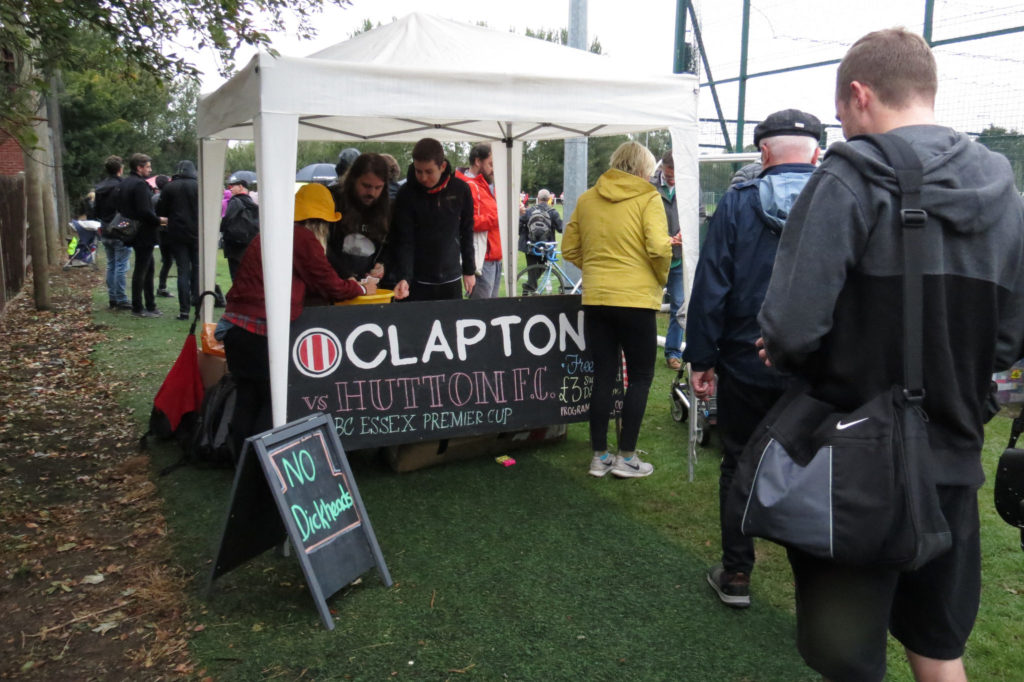 On a drizzly autumn day, just over 400 people saw Clapton CFC’s first competitive game at the Stray Dog – and they were treated to a barnstormer that will live long in the memory.

The Tons looked dead and buried at half-time but mounted a dramatic comeback, only to lose out to the odd goal in nine as Hutton progressed to the second round of the BBC Essex Senior Cup.

The Essex Olympian side stamped their authority on the opening stages, aided by some nervy play in the Clapton backline that gifted them a raft of early chances.

The visitors – who play one step in the football pyramid above CCFC – managed to convert twice to establish a commanding 2-0 lead with little over 20 minutes played.

Going forward, Clapton were struggling to open up their opponents and problems were compounded by injuries that forced off defender Andrew Lastic and midfielder Phil Blakesley.

The only glimpse of threat from the home side in the first 45 came when Sherwin Stanley spun away from his man only to fire straight at the keeper, after nice work from Stefan Nielsen on the left wing.

Hutton added a third goal just before the break, slotting home the rebound to a free kick that had rattled the bar. With the tie seemingly put to bed, many Clapton fans were hoping for little more than a show of mercy in the second half.

But as was the case on the previous Saturday, when Clapton had turned around a 1-0 deficit against Ealing Town to win 1-2, the performance improved dramatically after the break.

Player-manager Geoff Ocran – who named himself on the bench – switched from three at the back to a 4-4-2 formation and the more direct style immediately caused Hutton all sorts of problems.

Paul Oshin, making his full debut, was the driving force in midfield, winning headers and moving play forward. Clapton’s attackers were also linking up brilliantly: Stanley, Nielsen and Eliot Crosbie taking turns to play each other in on goal with first touch flicks from long balls.

This bore fruit when the outrushing Hutton goalkeeper brought down Stanley, who took the chance to fire home from the spot himself – handing the Tons a lifeline.

Here it is from two angles

Shortly after that, Crosbie burst through on goal and finished smartly for 2-3 to really bring the contest back to life. Hutton then scored a penalty against the run of play to make it 2-4, but just one minute later and Clapton had reduced the deficit again through a back post header from Oshin.

The ding-dong half continued with the visitors extending their lead to 3-5 from yet another penalty, when substitute Tom Carding was adjudged to have backed into a Hutton player – a decision described as ‘very harsh’ by Ocran.

Keeper Dan Anfossy did well to get a hand to the low effort, but it agonisingly looped over him into the top corner.

Yet again, Clapton bounced back. Stanley shot past the Hutton goalie at his near post to set up a thrilling finale. In spite of some CCFC players looking dead on their feet, having put in immense shifts harassing Hutton’s players all over the park, the late chances were all at the right end.

As the rain teemed down and the fans turned up the volume, Anfossy made his way forward for an injury time free kick. The dream of the most dramatic equaliser in the history of our club (of any club?!) seemed on.

But in the end, the set piece came to nothing and Hutton will have been relieved to have avoided the tie being taken to penalties. 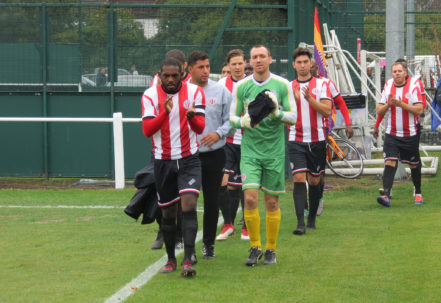 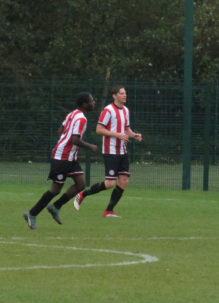 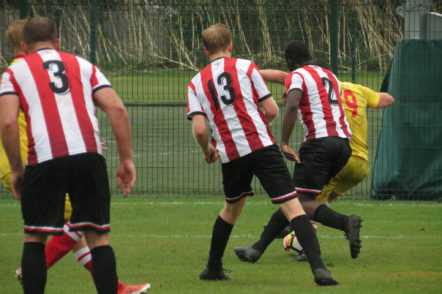 Ultimately, the Tons fans will have gone home satisfied that their side had given their all against opposition a league higher in the pyramid, fighting back again and again when they had seemed out of it.

While the management team were left ruing what could have been if Clapton had started on the front foot, they were also full of pride in a committed, passionate performance.

If there can be such a thing as a ‘feelgood defeat’, this was it.

After a stunning second half and almost a comeback we lost 5-4. Here is Yacine Rabia and Geoff Ocran.

Afterwards, Ocran told us: “We’re looking at the positives of the team showing character. 3-0 down, we laid into them at half-time, saying they’ve got to show something. All these people are watching, we have to put something in there.

“We went a bit more direct and definitely caused them much more problems in the second half. We had chances to win it, a few 1 v 1s, a few debatable penalty decisions,

“Last few games in the first half we haven’t been on it, and we can’t keep giving teams that incentive and expect to come back in the second half. There’s stuff for the management to work on in midweek.”

Clapton Community FC's @ClaptonCFC first competitive game v Hutton FC yesterday. Lashing rain and a 4-5 loss didn't ruin they day – over 400 in attendance for a club in the12th tier of the English Football structure – incredible! And more importantly a cracking day out! pic.twitter.com/T9pM2X81El

First competitive home game for @ClaptonCFC
It's finally real.
A tight 5-4 defeat against Hutton, but a great success in so many other ways.#ForzaClapton#WeAreTheClapton pic.twitter.com/vLmfLs3rXX

@ClaptonCFC showing the #football world how to be inclusive of menstruators needs! #menstrualqueens #TakeNote pic.twitter.com/jfdGdHe86n

9 goal thriller at the Wadham Lodge Sports Ground. @ClaptonCFC put in a great turn after being 3-0 down at half time out but run out of time to save a point. 5-4 at final whistle.

It was a close-run thing between three names, but Oshin won out in the end.

Today’s man of the match poll…