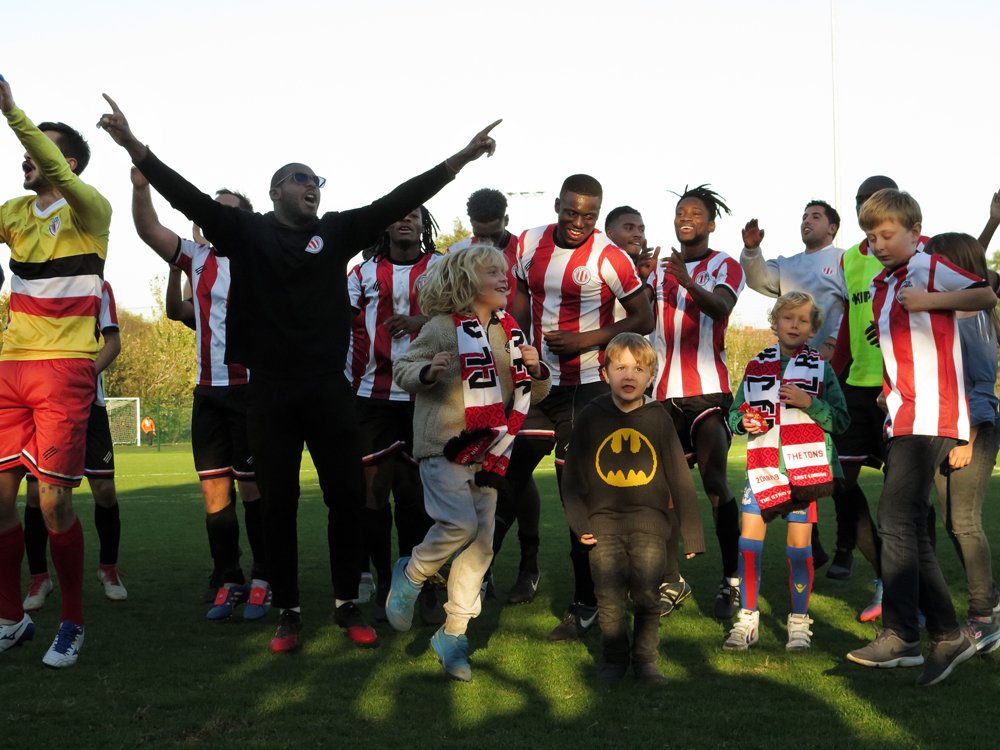 The sun gods finally decided to make their way over to E17 for a Tons home game, which helped bring out a huge family-friendly crowd for the first round of the Anagram Records Trophy against Epping Town.

There was noise from two sides of the ground with a large bloc of the Brigata Italiana behind the goal singing throughout the game, while down the side, no gazebos needed in the autumn heat.

Player-manager Geoff Ocran gave a competitive debut to new defender Jordan Odofin, who had impressed in the friendly at Walthamstow FC on Friday, while he was forced into some changes up front too with Eliot Crosbie and Stefan Nielsen unavailable. 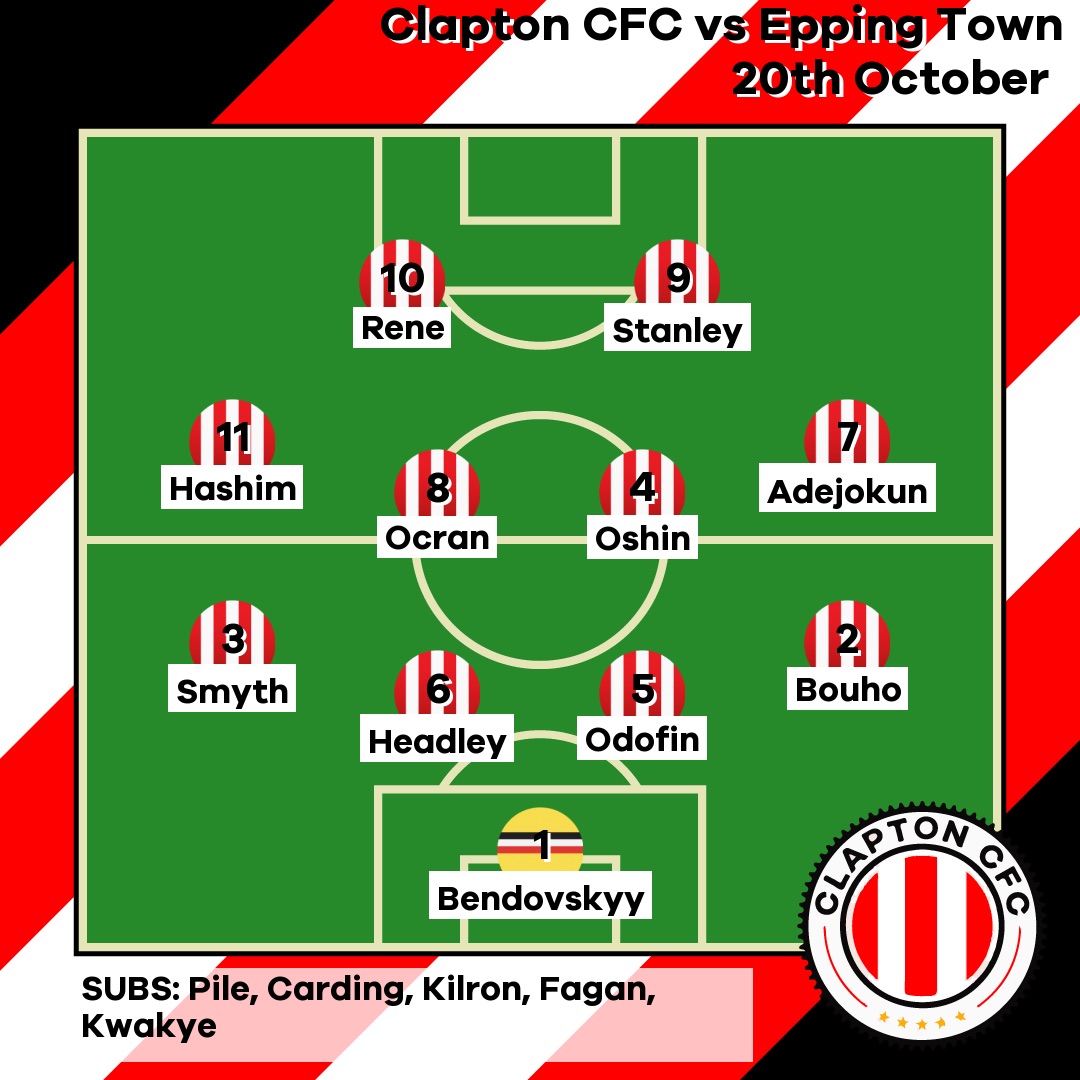 The crowds didn’t have to wait long to start seeing chances on goal, with Epping Town making an early attack, getting off a shot blocked with an acrobatic diving save from Tons’ keeper, and part time capo, Vlad Bendovskyy.

He was required to make several more stops in an evenly matched opening fifteen, with Clapton CFC making a few chances of their own through speculative runs on the wings.

Played 60/70 minutes with this… At least we won 😂😂 @ClaptonCFC pic.twitter.com/f4csFqKKiI

There was a slight worry at the fifteen minute mark as Bendovskyy pulled up with an apparent injury just after clearing the ball from another Epping attack. The club physio was called on and it was a nervy few minutes for a Tons team that had no substitute goalkeeper before he was back on his feet. Relief all round.

After the short injury break, Clapton CFC began to apply more pressure to the Epping defence. A scramble on the right side of the box saw the ball hit high over the Epping keeper, Sherwin Stanley knocked the ball down and it was a simple touch for Josh Adejokun to guide it into the back of the net. The 356 strong crowd erupted as the deadlock was broken, 1-0.

Was an honour to have this turn up at the game yesterday. pic.twitter.com/Q3mhHw7iwO

The Tons had their tails up and started making more chances. Stanley made a dash through the Epping defence and hit the ball just wide across the goal from a tight angle. A chance almost fell to Louis Rene who was able to get his foot to a mid-air ball but was stopped by the body of a defender.

However, it was Liam Smyth who was able to convert after being left with acres of room on the left hand side of the pitch. He was in a one on one situation with the keeper and neatly slotted it to the right for Clapton’s second.

From the restart Epping made a couple of speculative runs, with their number 10 striking a shot over the bar.  On the next play a long pass came into the number 7 who had managed to make space for himself but was unable to stretch far enough for the ball as it sailed wide. 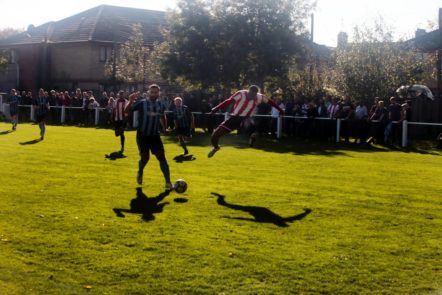 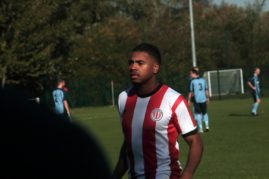 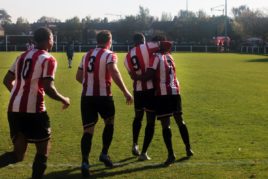 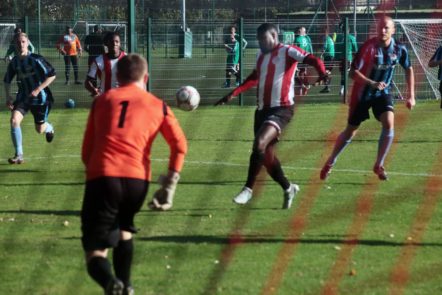 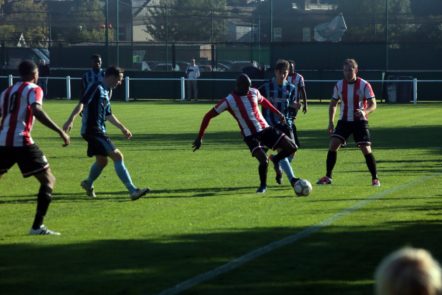 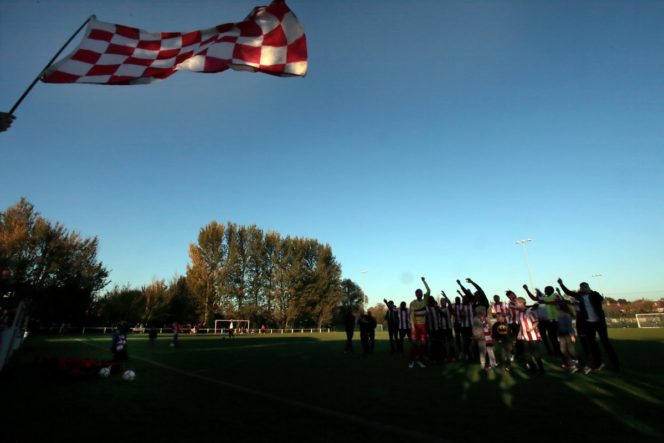 After a shaky couple of minutes, Clapton turned the dial up once again and during an extended spell of play in the Epping box, Stanley headed a ball straight at the keeper from close range, this forced a rebound which was netted off the head of Adejokun for his second of the afternoon.

In the dying minutes of the half, Clapton were briefly reduced to ten men as Dean Bouho was cut down by an opposition striker in the Tons penalty box and Epping’s number 9 earned a yellow card for shoving. Nevertheless, Clapton went into the half time break holding onto their three-goal lead.

Epping needed to repeat their feat from a friendly between the two sides earlier in the season where they had managed to come back from 3-1 down at half-time to draw 4-4.

With Clapton playing into the glare of the setting sun, Epping pushed early with their number 7 making a good run on goal from the right hand side. However, he was quickly shut down by an on-rushing Bendovskyy.

Epping tried to use their size to out-muscle Clapton and on 55 minutes Adejokun was brought down and winded outside the Epping box. Assistant manager Stu Purcell used this opportunity to sub him off.

Epping had a good chance to pull back a goal at 65 minutes with a free kick on the edge of the box. The number 17’s strike was well hit and curled over the defensive wall before sailing just over the top right of the goal.

Just over ten minutes later Clapton had their own chance from a similar position. Ocran hit a great ball into the centre of the Epping penalty area, however none of the three onrushing Clapton attackers were able to connect with it to seal the win.

With just minutes left in regular time, Epping revived their hopes when an attacker was brought down on the very edge of the Clapton area. The call was close but definitely the correct one from the referee.

Their number 10 Harry Watkins placed the ball on the spot, facing Bendovskyy and a mass of CCFC fans making extra noise from behind the goal. However his nerves held out and though Bendovskyy dived the right way, he couldn’t get enough on it to keep it out.

Epping quickly grabbed the ball and dashed back to the centre spot for the restart hoping for an unexpected comeback,  but throughout an unusually long period of injury time, it was Clapton CFC who were applying the pressure to try and make it 4.

A cleared ball fell perfectly for Smyth on the left hand side, who brought it down with one touch and fed it across to Stanley who volleyed the ball into the net, however the celebrations were stymied by the lino’s flag and the goal was disallowed.

In the last minute of the game, sub Romelle Pile made a bold pitch length run, however was held out by a defender and couldn’t get a good strike away.

After an injury time period that seemed to last an eternity, the ref finally blew his whistle and the jubilant younger Tons fans celebrated on the pitch with their team in the late afternoon sunshine.

Players celebrating with the fans pic.twitter.com/lnAqOBeaDJ

CCFC now advance to the second round, where a tough away day against defending champions Letchworth Garden City Eagles awaits them.

We spoke to player-manager Geoff Ocran and midfielder, and stand-in captain Paul Oshin, after the win.

A disappointed Epping Town manager Billy Cove said his team was “second best all over the pitch”.

He added: “Was really impressed with Clapton CFC yesterday, well organised on and off the pitch, the fans really are the 12th man.”

It was a very close run thing again but top scorer Sherwin Stanley grabbed his first man of the match award despite not scoring himself, after getting three assists.

Player of the match poll – get voting