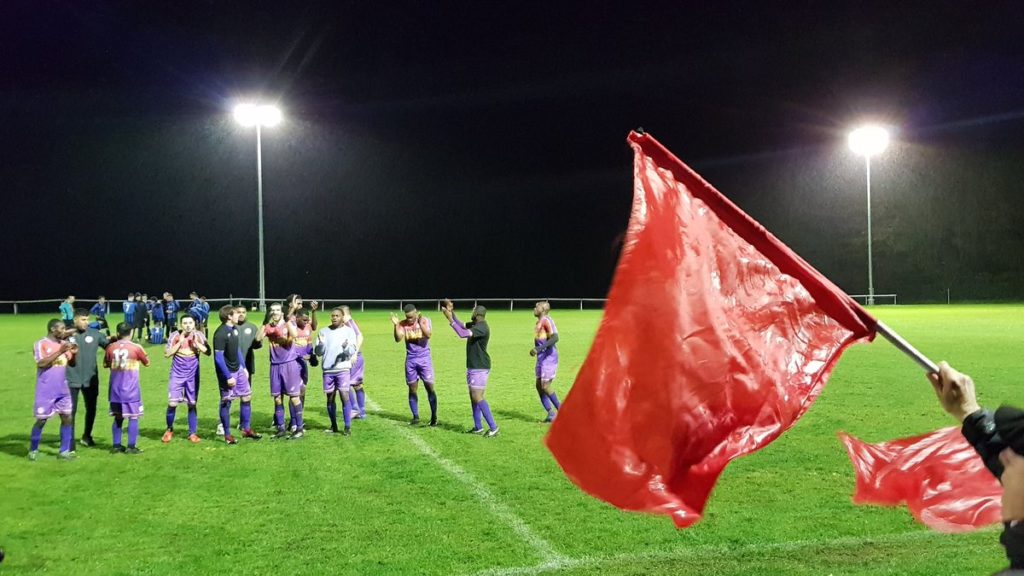 A challenging tie in the second round of the Anagram Records Trophy saw Clapton emerge with a highly impressive 2-0 win at previously unbeaten Letchworth Garden City Eagles.

Today’s line-ups away at @LGCEaglesFC in the Anagram Records Trophy.

Set to be the home side’s record ever attendance. pic.twitter.com/SYhSHhuYHm

Although the hosts had more of the ball in the early stages, the Tons looked more threatening, breaking quickly and utilising the strong holdup play of Sherwin Stanley and Stefan Nielsen.

Despite the miserably rainy conditions hampering both teams, the close control and intelligent movement of the CCFC strikeforce caught the eye.

Clapton CFC fired a few early warning shots, with Stanley blazing narrowly over from a Nielsen knockdown and defender Jordan Odofin almost connecting with a lofted free kick just in front of the opposition goalie.

On 15 minutes, the Tons took the lead in slightly contentious fashion. Dean Bouho’s long throw-in from the right hand side caused chaos in the crowded Letchworth box.

Upon first glance it appeared to bounce past the hapless goalie straight into the net, but we have to give Stanley the benefit of the doubt that it brushed his head on the way in.

As the first 45 progressed, the Hertfordshire side began to apply concerted pressure.

However, Tons centre back Odofin was an immense presence, making crucial clearances and calmly playing Clapton out of danger whenever required.

‘Keeper Daniel Anfossy also came to the rescue on numerous occasions, with one particularly crucial reaction stop from a point blank header right before half time.

Just after the break Letchworth‘s standout performer Scott Piggott, who has already notched 20 goals this season, went through on goal, but again Anfossy managed to stand up well to save.

The Garden City side continued to ratchet up the pressure and Clapton CFC seemed less and less able to break out and threaten at the other end.

On 65 minutes, Anfossy was beaten, only to see the shot smash off the underside of the crossbar and away to safety.

On 79 minutes, a Letchworth ball bobbled across the Tons box only for a home attacker to knock it against the outside of the post.

Then, with Clapton desperately, nervously hanging on to their lead, an Eagles defender tried to cut out a Romelle Pile through-pass, only for the ball to drop invitingly in the path of Stanley. The on-form Tons striker coolly lobbed the onrushing goalie to make it 2-0.

Cue wild scenes among the almost hundred-strong away support…and on the Clapton bench!

Even though the result was then beyond doubt, there was still an agonisingly long injury time to endure until the final whistle was blown and the players could join in the euphoric celebration with the fans.

That this was CCFC’s first clean sheet in a competitive match was testimony not just to the excellent individual performances at the back, but an overall disciplined and tactically astute performance.

This was a notable scalp, with Letchworth three time winners of the competition, a step higher up the league pyramid and having started their season in sizzling form.

After the game, we spoke to player-manager Geoff Ocran and player-coach Yacine Rabia, both unable to stop grinning…

Superb throughout, Odofin’s partnership with Dean Bouho is continuing to prove a solid foundation for this CCFC team.

Today’s man of the match